“It was like I was a strange alien.” Christian Burgess is reflecting on how he was perceived by the Middlesbrough players when he went on trial there back in 2012, towards the end of his second year studying history at the University of Birmingham.

His route into professional football was as far removed from the conventional one as it’s possible to imagine. And up in Teesside, he felt his background made him stand out like a sore thumb.

“It wasn’t really the norm, especially up in the north east. Me being from London, with a different accent and a different culture, was quite strange,” he recalls.

“Obviously when someone joins at that age, they ask you what club you’re on trial from. When I said university, there were a few puzzled looks. But it was good fun. They were very welcoming and helped me out with everything.”

By now, Burgess is used to being something of an outlier in the football world. If making the huge leap from the BUCS Premier North to the Championship already set him apart, his varied off-field interests only added to the sense he was different to most players. As much as he loves football, he knows there’s more to life.

The towering defender is politically active and passionate about a range of causes, including tackling climate change, supporting the disadvantaged in society and electoral reform.

With two teachers as parents, his curiosity was encouraged from a young age. He’s never been afraid to speak his mind or go against the grain, even within a typically conservative dressing room culture.

“I come from a traditional Labour-supporting family and I’ve been brought up on those values. As I’ve navigated my own way through life, I very much believe in compassion, equality of opportunity and fairness. I’d definitely associate myself with the current Labour Party,” says Burgess.

“There’s probably not many players who would stand where I am, which is strange because football’s predominately a working-class sport. But I guess in more recent times, especially with Brexit, the working class hasn’t always been voting on the left. I think it’s quite divided in general.

“I’m not sure everybody’s too concerned [about politics] either. Although we talk about it in the changing room and a lot more people are interested, singular policies tend to shape their outlook. So, what will affect them the most? I think that leads to most footballers probably voting Conservative, with the possible financial benefits that come with that.”

Whether on social media or in interviews, Burgess is vocal about issues that concern him and is pleased to see more players taking a stand. Many have shown their support for the Black Lives Matter movement, while Marcus Rashford has led a campaign for free school meals that shamed the government into action. With their status and profile, do footballers have an obligation to speak out?

“Players definitely have the platform, but I think it’s on an individual basis whether you want to use it,” Burgess answers. “What Rashford’s doing is amazing, brilliant and very brave because of the extra scrutiny that comes with it.

“It’s definitely an available option to people, and you see it more and more, especially over in America, with the big stars there making statements and standing up for things. It’s good to see, from my point of view.” 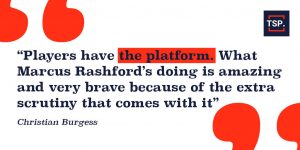 After signing his first professional contract with Middlesbrough, Burgess continued his degree at Teesside University. He’d come too far to forget about his studies and was well aware how fragile a career in football can be. On the pitch, he learned a lot during a loan spell at Hartlepool before moving to Peterborough United on a permanent deal in August 2014.

A year later, his love affair with Portsmouth began. In addition to making more than 200 appearances for the club, reversing their desperate downward slide with the League Two title and the EFL Trophy, Burgess became heavily invested in the local community. His passion for the city, its past and its people was clear to see.

“It’s just such a big club,” he explains. “It’s a dense island population – everyone’s a Portsmouth fan – and it’s really easy to get involved. It’s a lovely place to live, which makes it easier and I just felt a real connection. They were very accepting and it was a pleasure to play there. You wanted to have as much of a positive impact as you could. I threw myself into the community side of things with both feet.

“I just loved the atmosphere of the city. Everybody just wanted the same thing and wanted success for the football club. It wasn’t difficult at all to settle in and I look back on it all really fondly with what we achieved. The only regret is not going one further step into the Championship. Unfortunately, we just couldn’t get there over the past couple of years but it’s more a question of when and not if.”

Although it was a wrench to leave Portsmouth, Burgess couldn’t pass up the opportunity to sign for Royale Union Saint-Gilloise this summer.

A historic club on the outskirts of Brussels, they have ambitious plans for the future. Burgess had always wanted to play abroad and has enjoyed getting to grips with a new culture and style of football, despite some occasional difficulties.

“Before I got into professional football, I always imagined that I’d go off travelling after university,” the 29-year-old considers. “I’d always wanted to live and work abroad, and I’d always been jealous of those people who could do that. So, when this came along, I thought it was a great way to do both and to experience something different.

“Obviously, in life generally, there are a lot of changes. Just the simple fact of moving – you need a new place, you need to sort out a car, all the bills and energy suppliers. That sort of thing is always a little bit harder when it’s in a different language. Just getting to know the area and how things work. It takes time but it’s enjoyable. It’s like a new adventure. It’s been stressful at times, but the club has really helped to make it smooth.”

Coronavirus has been an added complication too.

“The only thing is I’ve not been able to go home and I haven’t been able to have visitors, like family and friends,” he laments. “When I first knew I was moving here, I sort of thought I’d be back and forth a bit more. It’s pretty easy to get from Brussels to London on the Eurostar, but unfortunately, with the world as it is today, that’s not really happened.

“It’s been slightly different in that sense, but there’s a really good group of guys here so I’ve made friends and been able to socialise sensibly. I’ve lived all over the country, up in Middlesbrough and down in Portsmouth, so there have been long periods without seeing friends and family, but this is probably the longest and the strangest in terms of the reason why. But people in all different walks of life are dealing with the same thing.”

Relocating has kept Burgess busy. He’s been taking French classes and learning to curb his competitive instincts on the pitch to take account of the stricter refereeing standards in Belgium. Players aren’t allowed to tussle for possession like they do in England. There are also fewer games to contend with, so each one feels like it takes on added importance in the race for promotion.

Union is owned by Tony Bloom, the chairman of Brighton and Hove Albion and his takeover has increased expectations. More than just reaching the Pro League, they are aiming for European qualification once they get there.

“They have a really good structure. Everything is set up to try and be successful. They have a plan to obviously achieve promotion, which is the main goal on the field, but they also have a good infrastructure at the training ground,” says Burgess.

“Everything’s there for the players to be successful and to improve. They have quite big plans if we do get promoted to build on that. They believe we can go and achieve European football, so that’s a big goal. We want to create a team that believes in the same way of playing football and that shares in that philosophy, which I think everybody does.”

For now, small steps towards that target will suffice. Burgess has made a positive impression already, adapting well to life in a new country and becoming a mainstay of the Union team.

Rejected by Arsenal and West Ham United as a young player, he was forced to take a different path. He continues to do that, on his own terms.