I’ve used this most recent period of lockdown constructively of late, quite literally in fact, helping a friend on a couple of small building projects he’s working on.

Arriving on site recently, suitably dressed in the appropriate PPE and facemask, the proprietor mentioned that he was a big United fan. “Cantona, Keane, Kanchelskis, that was my era,” he announced.

Much to my embarrassment, my gaffer for the day decided this was the perfect time to reveal the identity of the man behind the Covid mask.

“McClair over there, he played in that side too,” he declared excitedly pointing in my direction.

To which the gentleman replied: “His name might be McClair, but he never played for United.”

My modesty remains intact, until facemasks are no longer mandatory that is.

Having relived my cameo appearance on Who Wants to be a Millionaire recently, yours truly was also named as a Pointless answer (pictured below) on the popular BBC teatime quiz show of late.

Obviously none of the 100 fortunate souls asked remembers my thunderbolt of a strike for Scotland against the CIS in Euro 92, which may just have taken a slight deflection on the way. 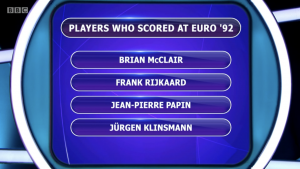 Though if someone had told me that nearly 30 years later I would be named as one of the forgotten heroes of that tournament, alongside the likes of Jean-Pierre Papin and Jürgen Klinsmann, I’d have probably taken that.

Talking of quiz questions, how many people will remember the last time Manchester United beat an opponent 9-0 in the Premier League at Old Trafford prior to the recent drubbing of Southampton?

Well, as someone who played in that demolition of Ipswich back in March of 1995, my overriding memory was, rather than taking it easy in the closing stages, I wanted to try and break the club’s all-time scoring record, which still stands at 10-0 against Anderlecht in 1956.

Though, seeing as I didn’t get on the scoresheet that day and almost everyone else did, maybe I should take some of the blame that we never eclipsed that famous landmark?

A Celtic State of Mind

I have to say, I’ve been shocked at some of the abuse that Neil Lennon has received of late from supporters of my old club Celtic and it makes me wonder what some fans’ expectations actually are?

Yes, the club isn’t in a great place at the moment with Rangers all but champions, but every manager goes through bad times and it’s no different for Lennon – just ask Jurgen Klopp.

Making a change for changes sake would benefit nobody and if Celtic are to rebuild and bounce back next year, surely it’s better to have somebody at the helm who knows the club and the players inside out.

During his time at Old Trafford, Alex Ferguson built three great sides. But there were also periods of transition where United weren’t as dominant, before, a year or two later, they would come storming back, conquering all before them once more.

Perhaps the pressure of winning ten titles in a row has proved too much in the end for Lennon’s men and there’s no shame in that, but maybe now that dream has gone, it’s time for Celtic to re-evaluate their long term goals.

Sure, they’ve dominated domestically for a decade or so, but there has been no progression in European competitions during this period which, for a club the size of Celtic, is somewhat disappointing.

When you see the likes of Ajax, who are arguably of the same stature domestically as Celtic and in a similar standard of competition, reaching the Champions League semi-final in recent years, I wonder if it’s time for the Hoops to raise the bar somewhat in terms of their ambitions.

And with the likes of Atalanta making huge strides in the Champions League recently, not to mention emerging teams such as FC Midtjylland, I feel Celtic may have missed a trick in terms of planning for the future when domestic dominance has been all but assured.

Jobs for the Boys

Much is made of former United stars getting top jobs in coaching, though I suppose if you’ve played most of your career under the guidance of a boss like Alex Ferguson, it can only increase your chances when it comes to future employment.

Personally I wasn’t surprised to see Phil land the job in Florida as he’s served his apprenticeship in the world of coaching and management, though Wayne’s appointment was perhaps more of a surprise.

Going from the shop floor into management, so to speak, can always be a daunting leap and isn’t always for everyone, though Wayne’s dedication to football can’t be questioned and his enthusiasm for the game is as keen now as it was during his playing days.

Management isn’t for everyone of course, just ask Manchester United greats Bobby Charlton and Gary Neville, whose first forays in management, at Preston and Valencia respectively, all but ended their hopes of a long and fruitful career in coaching.

Of course, working under the likes of Alex Ferguson will always stand any player in good stead heading into a management career, though they must always stay true to themselves and not simply copy what they’ve learned – even if that’s from the best there’s been.

A number of my former teammates at United have gone on to forge a career as a manager, even if I didn’t think they would at the time. The likes of Bryan Robson, Roy Keane, Paul Ince, and, of course, Ole Gunnar Solksjaer have all ended up in the dugout.

Mark Hughes was probably the biggest surprise for me as he didn’t seem to be interested in coaching before eventually becoming a student of the game and going on to manage at the highest level for both club and country.

In terms of longevity, I’d have to say Steve Bruce has probably been the most successful, though the fact Mike Phelan is still considered to be such an important part of the Old Trafford coaching setup speaks volumes about him as a character.

Mick very much thrives in that role as a number two and it didn’t really work out for him when he got the top job at Hull, though I’ve always thought that your role in football is very much determined by your attributes.

For every great manager there is an assistant whose role is equally important. The likes of Jimmy Murphy, Pat Rice or Peter Taylor for example and I’d certainly put Mick firmly in the category of a natural right-hand man.

I’m often asked if I ever aspired to be a manager one day but, for me, the thrill has always been coaching and development – a role I thrived in as reserve team manager and then Director of the Manchester United youth academy.

I quickly became hooked on spending time with young players coming through the ranks, encouraging them, cajoling them and helping them along the path to becoming a successful player.

As a modern-day manager you’re not often afforded that time and can never really build up that kind of relationship with youngsters the way you can when working in coaching or development as the likes of Matt Busby and Alex Ferguson once did.

Sure, the short-term rewards these days are better financially, but management can very much be a here-today-gone-tomorrow profession now where you don’t always get to enjoy the fruits of your labours.

Perhaps it’s just the frustrated maths teacher in me coming out. Had my hobby of playing the game I loved not eventually become my profession, that’s what I always envisaged myself doing for a living.