One of the benefits of another lockdown, if there are any, is that it’s afforded me a little more time to do the things I enjoy. This include perfecting the ratio of Weetabix Crispy Mini to fresh raspberries – personally, I find 1:1 works best.

It has also encouraged me to get out of the house and do some walking, rather like I did when all this began in March when I was pounding the empty pavements stupidly thinking, like everyone else, it’d all be over by Christmas.

So when taking a stroll along the harbour the other day, I stumbled across an old salt. Although, on reflection, he was probably considerably younger than me.

Patiently repairing his net by the waterside, he looked up at me and, obviously assuming I was some kind of kindred spirit (maybe it’s the fuller beard?) asked me what boats I had worked on.

“Paradise” and “The Theatre o’ Dreams,” I retorted.

“Where did they set out from?” he enquired.

“Glasgow and Manchester,” I replied.

His eyes narrowed, his brow furrowed and then he started to guffaw: “Very droll, very droll,” he mumbled without once losing grip of his pipe.

It would be no exaggeration to say both of my former clubs are in somewhat choppy waters this season by their own high standards.

After a run which has seen them lose three home games on the bounce, pressure has naturally increased on Celtic boss Neil Lennon after his side went into this campaign with very realistic hopes of a historic 10th league title in a row.

Of course, if you lose three games on the spin these days, you’re naturally in the spotlight for all the wrong reasons, despite what you’ve achieved in the past and even with games in hand. Playing catch-up to a decent-looking Rangers side won’t be easy.

What hasn’t helped Lennon’s cause is that Celtic have performed poorly since the last international break and if you lose and play badly, then you can always expect criticism despite suffering a number of injuries.

It’s a similar situation down the road at Old Trafford, with the knives apparently once again being sharpened for Ole Gunnar Solsjkear following one of the poorest starts to a season by Manchester United for almost 50 years.

I can’t help feeling things would have been a lot easier for my former teammate with a couple of trophies sitting in the trophy cabinet from last season – namely the FA Cup and Europa League.

Both were more than winnable for a squad which belies its current league position and had it not been for some dubious team selections, it would certainly have afforded Ole a little more time, not to mention giving the players a well-needed boost.

I’m more than aware of how winning a trophy can give a side a fillip, as well as breeding confidence throughout the entire squad; bringing with it a winning mentality money can’t buy.

United’s memorable FA Cup run in 1990 famously set the club on course for an unprecedented period of success and domination at a time when, like today, the manager was under immense pressure, with some calling for him to be relieved of his duties.

The popular myth is that Mark Robins’ winning goal at Nottingham Forest in the Third Round tie that January ultimately saved the gaffer from the chop before history tells us he went on to win the trophy at Wembley in May – the first of almost 40 in the next 26 years.

Well I’m sorry, but I genuinely don’t believe that to be true.

Having arrived at United in November 1986, Alex Ferguson had already gone about transforming the club, assembling a group of players who could be called upon to play week-after-week, whereas many of those who had gone before could not be relied upon or simply weren’t fit enough to play regularly.

He’d also put a lot of faith in the youth system which gave just a hint of what was to come in the future during those difficult early seasons.

Back then we’d be training at the Cliff and the youth team would play their games on the pitch next to us. You could see the abundance of young players who would eventually go on to have long and successful careers at the club.

This master plan was put before me when I joined United from Celtic in the summer of 1987 he Ferguson asked me: “Do you want to be part of rebuilding a football club? Because I’m going to rebuild this one.” I thought, yes, I like the sound of that.

And he was true to his word with the next 18 months or so seeing the likes of Russell Beardsmore, Lee Martin, Tony Gill and Mark Robins come through the ranks, often getting their chances due to injury and taking the opportunity with both hands to make a name for themselves whenever they were called upon.

Combine that with the fact the United board had invested heavily by bringing the likes of Neil Webb, Mike Phelan, Paul Ince and Danny Wallace to the club, meaning there was a good blend of youth and experience. 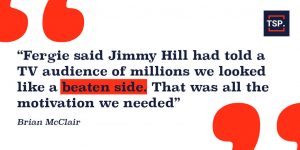 As it turned out, the league campaign that year would be a miserable one with the club dangerously close to being dragged into a relegation scrap while falling crowds and poor results meant questions were soon being asked about the manager’s position.

But to be fair to Ferguson, not once did he try and deflect the blame onto us. He took all the flak and let us get on with the one thing he believed we did best – play our football. Even the youngsters were made to feel part of the team as he had faith in their ability.

Since he’d taken charge at Old Trafford, Ferguson had very much embraced the siege mentality approach. It was us against the world in his eyes, nobody was going to do us any favours and he was going to fight our corner – an attitude that stuck with him pretty much throughout his entire time at the club.

I remember his team talk ahead of the cup game at Forest as he came into the dressing room and informed us that BBC pundit Jimmy Hill had told a national TV audience of millions we looked a beaten side in the warm-up. That was the only motivation we needed ahead of winning the game 1-0 thanks to Mark’s now infamous header.

Needless to say, any manager under pressure will need a bit of luck and we certainly had our fair share on the road to Wembley in 1990, but show me a successful side that hasn’t had its slice of bad fortune or two along the way.

I remember talking to a close associate of Fergie once and he told me he considered him to be the luckiest man on the planet: “If he fell into the Clyde he’d come up with a salmon in each pocket,” he said.

Against Forest, the home side had what looked to be a perfectly good goal disallowed. While in the next round, a rogue whistle from the crowd stopped what could have been a certain goal for Hereford but for the quick thinking of Jim Leighton.

Combine that with my scuffed effort from all of six yards at Newcastle and my equally scrappy goal from half that distance at Sheffield United, along with Oldham being a ball’s width from knocking us out in the semi-final, and you can see why some people thought our name was on the trophy.

Unlike today when a cup campaign is seen as an unnecessary distraction, that year it was a pleasant change and actually helped us to turn things around in the league too. Not long after winning away at Hereford in the Fourth Round, we finally ended a club-record run of 13 league games without a win with a hard-fought victory over Millwall at The Den.

The run was also appreciated by the United supporters, who turned up in their thousands for each of the games, all of which were away from home, and gave us fantastic vocal backing with the majority very much behind the beleaguered boss.

As for whether domestic cup success alone would be enough to ease the pressure on Ole Gunnar Solskjaer this season, I doubt it very much. Though it goes back to something I’ve been saying for most of this year – what are United’s ambitions going forward?

Under Alex Ferguson the club would set out targets, usually a top-two finish in the league and a quarter-final place of the Champions League, minimum, along with a League or FA Cup and then budget around that in terms of who they wanted to bring in and at what cost.

Fergie was very much a hands-on general manager who’d oversee almost everything from start to finish before working closely with those around him to put the wheels in motion or decide to take a different tack.

With the club’s activity – or lack of it – in the last transfer window, you do wonder what direction the club is going in and who is actually calling the shots. I fear there may not be a long-term plan, like the one being hatched back in the late 1980s, which eventually bore more fruit than anyone could have imagined.

But maybe Ole is a lucky man too. Let’s be honest, the team’s performances, not to mention the results when it’s mattered most, have a feel of those early Ferguson years about them in terms of importance.

Whether he’d be fortunate enough to clamber out of the Manchester Ship Canal with a couple of salmon in each pocket is anyone’s guess however – and for his sake, I hope he never finds out.

HEAR MORE FROM CHOCCY ON THIS WEEK’S EPISODE OF WHAT HAPPENED TO YOU?