Like most people, lockdown provided me with the perfect excuse to sit at home doing very little, while watching TV and listening to music, which has never been a problem for me before.

As my usual go-to station, 6 Music, was out of bounds because I was doing my best to avoid any mention of the pandemic. I resorted to my rather large collection of records and CDs while I challenged Amazon Echo to find me something I hadn’t heard for a while, which is pretty tough after three months.

Money Heist, Breaking Bad and even Celebrity SAS: Who Dares Wins also filled my days and got me thinking some of the contestants on these reality shows are purely famous for being famous. With the exception of a certain former member of the Crazy Gang (John Fashanu), who I crossed swords with on a number of occasions during our playing days.

I’d like to think being well-known simply for doing nothing would rule me out of the next series, though should the phone ring I suppose I could always give Ant Middleton a run for his money when it came to the fullness of our beards.

Cooking passed the time as well, which for me has always been a passion, unlike an acquaintance I was speaking to recently who, having over-indulged on Ramsay’s Kitchen Nightmares for 13 weeks, decided to come up with a culinary creation of his own.

To say this fella isn’t a dab hand in the kitchen would be putting it mildly. So arriving home excitedly from the shops with a chicken fajita kit under his arm, he was horrified to discover the thin cardboard box that had been on the shelf for the past two weeks, didn’t actually contain any chicken.

He didn’t seem to realise you actually had to buy and prepare the filling, and it was all I could do to stop him writing to Uncle Ben himself to demand his money back.

I’d be lying if I said I wasn’t excited by the return of football after the Covid-enforced break, particularly the European tournaments, which have always held a special place in my heart.

They say the strict conditions enforced are tough on the players, though the thought of spending 10 days in an isolation bubble with the likes of Steve Bruce, Gary Pallister, Bryan Robson and Les Sealey seems rather appealing to me.

On our away trips we’d always entertain ourselves with books, games and music, or as a group by arranging quizzes between players and the management staff. Though you try telling Alex Ferguson or Archie Knox they’ve got an answer wrong.

But what about the supporters?

There would have been some who’d followed my old club Manchester United right back to the days of the European Cup Winners’ Cup victory of 1991 in Rotterdam and, through no fault of their own, are now unable to watch their team… in the stadium at least.

The journey to the final in 91 provided the players and fans with some unforgettable trips to far-flung places, including Hungary, Poland, France and, of course, Wrexham, where we were required by UEFA to stay for 24 hours before the game despite it being about half an hour from where we all lived.

I’ll never forget the sight of about 20 United fans dressed as Santa Claus who had made the journey by air, land and sea to our first-round game with European giants Pecsi Munkas despite it being about 35 degrees.

Talking of that memorable run, it amazes me how little consideration is given to the magnitude of winning a European trophy these days and what a springboard it can be going forward; not to mention the impact it has on the players and everyone around the club.

During the commentary of United’s game against Copenhagen, commentator Ian Darke asked Robbie Savage if United’s players would be “up for this tournament” as they’d already qualified for the Champions League next season.

Well, I wish he’d asked me and some of the others who savoured glory in Rotterdam that rainy night almost 30 years ago the same question, as I know what the answer would have been.

Players want to win. Winning is a mentality. When you win something you want to win more. I always remember Alex Ferguson getting the players together after we’d won a trophy and saying, “we need to climb back to the top of the mountain, who wants to come with me?”

Of course, the games are being played at neutral grounds in empty stadiums, something I experienced when I was playing for Celtic back in the mid-1980s and memorable for all the wrong reasons.

In a European Cup Winners’ Cup second-leg tie against Rapid Vienna in 1984, an object was thrown onto the Celtic Park pitch from the stands and despite landing nowhere near him, Vienna striker Rudi Weinhofer rolled around on the floor like he’d been given a Glasgow kiss. 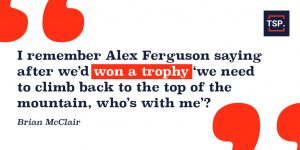 As a result, UEFA in their infinite wisdom, decided the game, which we’d won 3-0, would have to be replayed at a neutral ground – some 200 miles away at Old Trafford.

Needless to say it was like a home game with all the Celtic fans who had made the journey down the road, but it’s the little things that make all the difference. Simple factors like your pre-match routine, where you get changed and the state of the pitch, which I should have paid more attention to, as it still resembled a quagmire when I joined United three years later.

If that wasn’t enough, we were forced to play our next home European game behind closed doors too. It’s something I don’t think any player will feel comfortable doing, as a crowds can give you such a lift and intimidate the opposition, which is invaluable in Europe – probably the reason we lost 2-1 that day at an eerie Parkhead.

I’m sure there are some players who would prefer to play in an empty stadium to avoid the abuse usually thrown their way, but that’s part of the game and something young players must learn to cope with. So if crowds don’t return soon, some might take a while to adjust.

Saying that, it can be just as tough for those of us watching at home, as what I can only describe as a bad DJ tries to replicate a genuine match-day experience. I mean, how long before we hear a rendition of “you’re getting sacked in the morning” come through the speakers?

I know you can choose not to listen to these faux fans, but for me there is an easier option – it’s called the mute button. That way you don’t have to listen to the pish spoken by the likes of Messrs Darke and Savage.

Until the next time.