As Cristiano Ronaldo steered the ball past Gianluigi Buffon to open the scoring, people rushed towards the screens as if to propel themselves into the Millennium Stadium through a tear in the space-time continuum.

Spanish flags were flying, beer sprayed in every direction, one fan ripped off his shirt to flex his puny muscles in tribute to the goalscorer. It was 3.05am in Shanghai but the atmosphere was as lively as you would find in any European bar.

I was absolutely shattered. As a rookie to the European-football supporting experience from the other side of the globe, I opted for a tactical nap instead of powering through on pints of Tsingtao until kick-off. Due to the seven-hour time difference, the safest bet seemed to be an early bedtime, alarms set for 1.30, 1.35 and 1.40am, and a short taxi ride to the venue.

The rest of the city had already turned in for the night, but as we reached the destination the indecipherable din of well-oiled football fans could be heard. Inside it was packed. The crowd mainly consisted of locals and Spanish and Italian expats, but there were people from all around the world, one even sporting a Blackburn Rovers shirt.

“Are they in the Premier League?” someone asked. No. It’s a long story. 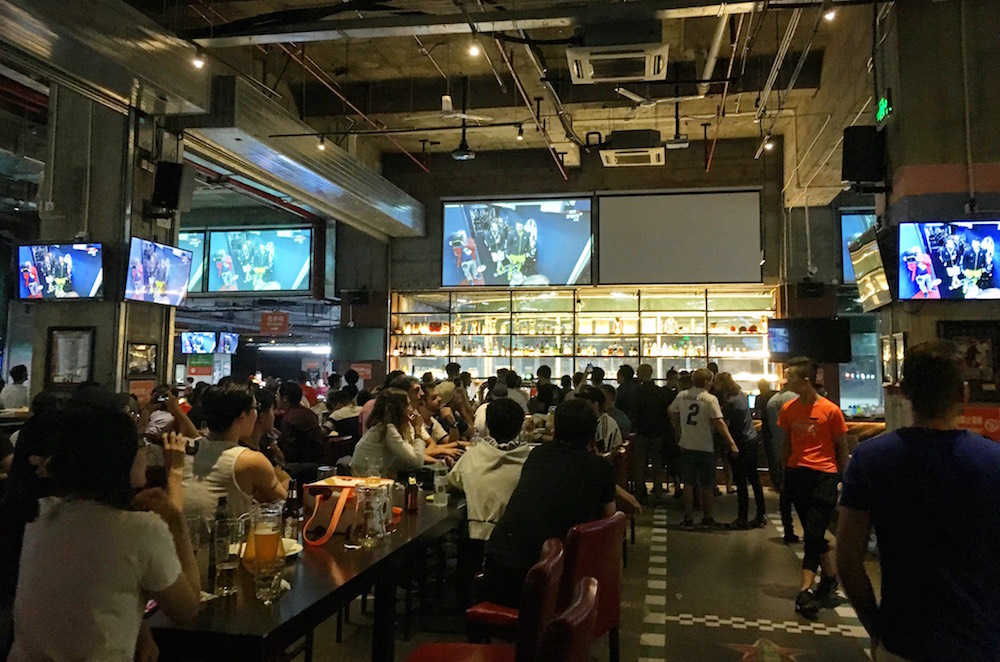 When Mario Mandzukic scored one of the most improbable Champions League final goals to equalise for Juventus, the mayhem ensued again. More beer was catapulted through the air as fans clad in a black-and-white stripes climbed onto the tables, braying like panicked zebra.

The Chinese Ronaldo-wannabe tore off his shirt again and clenched. Some people just like to support a good game – and this was a final to remember, Real Madrid running out 4-1 winners to claim their 12th title.

Away from the action on the pitch, UEFA will also have been celebrating the wider picture that was illustrated on a local level in Shanghai. In terms of appeal, the actual football on display arguably comes second these days to the clubs and personalities involved and, with Ronaldo headlining another night of narrative, the 2017 edition lived up to its soap opera billing.

It has been a carefully managed campaign to frame the final as a must-watch global event. The fixture was moved to Saturday for the first time seven years ago and it has grown as an ‘occasion’ ever since. “This is a great competition which provides a considerable spectacle,” said former UEFA president Michel Platini in 2010. “I hope that playing the Champions League final on a Saturday will give families, especially children, the chance to see the game.”

The other important consideration was that it allowed fans from all over the world to tune in without having to face work with a hangover the next morning.

The move has been a huge success. In 2009, the year before the change, worldwide viewing figures were recorded at 206 million. Last year the estimate was 350 million – more than treble the TV audience for the Super Bowl.

In China, despite a 2.45am kick-off on Saturday, there were 800 million impressions on Champions League-hashtagged posts on Weibo, according to sports marketing agency Mailman Group. Social media is another powerful tool for UEFA to utilise when it comes to hyping their showpiece event.

The biggest weapon in their armoury, though, is the elite clubs playing an essential role in the tournament’s ongoing expansion. This will come into focus once more when pre-season begins, with globe-trotting tours providing an authentic, relatable experience on which long-distance supporter engagement (and income) can be built.

European sides have pursued vigorous marketing campaigns to take their brands worldwide, and the strong local turnout in Shanghai offered proof that it pays to make the most of every opportunity. There is a reason Real Madrid changed into their iconic white kits for the trophy presentation.

But not everyone is happy, of course. For those following Champions League teams back home in Europe, it can often feel that part of the game is being taken away from them as the dependence on local support, at least from a business perspective, continues to erode.

There are different ways to look at football’s evolution, though, and for fans around the world the growing connection to their team is something to cherish. These are changing times and the internet has proven once and for all that proximity is not an essential ingredient in fandom.

That was clear at 5.30am on Sunday morning in Shanghai. As Real celebrated their victory on the podium, the club’s anthem played over the sports bar’s speakers. In that moment and the two hours that preceded it, this venue could have been anywhere in the world.

That is exactly what UEFA and Europe’s leading clubs have set out to achieve. It may have been a painful night for Juventus, but on this global scale there are no losers in the Champions League final.