You’ve stuck the ball in the net and you’re off towards the corner flag to celebrate. There’s a chasing pack of teammates on your trail and everyone’s watching. But how are you going to mark the moment? Your moment.

And then it hits you: the knee slide. Surely the most dignified form of expression, ever.

The canon of knee slides is long and varied. There’s Dirk Kuyt, for example, with his never-ender in the 2011 Merseyside derby, gliding across the turf like a Vaseline-kneed dream.

Utterly committed to winding up fans of his former club, Emmanuel Adebayor sprinted the length of the pitch before sliding his way into infamy.

But we’ve barely even scratched the surface. So elegant was Thierry Henry’s knee slide against Spurs that Arsenal built a statue in its honour. An actual statue. 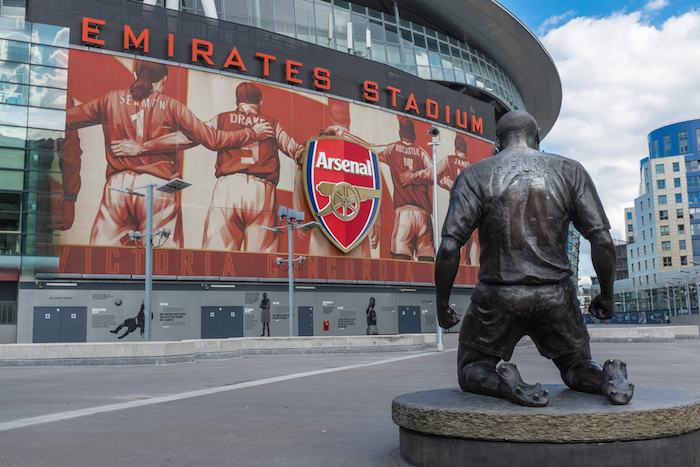 While the knee slide isn’t just limited to players – with Paolo Di Canio’s suit-wrecking slide as Sunderland manager a real highlight of the genre – it is usually reserved for those who know they’ve just done something pretty amazing.

But it doesn’t always go to plan. Some slides are cut short by terrible turf or mistimed lunges.

Some are just plain careless – almost deserving the goal itself to be immediately disallowed. Yet in a world where top players rarely seem to put a foot wrong, few things in football are more enjoyable than a truly embarrassing knee slide.

Take this season, for example. Anthony Knockaert got caught up in Brighton’s 3-0 trouncing of West Ham and went full-pelt into his knee slide despite not even being the goalscorer.

The outcome was rather less majestic than he might have intended, bouncing off the deck in an involuntary commando roll. Still, the Frenchman celebrated with his teammates as though nothing had happened.

Having a bad Sunday?

Let Anthony Knockaert’s attempt at a knee slide cheer you up. pic.twitter.com/wlZfwBMXFV

After giving his team the lead in only the second minute of the match, the adrenaline is coursing through his body. But look, there’s just enough left in the tank to pick himself up off the pitch and do a little jump into the loving arms of his Bayern teammate. Lovely to see.

Then there are those rubbish knee slides that look like they actually hurt. We’re talking potential ligament damage. Vincent Aboubakar’s effort in Porto’s Champions League encounter with Monaco is a stand-out in this grouping.

What makes this particular effort extra special is how nonchalant the striker is about the whole thing. Of course, we all know he’s absolutely gutted. He must be distraught at a knee slide gone wrong – if not more than the groundsman who’s just watched that massive chunk of his pitch go airborne.

It’s just a relief that the Porto striker isn’t out for the rest of the season with a smashed knee cap.

On the topic of near-injury, you’d rightly assume the body part most vulnerable to potential consequences of a crap knee slide is the knee itself. But this isn’t always the case. Real Salt Lake’s Luke Mulholland knows all about the variety of dangers involved.

Buzzing after finding the net, he takes a little slap on the back of the head from a teammate as he gears up for his big moment… and then it all gets a bit too much. His whole body goes limp and down he goes, belting his face off the floor on the way.

Luke Mulholland is going to win Face of the Week for all the right reasons. #RSLvSEA pic.twitter.com/VzcTf7TSDr

Whichever way you look at it then, the rubbish knee slide is a reminder that footballers are human too. We’re all just trying to get by, right? In the VAR age of removing every imperfection from the game, it’s refreshing to see footballers being unable to simply slide across a strip of wet turf. And long may it thrive on your Twitter feed.

Just remember, if you’ve scored a blinder and you need a way of expelling all that energy while looking like graceful, accomplished and an all-round legend, just try to be more Emre Can…