Update: This article was written before the tragic news that 38-year-old Erika Pioletti died from her injuries.

Fandom, what’s it really about? Where are the boundaries in support of a football team? I contemplated these issues while sitting in Turin’s Mauriziano Umberto hospital, deep into the hours of Sunday morning following the Champions League final. I watched as doctors, nurses and medical staff worked tirelessly as more and more Juventus fans limped, were wheeled or in some cases, carried in. Chaos everywhere.

The events at the Piazza San Carlo have been widely viewed by now, with numerous videos showing the utter mayhem that unfolded not long after Cristiano Ronaldo had effectively sealed Real Madrid’s victory. But the footage doesn’t really do justice to the actual experience of living it. Those initial moments when, not knowing what’s happening, you believe your life could be over.

A Juventus fan since the tail end of the Roberto Baggio era, I was bought my first shirt when I was ten, attended my first game at 18, and travelled to Berlin for the 2015 Champions League final against Barcelona to sample the atmosphere. The Berlin experience was disappointing to say the least, the weekend somewhat spoiled by UEFA refusing to stage a public screening and fans therefore having nowhere to congregate. I vowed that the next time The Old Lady made it to the final, Turin would be the place to watch it.

My girlfriend Joanna and I arrived late on Friday evening from southern Italy. On Saturday morning we took a trip to Piazza San Carlo to find fans already setting up camp in front of a giant TV screen with an assortment of sandwiches, beer, water and snacks. People were there for the long haul.

Returning four hours later, the numbers had swelled enormously and were already in the thousands. We found some friends and sat on the cobbled stones of the square, which would be our space for the remainder of the day. Upon entrance, the Carabinieri officers did a laughably inadequate job of searching for suspect items other than glass bottles. By 7pm the square was at capacity. I turned around and could see nothing but an ocean of people wearing black and white. 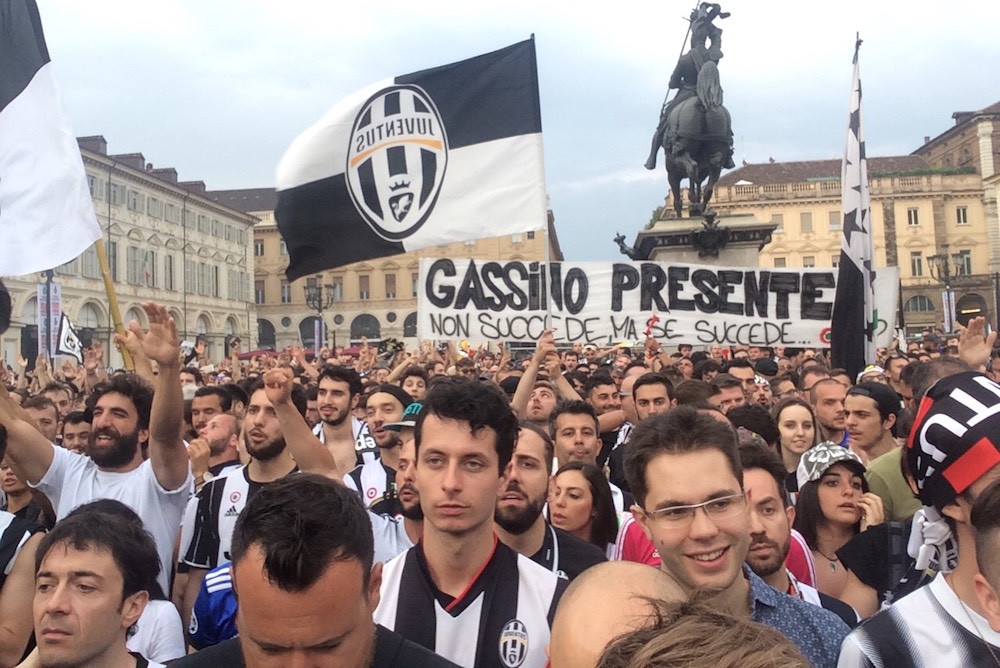 As the teams lined out on the turf of the Millennium Stadium, the atmosphere in Turin was thriving in typical Italian fashion; huge flags waved in the air and thick smoke billowed from the flares that were being set off every five minutes. This is why I wanted to come to Turin, I said to Joanna.

Yet there was an uneasiness about the sheer volume of people still being allowed into Piazza San Carlo as latecomers attempted to push their way towards the screen. There was tension as other fans, who had waited all day, understandably voiced their objections. Not ten yards from where Joanna and I were standing, one drunken fan lit a flare and promptly dropped it, struggling to put it out as it rolled along the ground towards us.

So why where we here again? Ah yes, the Champions League final. Ronaldo scored, Mario Mandzukic equalised, and then half time arrived. This was the juncture at which the night went rapidly downhill, for the team and supporters. As the second half began, space was now at a premium, with people continuing to push and shove their way towards the solitary screen.

Following Ronaldo’s expertly taken second strike, the carnival-like feeling in the square disappeared. Time whittled away, feet and back in agony from standing for hours, and the claustrophobic feeling ever-present. And then it happened.

Even now, several days after the fact, it’s difficult to articulate in any meaningful way what it is like to be involved in a stampede. An avalanche of people descending in your direction, a force that no individual could possibly stand up against. A faint crackle could be heard from our central position in the Piazza, followed by a split second of silence, and then, with no time to react, the impact.

Immediately split from Joanna, the sheer force of the crowd lifted us off the ground as we were carried in different directions. I flew through the air like a javelin – yet it almost felt like slow motion – landing on another fan with somebody then landing on me, sandwiched between a mass of human bodies.

Believing it to be a terrorist attack – and in modern times (indeed, the tragedy that occurred in London later that same night), what else would one think? – I believed in that moment my life was over. My race run.

Frantically trying to untangle myself from the growing pile of limbs, I got to my feet, fully expecting to see a car, lorry or a similar type of vehicle mowing people over. Thankfully I was wrong. Still not comprehending the situation amid the cries of hysteria, shattering glass and people inadvertently trampling over one another in a bid to escape, I began shouting Joanna’s name. The thought of her being seriously injured while attending an event solely for my sake reverberated in my head.

After desperately searching for what seemed like an eternity but in reality probably lasted only a minute, I saw Joanna walking towards one of the many columns that dot the square, shoeless with her legs and arms covered in blood. She had suffered more from the affects of the stampede, landing on the broken glass that covered the ground. That feeling of finding her is one that will never leave me.

Trying to make sense of the madness, people looked for any way out of the Piazza. The vast majority of the crowd ran in our direction, which only caused more trouble as people were now getting crushed. Panic was overriding the ability to make rational decisions. People were climbing up columns in ever more desperate attempts to escape and breathe. 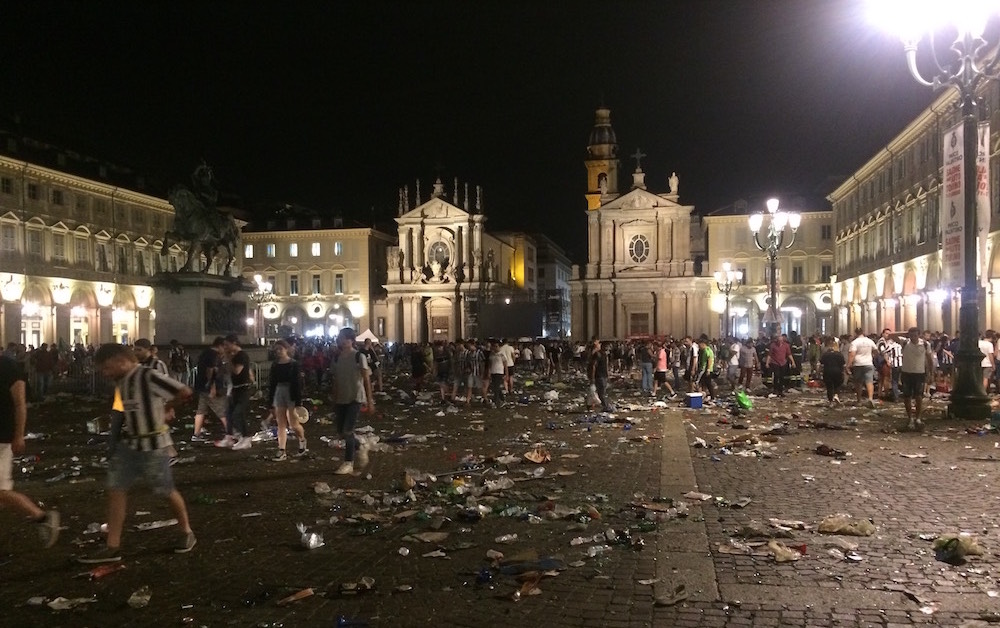 Joanna however showed remarkable calm, taking us away from the onrushing crowd and urging anyone who would listen to do likewise. We stumbled across our friends and headed for the nearest exit at the bottom left hand corner of the square.

Another bang several minutes later (believed to be a metal fence falling into the underground car park) sent more people screaming and running. Blood covered the streets; black and white shirts were now seeping with crimson.

A police car returned us to the square, where a makeshift medical tent was erected. As we waited for assistance, toe-curling screams could be heard bellowing from the tent. A man beside us had a broken arm, another had deep lacerations on both legs. We were fortunate.

People ventured back to search for bags, shoes or anything that was left behind. Rumours had already surfaced that bags were being stolen minutes after the chaos ensued.

Ambulances raced back and forth to the hospital, the sounds of sirens continuous for the next several hours. As I sat in A&E, waiting for Joanna to have her wounds cleaned, I looked around and saw a scene that wouldn’t have seemed out of place in a war film. Word then spread that a young boy and a woman were in a coma. The numbers of the injured kept rising; 600, 1,000, 1,500. For the first time I questioned my love for the game – was following a football team worth all this?

At the hospital we learned that a fan had thrown a firecracker and shouted “bomb” as a prank. The authorities still cannot identify the root cause of the stampede, but the lack of safety measures from the Turin council bordered on gross negligence. Street vendors were allowed to sell glass bottles of beer inside the Piazza throughout the day and it was inevitably this glass that caused so much suffering later when it was broken during the stampede.

It seemed nobody was turned away from the square as the crowd kept expanding. Piazza San Carlo isn’t even amongst the ten largest squares in Italy, so why were so many people – an estimated 30,000 – allowed to enter an enclosed space with only two exits. Pictures from the 2015 final show the square with two giant screens, one situated at the top end and another behind the Emmanuel Philibert statue in the centre. Had the same setup been deployed, it may have helped to spread people out and avoid the crush.

Juventus, too, have rightly come under attack from fans, many asking why the club didn’t open the Juventus Stadium for the final. In comparison, Real Madrid staged a live-feed of the game at the Santiago Bernabèu and over 80,000 fans saw their side win a twelfth European Cup in comfort. With multiple screens on display none of their fans missed out on the action: no glass, no overcrowding, no mayhem.

While the night was traumatic for everyone involved, it could have been much, much worse. All the ingredients were there for tragedy and the fact no one died is nothing short of miraculous.

The club has said next to nothing on the issue; a comment from Max Allegri here, an Instagram post from Claudio Marchisio there. It’s left a very bitter taste in the mouths of many. Emotions are still raw, and understandably so, but there’s now a certain amount of ambivalence towards the club from people who lived through the horrifying experience. A sense that Juventus should have looked to safeguard their supporters.

Where is the limit in fandom? How far do we go to support the teams we love while ignoring personal safety? My limit is reached.