The man sitting beside me has travelled three hours after work on a Tuesday from the outskirts of Calcutta to watch the one game in the whole football calendar that he cannot miss. He has probably taken a half day pay cut for the journey.

Several hundred more arrive in trucks from other parts of the city to taunt the opposition fans and display a show of strength in numbers. People with drums enter the stadium in processions that look more suited to a traditional Indian wedding.

It is Derby Day in Calcutta and although the East Bengal and Mohun Bagan fans display an outward confidence, none can contemplate losing this game. The ‘Calcutta Giants’, as they are called have been fighting for footballing supremacy in the city since the first derby was played in 1925 and the supporters have been there with them all the way. When East Bengal, the team of the upstarts, thumped the ‘national club of India’  5-0 in the Calcutta Derby in 1975, the Mohun Bagan players had to seek refuge in the tourist boats that can be found in the Ganges. They would stay there for days in order to avoid the wrath of their stunned supporters. 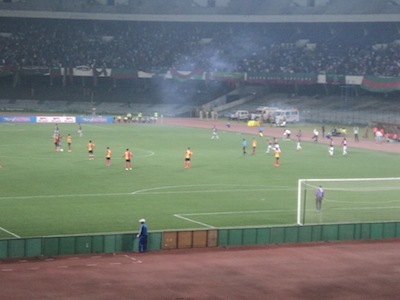 Mohun Bagan are known as the ‘national club of India’ not only because they are the oldest football club in India (established in 1889) but also because they were the first team made up entirely of Indian players to have beaten an English team. The beat the East Yorkshire Regiment in that famous game in 1911 to win the IFA Shield and from that day, they became one of India’s most prestigious clubs.

East Bengal on the other hand was established in 1920 as a rebel outfit of Jorabagan Club and in 1924 when they were about to gain promotion into the first division, Mohun Bagan voted against their entry, creating a simmering hatred between the two clubs.

Not that the supporters needed any encouragement to hate each other. Mohun Bagan is seen as the club of the Calcuttan whose ancestors have been in the city for more than century. East Bengal was always seen as the club of those from Bangladesh. Post-partition, the number of East Bengal supporters ballooned as the refugees poured in. Tensions have eased a little since then, but before and after match days, the rivalry splits friends, colleagues and even families. 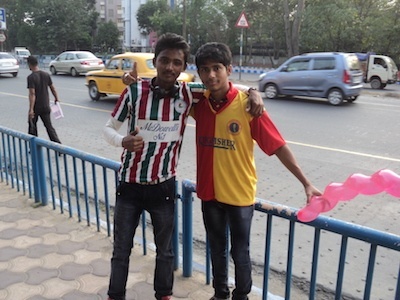 The game today is an I-League encounter. The I-League was established in 2007 and neither of the two teams has ever won the trophy, although they are the preeminent clubs of the country. Local newspapers often publish articles expressing lament that the I-League has not been won by a Calcutta club even once, but you can be quite sure that the fans of the two clubs would not want their hated rivals to be the first to do so. The Calcuttan is proud of his city, but he is not foolish.

Three hours ahead of the kick off at the ‘Salt Lake Stadium’, the Mohun Bagan bus arrived and a horde of their fans could be seen rushing towards that bus before the police could arrange their barricades.

The men in uniform were furious with the club officials, who had failed to inform them about their arrival. One of the private security guards at the stadium told me that providing security for the Mohun Bagan team bus is not a part of the job he likes. He supports East Bengal.

East Bengal’s manager Armando Colaco, who had won the I League 5 times with other clubs, had been unable to replicate the magic in Calcutta and some of the men sitting around me suggested that he did not quite understand how the derby works. The football however was the farthest from the minds of most fans at the stadium. Many understand the game, many don’t, some don’t even know the name of the players and more often than not most supporters come to the stadium purely to see their opponents lose.

The match got underway under lights, but darkness would have descended immediately in the Mohun Bagan stand had East Bengal forward Ranty Martins been able to take his chance in the first minute. The man beside me was unconcerned though. He kept telling me that there was absolutely no way that Mohun Bagan would be able to score a goal. 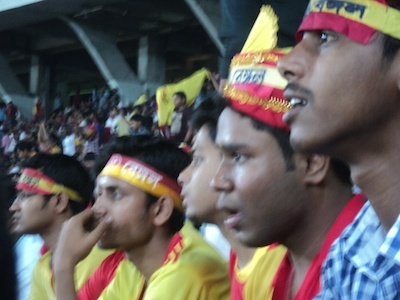 ‘They simply don’t have it in their blood,” he assured me. “They can’t take advantage of our slips.’

But he was wrong. Cameroonian Pierre Boya headed in the first goal from a corner midway through the first half. The man next to me was visibly shocked, as was the rest of the East Bengal contingent in the stadium.

East Bengal equalised seven minutes later through Nigerian Ranty Martins. Fittingly it was from a corner, parity restored in the most absolute terms. But that was the end of the excitement. The game was no classic as the two teams played out a dour draw with hardly any chances being created in the second half, not that you would think it from the noise in the stands.

Both sets of supporters felt that they should have won the game, as is the case with all derbies but none of them said a word about the standard of the football.

“Quality does not matter”, said the man who had travelled for three hours. “What matters is the club. I merely came to the stadium to watch Mohun Bagan lose. I support Manchester United in the English league. I watch the Spanish league for Messi and Ronaldo. I know all about the quality…”

None of the big cities in India can claim a derby match like this. Manchester United, Liverpool, Barcelona and Real Madrid remain the biggest draws for most fans in the country, but while Calcuttans watch all of that, in their hearts East Bengal or Mohun Bagan still command their loyalty. The Calcutta Derby is not for the neutral.

Have you been to the Calcutta Derby? What are your memories? Share them with us, please, by emailing [email protected] or clicking this.