When talk of football fans returning to stadiums began in July, it didn’t sound much fun. Reports suggested supporters would have to sign a special code of conduct before entering less-than-half-empty stadiums, there’d be no ‘limbs’ when the goals went in, there were even rumours singing would be banned.

But when it’s been more than 170 days since the last Premier League game to have fans in attendance – Aston Villa’s trip to Leicester on 9 March – even the opportunity to get back to a stadium and watch a pre-season friendly was impossible to turn down. I was even willing to sign away my right to chant if necessary.

Of course, Brighton’s game against Chelsea was anything but routine. Yes, Timo Werner scored his first Chelsea goal after four minutes, £34m summer signing Hakim Ziyech had to go off injured early in the second half and Brighton put together some nice moves but lacked the finishing touch (no change there, then). But this game was always going to be more remarkable for what happened off the pitch than on it.

As part of a government-approved pilot, 2,500 tickets – less than 10% of the stadium’s full capacity – had gone on sale to season-ticket holders a few days earlier, with those who’d amassed the most loyalty points over the years getting first dibs. The game only sold out on Friday morning, when points requirements were taken out of the equation – suggesting there’s still some reticence around attending events that wouldn’t fit into your average back garden.

Even under normal circumstances there are fairly draconian rules around what you can and can’t take in at the Amex Stadium – bottle tops, for example, are treated like Class A drugs – but there’s never been a dress code… until now. Outside, stewards positioned in close proximity to hand-sanitising stations reminded anyone arriving from the station that masks were mandatory around the ground.

Even 20 minutes before kick-off, the train itself, which would normally resemble something arriving into London Waterloo on a weekday morning, wasn’t overly busy. Although people were having to stand by the doors.

With only a fraction of the usual 30,000 people to ferry to and from Falmer – and the club encouraging people to drive, where possible – it was always going to be less sardine-like. But if limits on the numbers are to be gradually increased, out-of-town stadiums such as the Amex may have to consider staggered arrivals of some sort.

Apart from briefly lowering my mask at the turnstile to prove who I was for track-and-trace reasons, it remained in place until I reached my spot in the upper tier of the East Stand. The club had only sold every fourth seat, with each row staggered so the people sitting in front and behind occupied the middle of the three empty seats, ensuring everybody had a mini-exclusion zone around them – no groups allowed. 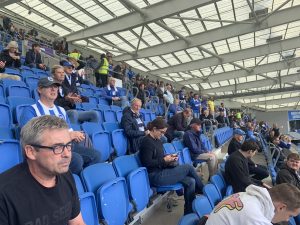 Even when it’s full, the Amex is hardly La Bombonera, but singing wasn’t outlawed and the crowd wasted no time acknowledging the weirdness of the situation in the only way it could. With no away fans present, chants of “can you hear the Chelsea sing?” and “1-0 and you still don’t sing” rang out after Timo Werner’s early opener, which some sections wrongly believed to have been offside. This gave them an excuse to get on the linesman’s back early on, more to make up for lost time than any genuine grievance, but it helped to create a better atmosphere than at many more well-attended friendlies in the past.

With fewer people to maintain the momentum and the two teams seeming to take turns with spells of possession, there were understandable lulls in noise that were reminiscent of watching a game on TV without the fake crowd sounds turned on. A reminder of just how unusual watching football has been in the past few months.

It dropped noticeably about halfway through the second half when both teams had changed their line-ups entirely and Chelsea, in particular, resembled an under-23 side. Brighton even managed to use three different goalkeepers over the course of the 90 minutes after Maty Ryan’s initial replacement, Christian Walton, landed awkwardly soon after coming on.

Back-up centre-half Shane Duffy used the break in play to stick the ball in the back of the net a few times, each one greeted with growing cheers from the fans behind the goal – everybody was just pleased to be back.

With the game heading into its final stages, supporters were asked to remain in their seats until the gangways were clear to leave, the Amex PA promising post-match interviews with both managers in an attempt to stem the rush. Having seen how people stampede off planes I wasn’t expecting it to have much effect, but not many people seemed in any real rush to leave, the newly perspex-protected kiosks doing decent business.

Due to the size of Falmer station, the club has always been good with this kind of thing anyway, encouraging fans to stick around and debrief over a pint after the game while the train queues die down. Assuming this experiment is deemed a success and people return in larger numbers, crowd control will be more important than ever, so this could be a tactic employed at more grounds where space allows for the necessary social distancing. 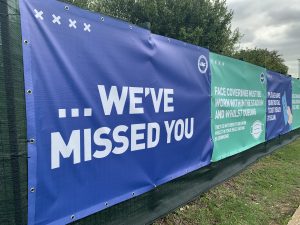 With 89 minutes on the clock, Brighton’s young Irish striker Aaron Connolly was brought down in the box and the Seagulls were awarded their second penalty of the game. Unlike Neal Maupay earlier in the half, Pascal Gross made no mistake and emphatically dispatched his spot kick past Willy Caballero in the Chelsea goal.

Under normal circumstances it would’ve meant almost nothing, but as an unusually loud chant for a pre-season friendly rang out, it was quite clear that the assembled faithful were celebrating much more than just a last-minute equaliser.