Northampton, Middle England, the big town on a small island but so far from the sea that the coast could be a myth. Nowhere, everywhere, sweating with the disorientating, landlocked euphoria of World Cup fever. Go to Northampton if you want to see England.

Noted graphic novelist and Northamptonian Alan Moore believes the East Midlands market town is the centre of the earth and wrote a 1200-page book, Jerusalem, on the subject. 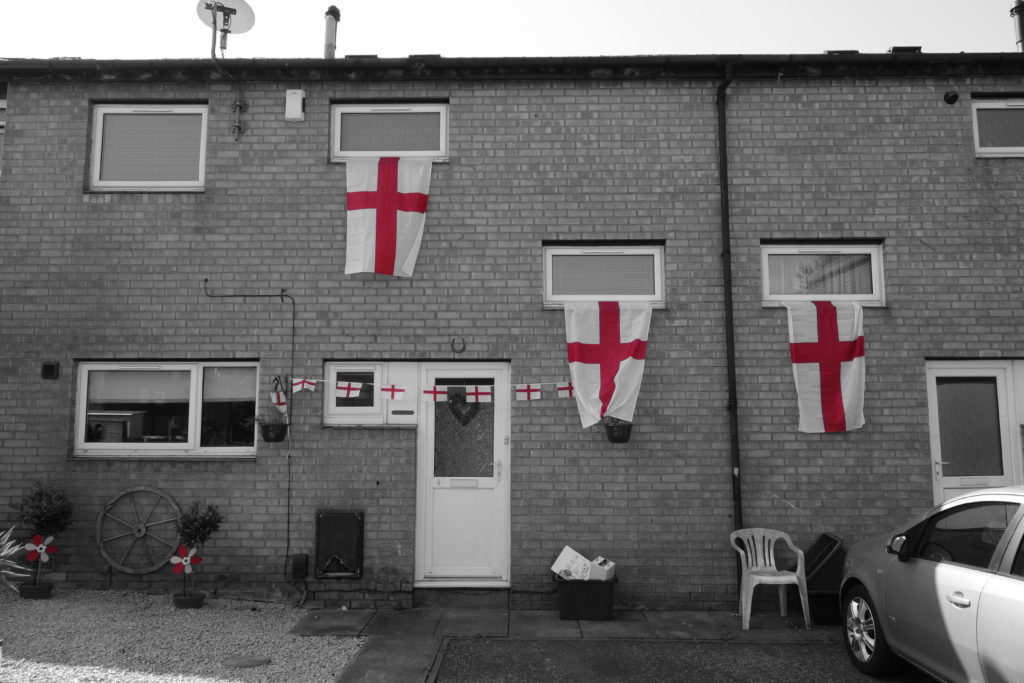 Perhaps he’s right and Northampton’s looming National Lift Tower is a beacon. In 1980, Linda Jardim released a song sponsored by the town’s now defunct Development Corporation called ‘Energy in Northampton’. Jardim sang about aliens fleeing a neutron war being seduced by Northampton’s wonders and technology. It was mainly played to bemused Londoners on the capital’s radio stations as Northampton looked to recruit overspill workers in the Thatcher era.

Fast forward to 2018 and Northampton is by no means lacking energy, with the aliens having either departed for new universes or assimilated into local life. The pubs are packed all over town and the retro chant “football’s coming home” fills the air along with the sound of plastic beer glasses pattering on pavements as Gareth Southgate’s team perform wonders in Russia. But what does “it’s coming home” mean when you’re already at the centre of the universe? 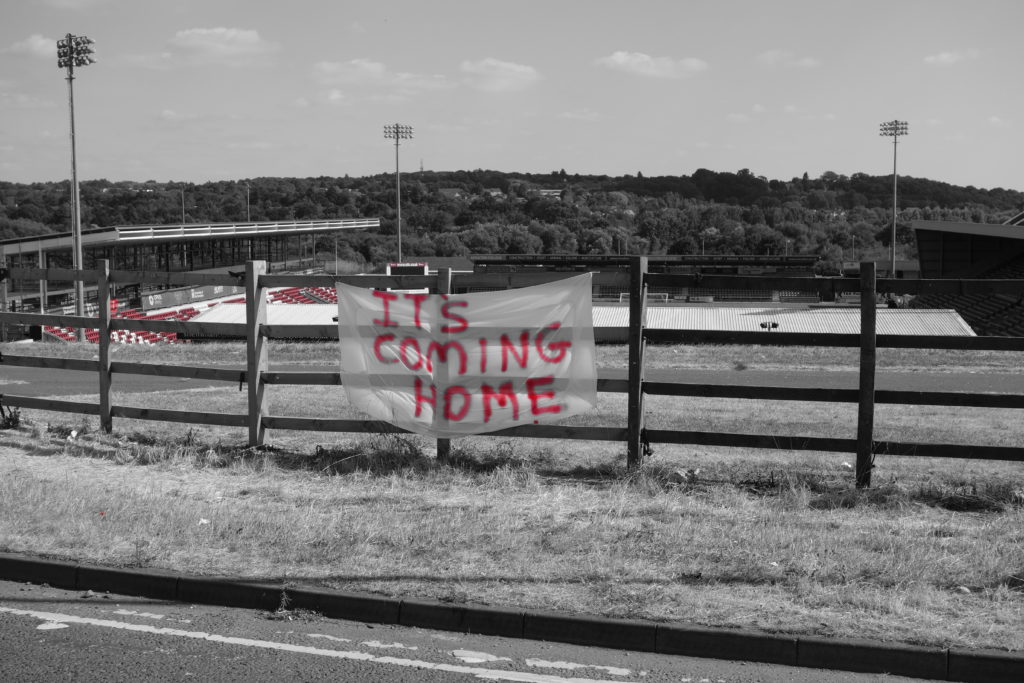 Eddie lets out a contemplative sigh in the Old Bank pub when asked what victory at the World Cup would mean to him. He’s wearing a 1982 Admiral England jersey and remembers life in that decade, when Northampton rapidly expanded to serve the logistics and distribution industry. He’s lived through its financial and civic contraction too.

“It’d mean a bit of pride back in the old place; we’ve lost our way,” he says while rubbing his bald head with the weary wipe and exhalation that Northamptonians have mastered.

Did you vote for Brexit? “Yes, 100 per cent. One hundred per cent. The way I see it, the ship might be heading for the rocks but we may as well be at the wheel when it does.” 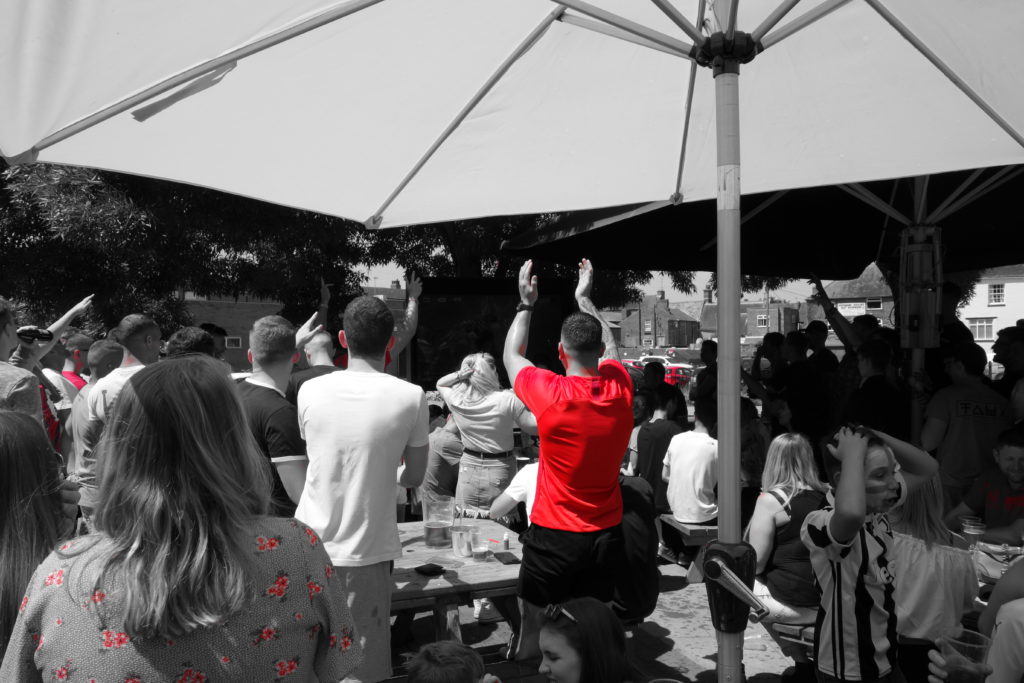 There’s unease over the direction of this town slap bang in the middle of the country. The Northamptonshire County Council is effectively bankrupt with debts of over £1 billion. Northampton North MP Michael Ellis is the Libraries Minister in central government, yet the council have proposed ditching 21 libraries in a desperate bid to save money. They have also lost nearly half the social workers they recruited in the past year. Years of strangling austerity have hit this heartland of Conservatism hard.

The former Tory MP David Mackintosh stood down in 2017 as part of the fallout over the ‘missing millions’ scandal, which saw a £10.25 million council loan for Northampton Town’s proposed stadium redevelopment go AWOL. Mackintosh has been voluntarily interviewed by police about the missing money which nearly crippled the League Two club, although he denies any wrongdoing. 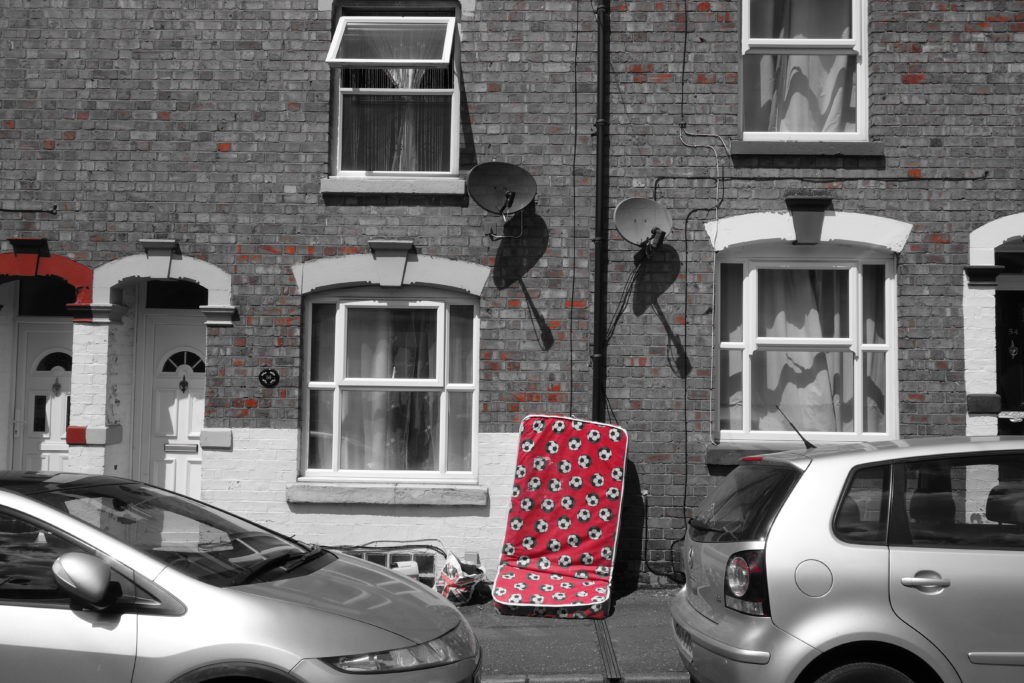 Also interviewed under caution was Northampton Borough Council’s former Chief Finance Officer Glenn Hammons, who publicly admitted accepting – and not declaring – hospitality from Howard Grossman, the man into whose company most of the funds went. Just a couple of years before this World Cup, supporters of the local football team were rattling buckets in order to save their 121-year-old club. Public squalor in a world of private affluence, as sports writer David Goldblatt has put it.

Meanwhile, the town’s old shoe-making centre is down at heel. Marks & Spencer is closing its large store on the main shopping strip, next door to the one left vacant by BHS. Chinese tourists take taxis from the train station to the high-end factory shops of shoemakers still in business, but they never stick around for long. 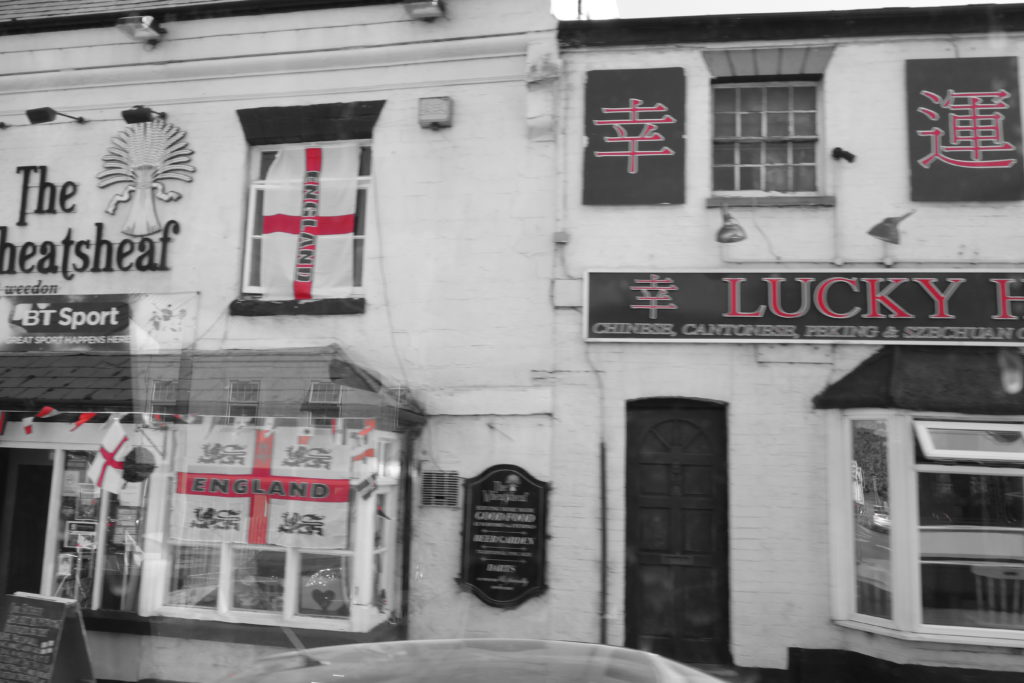 The industry is a shadow of its former self. Once a significant employer in the town, it was damaged by the 1960s buyouts by J Sears and Co, who valued the real estate owned by the various shoemakers as much as the businesses and employees.

This is an everyday town with dysfunctional political and economic processes hanging over it like a never-ending heatwave. Northampton hasn’t escaped the knife crime epidemic, with recent stabbings resulting in the deaths of two local youngsters.

Out in the council estates on the Eastern District, built to house the overspill workforce at the time of the ‘Energy in Northampton’ track, the grass grows long due to mistakes made with the outsourcing of environmental services. Fly-tipping is rife, the paving slabs are cracked, and the once modern houses look tired. The Development Corporation used to keep the place tidy, but the community is now fissured from right to buy neglect. 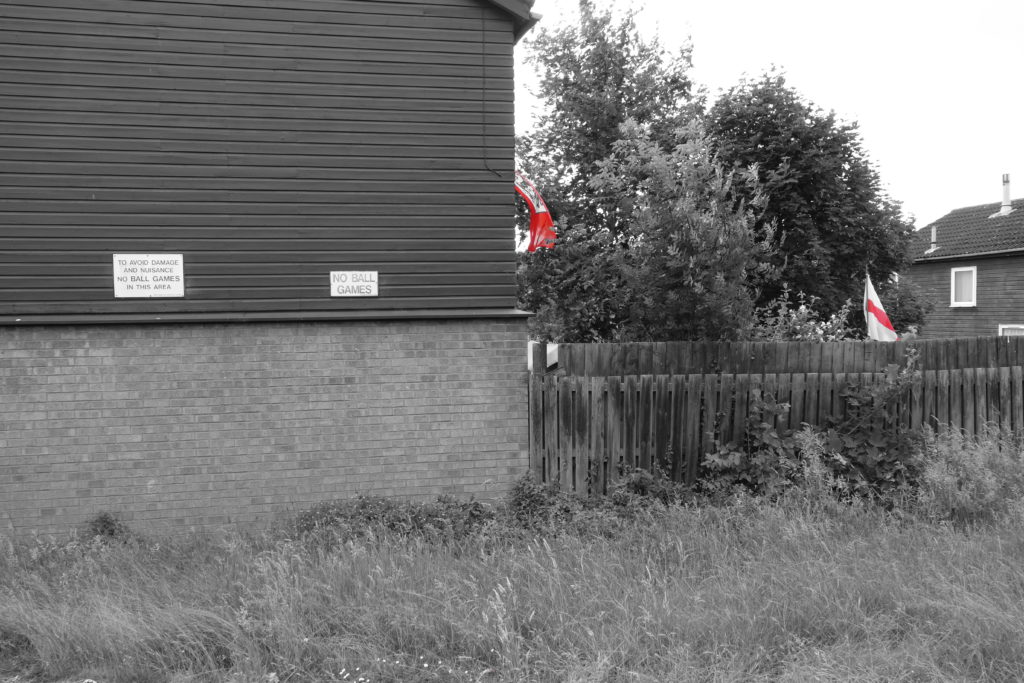 And yet St George’s flags flutter from the windows of houses in these lost neighbourhoods. Although England appears to have forgotten them, the people here haven’t forgotten the concept of Englishness wrapped up in a red-and-white nylon sheet.

But is this belief in a resurgent England team just blind faith, like the faith in a positive outcome of a hard Brexit? Or is it something more, something closer to hope mixed with stubbornness and pint glass gripping anxiety?

Northamptonians are known to be difficult folk, a trait which dates back to the autonomy of piecework shoe manufacturing. The Freeman shoemakers decided what hours they worked and often took Mondays off. In the 19th Century, atheist MP Charles Bradlaugh faced four successive by-elections for insisting on affirming, rather than taking, the religious Oath of Allegiance; each time the Northampton populace voted him back into Parliament. Bradlaugh’s statue stands on Abington Square, his finger outstretched as if commanding the town’s inhabitants to retain their doggedness. 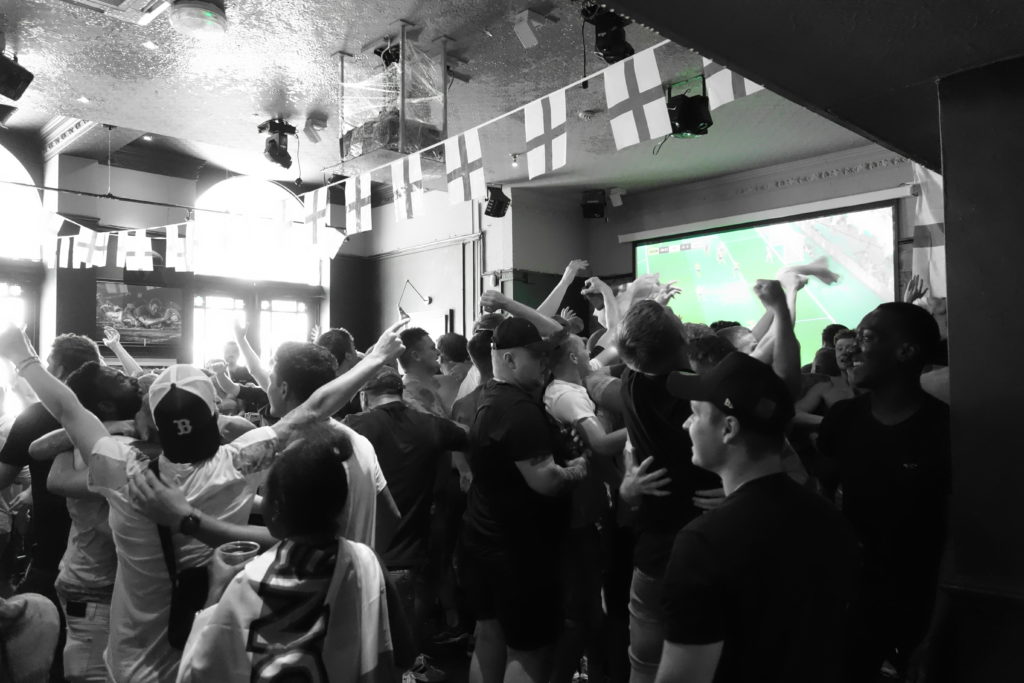 England failed to win the World Cup, despite fans’ resolution not to lose it. In an instant, Mario Mandžukić’s extra-time goal pierced the membrane that the ‘it’s coming home’ phenomenon had created.

Devoid of a 37cm gold trophy, the people in Northampton’s unremarkable footballing orbit are left with the realities of the town’s years-in-the-making social problems, all while cradling the fragile factors underlying national pride.