Bayern Munich might be targeting European glory and international expansion but, for many local supporters, the amateur derby against city rivals 1860 still means so much more…

On a bright, clear morning in the Munich suburb of Giesing, small groups of ultras in black jackets and blue and white scarves converge on the meeting point.

“Today is our chance to prove that 1860 is the number one in Munich,” they say. “At least in terms of support.”

Half a mile down the road outside FC Bayern München’s Säbener Straße headquarters, past groups of riot police kitting up in the back of their vans, a similar scenario is unfolding. Here though, the scarves are red. “People claim that Munich’s proper football fans are blues,” they laugh. “Let them think that.”

Since TSV 1860 München were relegated in 2004, there have been no more Munich derbies in the Bundesliga. The two sides met in the quarter-final of the DFB Pokal in 2008 – a re-taken penalty from Franck Ribéry in the 120th minute proving the difference in a 1-0 Bayern win. “They’ve been down there for over ten years now and they can stay there,” says home-and-away Bayern fan Tobi. “We don’t need them.”

But in the absence of Bundesliga derbies, the meetings between Bayern and 1860’s second teams in the fourth tier Regionalliga have taken on an increased importance. Between November 2013 and November 2015, up to 12,500 supporters attended the Amateurderbies at Munich’s old Stadion an der Grünwalder Straße, with tensions often boiling over between the two sets of fans.

“Sechzig are Munich’s working class club,” says 1860 fan Johannes, referring to his club by their colloquial nickname, Sixty. “People in the inner-city areas like here in Giesing support Sechzig. Of course, the Reds do have support in Munich too but they tend to come from the surrounding areas.” 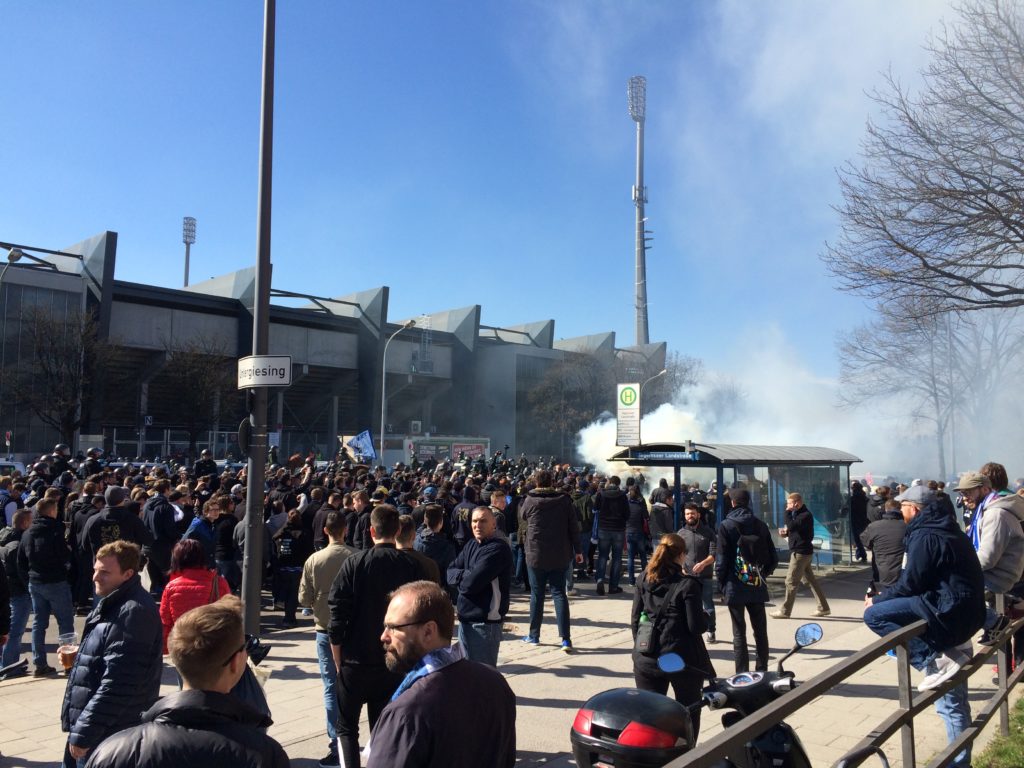 Inevitably, Bayern also attract substantial support from elsewhere in Germany – and all over Europe too – giving rise to the claim that Munich itself is blue.

“Our regular away following has a Munich-based core obviously but it also includes fans from all over the place,” explains Tobi. “You see them at every game, no matter what, no matter where. That doesn’t matter.

“Tickets can be difficult at times for the more glamorous games but if you’re in the right circles and know the right people, they get passed around. People look after each other. It only ever gets really tight against Dortmund or big European games.

“The worst one was the that bloody ‘Finale dahoam’ or whatever they called it,” he says, remembering Bayern’s bitter defeat to Chelsea in their Champions League “final at home” in 2012. “It seemed like every company in Munich had tickets to give away to employees or business partners who had never been to a Bayern game in their life. It was a joke.”

Even Sechzig fan Johannes has some sympathy. “We do have some respect for Bayern’s proper hardcore,” he says, begrudgingly. “The 3,000 or so who were in London last week for the Arsenal game for instance – fair play to them for paying those prices and travelling everywhere. Even when the game was meaningless. They’re good fans. The rest are just glory-hunting tourists with too much money.”

Today though, there are no tourists or half-and-half scarves to be seen as the two sets of fans reach the stadium simultaneously. “Death and hate to FCB!” chant the Sechzig supporters, adding a friendly: “Beat the reds to death, sha la la la la!” Blue and white smoke bombs are set off and eggs filled with blue powder are hurled towards the Bayern fans entering their turnstiles, but the presence of 400 police officers prevents any serious escalation.

By way of comparison, only 250 police are present at Bayern Munich’s Bundesliga home games. But it’s precisely the sterile, commercial atmosphere of the Allianz Arena which the fans want to escape. “Watching the amateurs is refreshing, something of a relief,” explains Tobi. “A chance to get away from all the hype that surrounds Bayern and the Bundesliga and just watch football.”

When the football gets underway, 1860 take an early lead but the atmosphere remains largely peaceful – a significant departure from previous meetings where flares have been thrown between the fan blocks and hooligans have attempted to break down fences. In the second half, the Bayern fans in the main stand unfurl a banner: “The Sheikh calls and his camels follow” – a provocative reference to their rivals’ new owner. 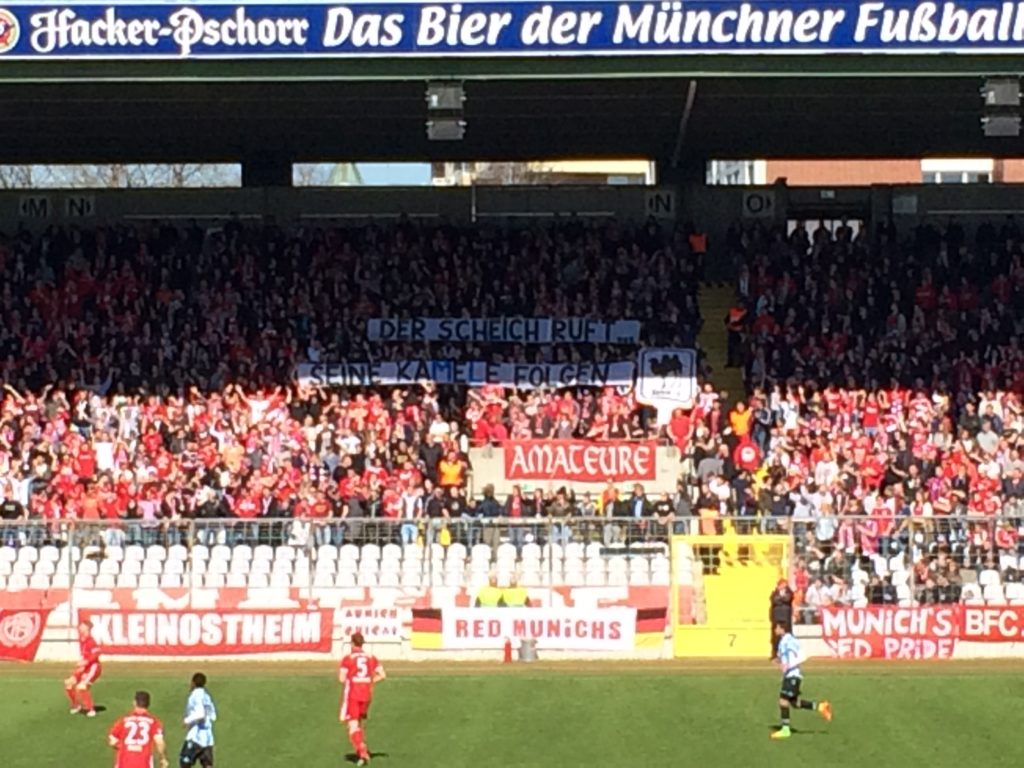 In 2011, with 1860 Munich on the brink of bankruptcy, Jordanian billionaire Hasan Ismaik took over 60% of the club – albeit with only 49% voting rights in order to uphold German football’s 50+1% ownership rule. But Ismaik’s reign has been blighted by controversy from the very start and 1860 – German champions in 1966 – have become the basket case of German football.

A total of 13 managers have been dismissed since the takeover while 1860 have dropped into the bottom half of Bundesliga 2. Only a last-minute winner in the relegation play-off against Holstein Kiel in 2015 prevented a drop into the third tier. This is the situation former Liverpool CEO Ian Ayre has arrived into following his appointment as 1860’s managing director in February.

This season, the club have written even more negative headlines due to their relationship with the German media. Local newspapers Müncher Merkur, Tageszeitung and BILD München were stripped of their permanent accreditations whilst one journalist was refused entry to the club’s home game against FC St Pauli earlier this month after she reported on alleged bullying in the squad.

At the same fixture, visiting St Pauli board members were asked to move from their seats after celebrating their team’s goals in the 2-1 win too exuberantly and too close to Ismaik. “When respect and freedom of expression are sacrificed at the altar of big money, good night football in Germany,” said St Pauli sporting director Andreas Rettig in a statement. Süddeutsche Zeitung has referred to Ismaik’s behaviour as “Trumpian” whilst kicker magazine has announced it will refuse to conduct any interviews with 1860 Munich players or staff.

“What do I think of him? Absolutely nothing,” says Sechzig fan Johannes, shaking his head. “We have no idea why he’s here. Maybe he wants to knock down the old Grünwalder Stadion and build a supermarket in its place, who knows? We’d rather have been relegated to the Regionalliga than take his money.”

It’s not just fans and rival clubs who have a problem with the current regime at 1860 Munich. As the Lions wrap up a 2-0 victory in the second half and more smoke engulfs the away end, a watching Bundesliga scout explains that mismanagement at the club has had a negative effect on young players, too.

“1860 have neglected their youth players for so long,” he explains. “They are all well-developed footballers and technically very good but the whole structure at the club is a mess and has been for years, so no-one takes any notice of them. And before the investor arrived, the best players were sold off anyway because the club was broke.” 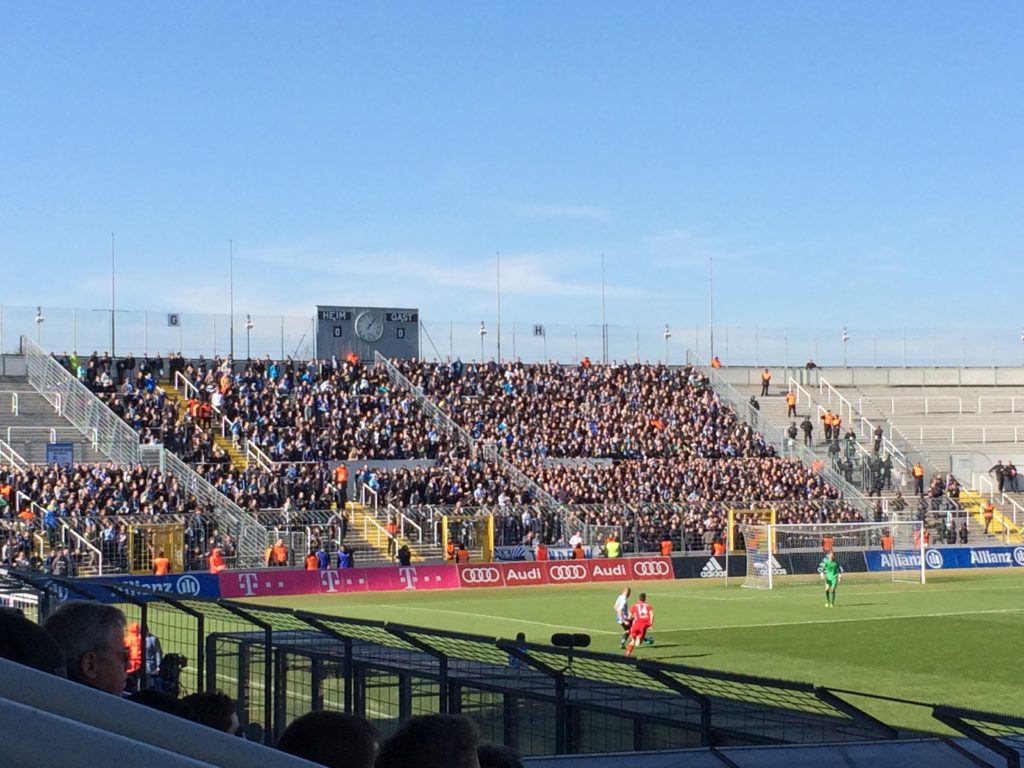 The derby isn’t just important for the supporters; it’s a chance for Munich’s young players to put themselves in the shop window in front of a big, hostile crowd.

“This is one of the most interesting arenas for Bundesliga clubs,” continues the scout. “Both of these clubs have outstanding records of producing high quality players.

“I saw Julian Weigl play in this game a few years ago and he stood out a mile – cognitively he was miles ahead of the rest. He knew exactly what to do with the ball before it came to him. That’s what we’re looking for – speed, both physically and cognitively. Without that, you can forget it. Then, if the character is right too, there’s a chance.”

If 1860 have failed to make the most of their young players’ potential, city rivals Bayern are determined to take advantage. With an average age of over 27 and the retirement of captain Philipp Lahm and midfielder Xabi Alonso looming, Bayern’s first team squad is in need of fresh blood and club president Uli Hoeneß wants to plug the gaps internally.

“This is a new chapter in the history of FC Bayern,” he told Munich’s Tageszeitung last week. “A chapter in which we want to cut down on big transfers by developing our own players.”

With a new €60 million academy centre nearing completion and Bayern’s junior A and B teams both top of their respective leagues, the future looks bright – but Sechzig fan Johannes is less impressed: “We’ll have proper derbies against them again one day, though. Give it a few years and we’ll be back!”

But, as the young 1860 Munich players celebrate their victory with the 2,500 fans behind the goal, a Munich derby in the Bundesliga seems further away than ever. For the time being, the question of red vs blue in Munich will continue to be an amateur affair.