In 2009, economist Stefan Szymanski and football writer Simon Kuper co-authored the acclaimed book Soccernomics, an analytical dive into the beautiful game. Little would they have expected their work to be the choice of reading for a 11-year-old boy. When Ashwin Raman found the book by chance at a relative’s place, it was the start of a journey that sent him down the rabbit hole of football.

Six years later, Ashwin (pictured below), now 17 and living in Bangalore, is still in high school, graduating next year. He is mulling over his university plans and in his free time, watches football by the bucketload.

So far, this sounds like the life of most teenagers his age, but the similarities end there. Because he is also working as a part-time performance and data analyst for Dundee United, a Scottish Premiership team. 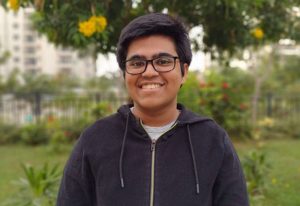 In November 2020, Ashwin tweeted a screenshot of his Football Manager 2021 profile as evidence of his role at the club. Most football fans would understand its significance.

The game, renowned for its immense detail and database, offers fans around the world a chance to test their knowledge. Although he had mentioned his job on Twitter previously, he’d never gone public about the identity of the club. Until now.

“I screamed out loud when I found out I was in the game,” says Ashwin. “I was asked to give my details, but I never imagined myself in the game. The concept of being able to hire myself was astounding. I was absolutely jubilant and couldn’t sleep until 5am.”

It’s provided him the opportunity to hire himself in the game and give himself a virtual wage hike. If he ever needed proof that he’s achieved something, this was it.

It is ironic that Ashwin’s first purchase of the game was only in 2019. But he has been analysing football for years.

“After reading Soccernomics, I moved on to Soccermatics and sites like Statsbomb. I then just started writing in June 2016, becoming a pretend Statszone,” he explains.

He initially started writing for Chance Analytics, a blog that provided him with a wider platform. Blogging also allowed him to refine his writing and hone his skills. A Chelsea supporter, Ashwin said, “I didn’t know anything about football before because I only started watching in 2014.”

It didn’t take long for him to find his niche. He quickly moved on from nostalgic deep dives to transfer explainers.

“There aren’t many people who’d want to read about Dynamo Kiev in the 1980s,” he admits. “But there are a bunch of people who want to know what’s happening with their club’s transfers.”

What distinguished his work was his use of data visualisation, content that was easily shareable and striking. While many writers tend to overcomplicate their work, Ashwin wrote in simple terms. It was this ability that caught the eye of Stevie Grieve, Head of Analysis and Opposition Scouting at Dundee United.

Guess who’s on FM21! I’m so thrilled! My ‘negotiation’ attribute is hilarious though, considering how I might be the worst at negotiating on the planet 🙂 pic.twitter.com/IAAn5OS0FG

“I’ve followed his work on Twitter for a long time and thought his work was quality. A lot of people put good work online but if it takes 10 minutes to understand, it’s pointless,” explains Grieve. “Ashwin was very good at writing informative pieces that were easy to understand. It’s the best quality of his work.”

Grieve contacted Ashwin in October 2019 asking him if he’d like to join the club to work under him. Both he and the Sporting Director Tony Asghar look to hire proactive people and Ashwin fit the description perfectly.

His role largely revolves around scouting and talent identification; Ashwin searches for suitable players on Wyscout, a football platform, through a combination of video and data scouting. He is also involved with data analysis, where he helps provide data visualisations of opposition teams. It’s all about finding that competitive edge through means that have become popularised in recent years.

Working at a football club might be daunting for some, but the nature of this job has cushioned any anxiety – his new role is not all that different to the writing he was already doing.

Remote working takes away any on-site pressure, while reporting to just one person provides clarity and direct support. Grieve offers Ashwin plenty of freedom and flexibility in his work, as he trusts him to know what standard tasks have to be done.

“I might need to give him a reminder – at 17, you still need somebody to give you a nudge every now and then. But you don’t hire intelligent people to tell them what to do,” says Grieve.

“You hire them so that they can do things that I wouldn’t have considered. There are tasks that need to be done – regular team reviews, for example – but he can do things he’s interested in too.”

He has maintained the tricky balance between school and work well. He once went three months without working, as he had to study for his exams. Grieve has been impressed by the speed and clarity of his work so far.

“With some people, you need to spoon-feed. But Ashwin isn’t like that. If given a piece of information, he can run with it. He’s able to figure what it means and how it helps. That’s a really good quality to have,” says Grieve. “It’s why his age and location doesn’t concern us. It’s [about] the quality of his work.”

It’s a feeling echoed by Ashwin. He’s adapted quickly to his first job.

“I think I’m far better at approaching a data set or video now than I was in October 2019,” says Ashwin. “I know how to get straight to the point and I know how to look for what people need now.”

It’s these skills that led Ashwin to unearth Norwegian Jens Petter Hauge, a now 21-year-old who was available for half a million at the time. The attacker was signed for £4.5 million by Italian giants AC Milan in October 2020.

It amounted to nothing for Dundee United, but it was evidence that Ashwin was on the right track. Grieve revealed that Ashwin sent him five players to look at this week, four of who were already on the club’s radar. They’re working on the same page.

So, does Ashwin plan to go into football after education?

“Football still seems like a back-up option for me,” he answers. “I have a foot in the door, but I don’t know if I want to realistically pursue it. I plan to study social sciences in college and am just looking for natural progression.”

He has now become the public example of how football blogging and hard work can land you a role at a football club. As the Kylian Mbappe of football analysis, he is now the role model to so many. He’s just here to enjoy the ride.