Not many people know Andy Gray has something in common with Cristiano Ronaldo and Gareth Bale, but as the Scottish goalscorer points out “it’s not bad company”.

The former Aston Villa, Wolves and Everton striker won the PFA Player of the Year and Young Player of the Year awards in the same year in 1977 – as did Ronaldo in 2009 and Bale in 2013 – and is in fine form as he recalls a career that didn’t take him out to Real Madrid like the other pair. Alas, he tells the latest episode of What Happened To You? that he wouldn’t change it for the world. 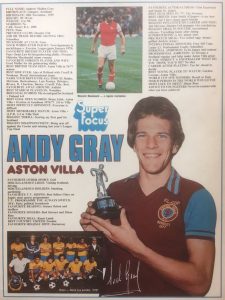 While he’s now more well-known by younger football fans for his tactical analysis on Sky Sports (and subsequent exit) Gray casts his mind further back to his life as a player, discussing how his life – and football – has changed since he broke on to the scene.

As well as the regular questions about his changing car habits, music tastes and favourite travel destinations, Gray also opens up about his thoughts on modern football and the way punditry has developed since he became the forefather for TV analysts. 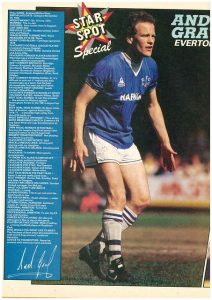 Gray also went through a series of the questions he answered during his interviews with Shoot and Match back in the seventies and eighties, and discusses some of the key moments during a goal-laden career. Including why he always ran out fourth when going on to the pitch…