What’s the first thing that springs to mind when you hear the name ‘Adrien Gulfo’? Come on, don’t be shy now. We know it is difficult to just pick out one thing, but do your best.

We jest, of course – you have probably never heard the name before in your life. And why would you have? After all, Gulfo is a defender from Switzerland who has had a rather unremarkable playing career in the regional leagues of his home nation.

Yet even if you do not know him by name, there is a good chance that you will have seen Gulfo at work on at least one occasion. That is because this otherwise ordinary footballer once produced one of the most extraordinary own goals ever seen on a football pitch.

The highlight (if we can all it that) of Gulfo’s career to date – and, let’s be honest with ourselves, he is unlikely to ever better it – came in a match between FC Renens and the gloriously named Pully Football. In fact, this incident was perhaps the most notable thing to have happened in the history of either club (although we are happy to be proven wrong by the throngs of die-hard Pully fans on Twitter). 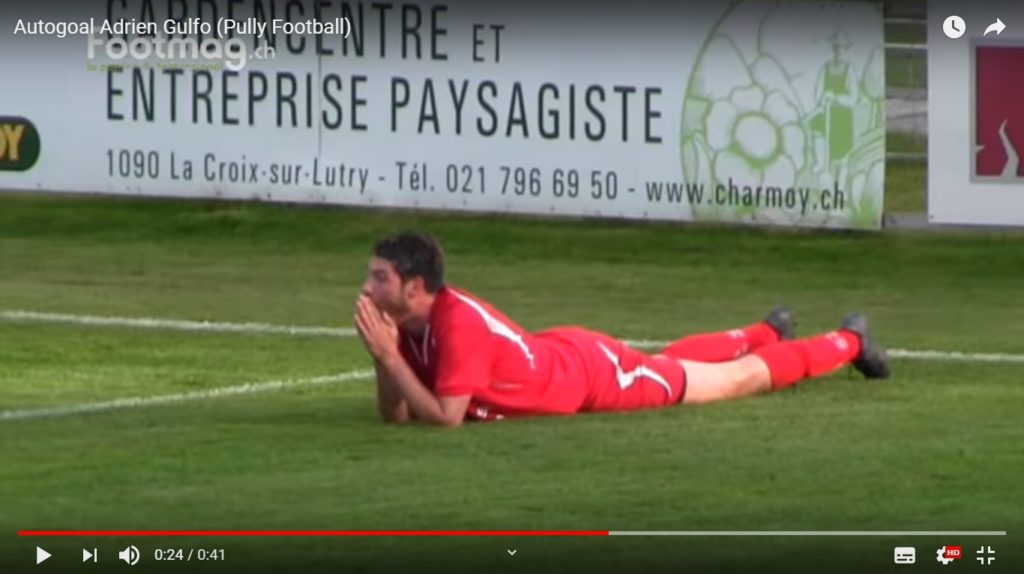 As Renens’ No.16 sends the ball across, the first thing we notice is that Gulfo looks to be in complete control of the situation. Actually, no, the first thing we notice is that this looks like a really well-maintained pitch for what we are pretty sure is semi-pro football. Oh, and that we wouldn’t mind living in Switzerland if this is the attention to detail they give to activities which, in the grand scheme of things, are not that important to wider society. If they take this good care of their athletic facilities, imagine how amazing everything else must be. Get us to Switzerland. But anyway, we digress; back to Monsieur Gulfo and his crowning moment.

Gulfo’s first touch is ungainly but salvageable, the ball looping up in the air but, significantly, away from the opposition attacker. There is nothing to be overly concerned about here – just send the ball out wide, prevent the opposition from winning a corner, and everyone’s a winner. That task list should not be too difficult to carry out.

Instead, Gulfo makes the most classic of errors, overcompensating for the first mistake by making his next touch so extravagant that people will forget what came before. In fairness to the defender, he did actually succeed in that regard – albeit not quite in the manner he would have wanted. Not only have you already forgotten about that first touch, but you have probably forgotten everything else you have done this week. But you do remember your own name, right?

There is no longer any past, present or future; only Adrien Gulfo, acrobatically sending a stylishly-executed bicycle kick into the corner of his own net.

You could show this clip to the finest geometry experts in the world and none of them would be able to explain how Gulfo, from his starting position, could send the ball where it ended up. As it hits the net, we see our protagonist lying flat on his front, his thought process presumably somewhere in between “what have I just done?” and “shit, is this being filmed?”.

We can even see the Pully goalkeeper, who did not dive for the ball – because, honestly, how can you be prepared for something like that? – turn back towards his team-mate as he walks to pick the ball out of the net.

It is hard to tell whether the initial feelings of disbelief and anger are giving way to efforts to comprehend what his colleague has done, because even if he did attempt to find answers he would surely come up empty.

The hardest part to understand, though, is the concentration on Gulfo’s face as he approaches that second touch. His eyes are firmly on the ball throughout, as if every single aspect of the connection is exactly what he was aiming for. How do we square that with the end result? It is impossible – and, quite frankly, we are not sure we even want to. It is better this way. After all, who would have ever watched Gulfo play football were it not for this moment?