Among the Juninhos, the Asprillas, the Klinsmanns and the Zolas of this blog series, you won’t find many full-backs. Goalscorers, creators and showboaters can rely on their enduring YouTube-friendly appeal. Goalkeepers often turn out to be memorable whether they like it or not. Even the defensive midfielder – traditionally the unsung water-carrier of the engine room – finally became something of a precious commodity once Claude Makelele had brought his brand of tidiness to the Premier League.

So where does that leave the humble full-back? Sufficiently underappreciated that no-one’s even sure if they deserve that hyphen or not (let’s stick with it for now) but, like bookends or bedside tables, still nice to have on either side when you need them. But not all full-backs are equal. On the right side are the steady eddies, the occasional overlappers, Gary Neville. Over on the left, as if you’ve crossed into a different global hemisphere, lies another sub-species altogether: one responsible for a disproportionate number of Premier League screamers and peaches of crosses.

One theory is that the pool of left-backs has historically been enriched by failed wingers (rather than the repurposed centre-halves on the right), who make up for their defensive naivety with forward-facing endeavour. But why not get yourself a man who can do both? A man who will just as happily thunder in a 30-yarder as rearrange your tibia and fibula.

The Stuart Pearce backstory ticks some serious Proper Football Man boxes: rejected by QPR as a youth, training instead as an electrician while turning out for non-league Wealdstone (plus the occasional stint in goal for pub side Dynamo Kingsbury Kiev) before being catapulted to the top flight with Coventry at the age of 21. Their manager Bobby Gould – whose properness as a football man is well established – was sufficiently impressed to pay £30,000 for Pearce, a not-inconsiderable sum to a fifth-tier club in the early 1980s. He even threw in an anecdote for free:

“I went to see Stuart Pearce play for Wealdstone on a stinking night at Yeovil. After ten minutes he put in a thundering tackle and the winger landed in my wife’s lap. I said to her: ‘That’s it, I’ve seen enough.’”


Two seasons at Coventry proved to be an adequate audition at the top level and, in 1985, Pearce signed for Nottingham Forest, not so much a highly-rated prospect as a mere makeweight in a deal for Ian Butterworth.

From the vault, Stuart Pearce advertises in the programme… pic.twitter.com/2d5bGsV77m

Only one of them would go on to become a Forest living legend but, for now, the young electrician hedged his bets. 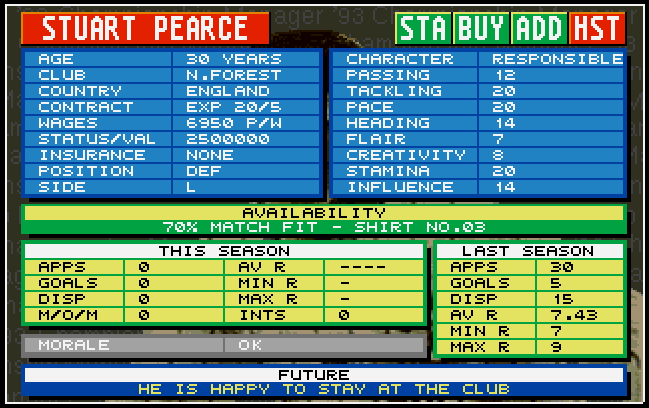 1990 seems an ideal place to start when examining Pearce’s footballing existence in more detail. Having established himself – and a fearsome reputation – with club and country, he endured what long threatened to be his defining moment: that penalty, thundering against the legs of Bodo Illgner, which set England on the way to shootout defeat against Germany at the World Cup.

A footballing nation despaired in unison, only for that to give way to tribal schadenfreude once domestic matters resumed. “Stuart Pearce is a German,” sang the opposition crowds, but this wasn’t a man likely to hide in his shell to avoid the flak. In fact, his response was to score a scarcely believable 16 goals – from left back – in all competitions, with not a single penalty among them.

20 – Stuart Pearce scored all 20 of his Premier League goals with his left foot,. Lash. https://t.co/QfS5akTmE9#OptaJoeYearbook #AskOpta

A free-kick at Old Trafford was the most notable of Pearce’s silencings, and somehow made even better by Martin Tyler’s slightly Partridgean commentary:

Pearce’s goalscoring threat was no secret, and he wasn’t one to mix things up. The lion’s share of his 99 domestic goals (he would be denied a century by missing a penalty in his final game in 2002) were made up of two devastating templates.

Firstly, some of the most no-nonsense set pieces football is ever likely to see. Dead balls around the margins of the penalty area were Pearce’s staple diet, traditionally a position where the task is to get the ball up and down as artfully as possible. Pearce wasn’t fussed about up and down, just through and in – as his certifiable belter against Tottenham in the 1991 FA Cup final demonstrated.

To avoid any retrospective suspicion that Pearce might have been something of a one-trick pony, his other trademark gave the impression of a rather more subtle ball-player than his notorious physicality suggested. Whenever the scruff of the game’s neck dared to show itself, Pearce was likely to be first in the queue to grab it, usually by means of a right-then-sod-this change of gear, a one-two with Nigel Clough, and then a finish any Premier League striker would be satisfied with:

Unsurprisingly, for a man of such deliberate earnestness, Pearce’s approach to celebrating his goals was similarly straightforward. There was the occasional smile, but mostly he’d attempt to march back to his own half despite having half a dozen awe-struck teammates climbing all over him.

That leads us nicely to the other half of the Pearce armoury. Bobby Gould’s Wealdstone scouting report wasn’t a one-off: Pearce appeared to enjoy a textbook reducer just as much as a 20-yard free-kick (immensely, that is, but not letting his face show it in the slightest.) The start of the Premier League, and his regular place in the England team, perhaps reined in his reckless streak a little, but that came far too late for hobbling opposition wingers of the late 1980s. One can only hope that Leicester’s Paul Reid doesn’t wake up in cold sweats after being the victim of this brutal pair of yellow cards:

Looking back, Pearce is happy to admit to his merciless philosophy in the art of defending:

“I’ve got a reputation, yes, but I think I’ll be remembered as someone who played the game hard but fair…maybe hard and not fair at times, but I’ll live with that. I never went to Lancaster Gate for a disciplinary hearing and I only ever got sent off five times, which in the modern game isn’t too bad.”

Forever woven into the fabric of Nottingham Forest, no matter which division they toil in, Pearce remains a one-club man who just happened to play for five other clubs. Offers from bigger clubs came in, some were even briefly considered, but all were turned down until he finally flew the nest in 1997 at the age of 35 to join Newcastle:

One particularly curious option was a bid from Japanese outfit Vissel Kobe in 1995 – one can only imagine how the J-League would have taken to the sheer velocity of an angry Stuart Pearce.

Naturally, Pearce fully bought into the local rivalries in his role as Forest’s leader and talisman, and was keen to remove any doubt about his feelings for Derby County, telling the Guardian recently:

“No disrespect to Derby, but I have to say I could never work for that club in any capacity. And I mean never. People might say I’m being ridiculous but that’s just the way it is. Even if I was desperate and they were the only club around, I couldn’t do it. I’d rather go on the dole and take my chances.”

“Away at Derby used to be the highlight of the season for me. Christ, they bloody hated me. But for me, that’s what football is all about.”

Looking back, Pearce represents something of a nostalgic conundrum for the 90s-literate football fan, now being weaned off the concept of a Proper Football Man. You felt you should be proud of Stuart Pearce – certainly if you were a Forest fan – and even prouder of his proudness.

Trying, and failing, to comprehend just how scared this referee was of Stuart Pearce at this precise moment. pic.twitter.com/Xp8MRH19zW

Should full-backs ever feel the need to establish a union to promote their underestimate worth to society, Stuart Pearce would almost certainly be its general secretary.

Just don’t ask him to smile while he goes about it.

For the next instalment of ’90s Heroes, check out the Bet Bright football blog on Friday.