“The most natural finisher in English football”. So frequently was Robbie Fowler festooned with that label that, as his career went on, it threatened to become a backhanded compliment; the striking equivalent of being considered “a good shot-stopper”.

For four years in the mid-1990s, however, Fowler’s billing was justified. Unlike some other vague footballing qualities – genuine pace, an eye for goal, giving you that something different – there was some solid logic behind his notable penalty-area instinct. That it manifested itself so early and so spectacularly in his career is what makes Fowler such a fascinating 90s case study. 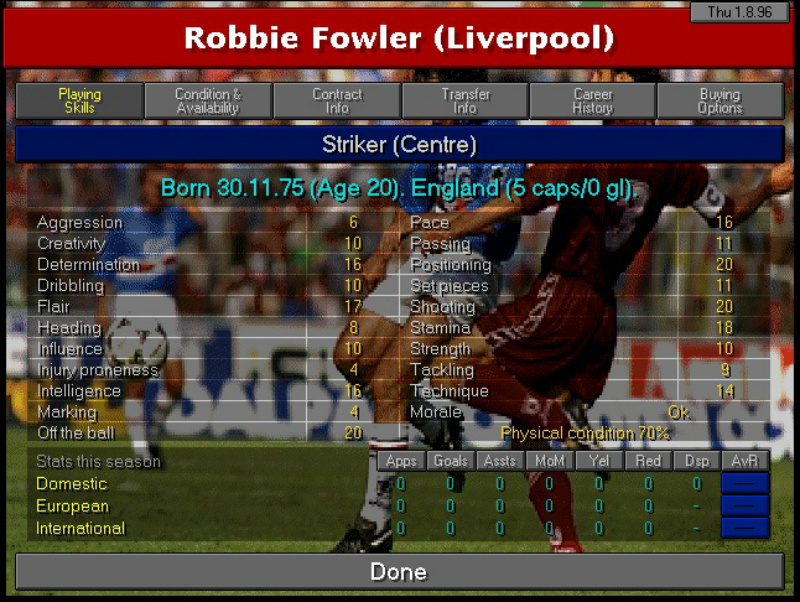 Having ticked all the boxes of a goalscoring pre-prodigy – the all-conquering Sunday league team, at least one double-figure goal haul in one match, scouts lining up with their notepads – the young Evertonian’s exploits continued once Liverpool had finally persuaded him to join their academy. Having been kicked from pillar to post in one match, a 15-year-old Fowler was made to write a letter of apology to Bury’s reserve team manager after rounding the goalkeeper and stopping the ball on the line to kneel down and head it in.

Already well down the Liverpool production line, Fowler’s breakthrough moment in front of a wider audience perhaps came in the summer of 1993 as part of an electric England under-18 side that – on paper and with some romantic hindsight – might have given the dismal seniors a run for their money. On home soil for the European Championship, the early incarnations of Sol Campbell, Gary Neville, Paul Scholes, Nicky Butt and Fowler cruised past France, Holland (including Clarence Seedorf and Patrick Kluivert) and Spain by an aggregate score of 11-2 in the group stage.

Fowler, deployed mainly behind the main striker Julian Joachim, was the tournament’s top scorer with five goals – thanks to a frighteningly accomplished hat-trick against the Spaniards – and England took the title with a narrow win over Turkey in the final.

That summer audition – plus the pressure on Graeme Souness to spruce up the frontline of a fading Liverpool for the Premier League era – meant that Fowler was soon earmarked to take his place neatly between Ian Rush and Michael Owen in the lineage of Anfield strikers who hit the ground running as soon as they were given the chance. Patrick Barclay noted in the Observer before the start of the 1993/94 season that the 18-year-old was “balanced, graceful and lethal in front of goal, and certainly seems to have the equipment”.

Souness would last in the job until January – not that there was much chance of his boot-room successor Roy Evans of abandoning Fowler’s careful but imminent nurturing – but he would give the teenager his first taste of senior football in a League Cup tie away to Fulham. Fowler wasted no time.

Liverpool won the second leg 5-0. Fowler scored all five. A first Premier League goal soon followed, as did his first league hat-trick. By the end of October in the debut season of his professional career, Fowler had scored 10 times in eight games. No-one since Jimmy Greaves had made such a startling impact in the top flight at such a tender age, and no-one – not Owen, not Marcus Rashford – has again.

Fowler finished the season – another collectively mediocre one at Anfield – with 18 goals. Now far more than just a promising fringe option, Fowler was ever-present in 1994/95, and the goals kept coming. Unlike Owen’s early contributions, this wasn’t just youthful energy catching flat-footed old timers off guard: there was a crafty geometry to Fowler’s finishing right from the very start, as he used his burst of pace to earn a chance before looking for the opposite corner to that which the hastily retreating defenders and goalkeeper tried to guard.

His burgeoning reputation as a “natural” finisher was based on more than simply knowing where the goal was – it was his freakish mastery of all the routes to get to it.

Fowler possessed neither blistering pace, a muscular presence nor the sheer height to worry defenders in theory. In practice, he punched above his weight in all of those aspects, plus having the most trusty weaker foot in the business.

3 – Robbie Fowler has scored three perfect hat-tricks in the Premier League, more than any other player. God.https://t.co/9zfQFSOnY4

The numbers – even by 2016 standards, but certainly by those of the mid-1990s – are exceptional. His 100th Liverpool strike came after only 165 games. Fowler was barely 21. A pair of PFA Young Player of the Year awards arrived on the Fowler mantelpiece in 1995 and 1996, as surely would two Golden Boots had it not been for the unstoppable force of Alan Shearer at Blackburn. If not quite as prolific, Fowler’s goalscoring repertoire – inside and outside the box – was just as varied:

It wasn’t just Shearer in the way of Fowler and further recognition. Hitting your goalscoring peak in 1996 meant finding yourself in the midst of an English striker glut that the current national side could only dream of. An England debut against Bulgaria in March 1996 was no knee-jerk reaction to a goalscoring sensation – Fowler had already racked up 80 goals in 135 games before Terry Venables began measuring him up for a place in the squad for Euro ‘96.

When the final 22’s reckoning came, Fowler had edged out Ian Wright, Andy Cole, Stan Collymore and Matt Le Tissier but still had Les Ferdinand for company on the bench as Teddy Sheringham dovetailed with Shearer up front. While certainly more consistent a goalscorer at the time than those further down the pecking order, Fowler’s “natural finisher” tag finally, it seems, worked against him.

“As much as I was recognised more for my goals, I’d like to think I could play outside the box too,” Fowler reflected in 2013. “In fact, I don’t think – I know I could have done. That’s not being big-headed or egotistical. I was confident in what I could do. I could create chances and do things other than score goals.”

Those “other things” were certainly a mixed bag. Fowler briefly dragged into the mainstream the most 1990s football accessory of all – the Breathe Right nasal strip – which claimed to boost airflow by 31%, only to be subsequently debunked by scientists.

A memorable incident at Highbury in 1997 – the most notable act of Premier League sportsmanship until Paolo Di Canio caught a ball instead of scoring past an injured goalkeeper – saw Fowler apparently upended by David Seaman for a penalty, only to protest to referee Gerald Ashby that no contact had been made. Fowler took and missed the penalty, only for Jason McAteer to bury the rebound.

A fax congratulating Fowler on his efforts to “maintain the integrity of the game” arrived from Sepp Blatter, no less. Truly a whole different era. 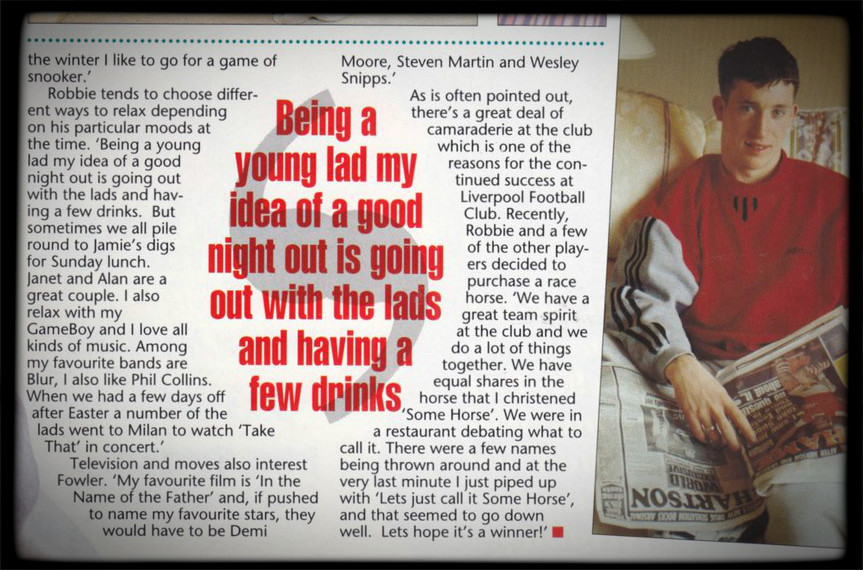 Back in front of goal, Fowler – now one of the leading figures of Liverpool’s “Spice Boys”, characterised by their Loaded magazine interviews, questionable fashion decisions and benevolent defending – continued to flourish in 1996/97, still firmly in his early 20s. The authoritative, ice-cool finishes of his first three seasons were beginning to accommodate the odd flourish – the natural finisher was going supernatural:

“God” he may have been christened by his awe-struck teammates and fans, but Fowler was not immune from the ravages and pitfalls of top-flight football. A serious knee injury in the last minute of a Merseyside derby in February 1998 effectively robbed him of two more years at his astonishing early peak and also ruled him out of the World Cup, where his successor-in-waiting – an 18-year-old Owen – would go on to make a huge impression.

“I had a serious problem and I honestly didn’t think I was going to come back,” he told the Telegraph in 2001. “It’s quite common to damage the anterior cruciate ligament, but I had hurt the posterior ligament. I was only aware of one other player suffering the same thing. It was Julian Dicks, and it finished him.”

A full recovery from knee ligament ruptures is almost taken for granted now but, 18 years ago, it placed a huge question mark over the remainder of a career. Fowler was still only 23 years old, but that collision with Everton’s Thomas Myhre now represents a clear beginning of a gradual end. Before the injury, Fowler had scored at a rate of one goal every 1.67 games; after his return, that diminished to a shade under every three, even without his half-paced retirement tours of Australia and Thailand.

It is testament, then, to Fowler’s outstanding first spell at Anfield that his career is not filed alongside other what-ifs of English football. Yes, he should have played more for England and, yes, he ought to have been a record-breaking one-club man (the sight of him in the shirts of Leeds, Manchester City, Cardiff and Blackburn were more odd than tragic) but his Liverpool legacy as a great goalscorer and a scorer of great goals remains intact and undiluted.

“I mean this in the nicest possible way, but if you look at his physique and his stature he shouldn’t have been the player he was,” his Liverpool teammate Jamie Redknapp told Sky Sports last year. “He wasn’t very tall, wasn’t athletic looking, he had funny little legs, a paunch almost at times, no real strength if you compare him to the modern thoroughbred footballers. But nobody – nobody – could finish like him.”

That F-word again. All things considered, there are perhaps worse things for a goalscorer to be defined by.

For the next instalment of ’90s Heroes, check out the Bet Bright football blog on Friday.