“I still have no idea what I was thinking. It certainly wasn’t pre-meditated, it just happened. I had built up a real head of steam by the time I got there and launched a flying headbutt at him. He needed four stitches in a bad cut above an eye. It wasn’t big or clever.”

The admission of neither bigness or cleverness is a common feature of interviews with Neil Ruddock. And he’s done lots of interviews. Most of them are an imbalanced mix: 90% gleeful anecdotes – in which he somehow still presents himself as both big and clever – and 10% earnest career reflection, where he ponders if his ability could have taken him higher and further. Perhaps he shouldn’t worry too much: for better and worse, Neil Ruddock ticks a few crucial boxes of the 1990s and beyond.

Ruddock’s early trajectory to full-time ruggedness began in the mid-1980s when George Graham converted the teenage winger (!) to centre-back. How his career and physique would have panned out as a wide midfielder remains anyone’s guess, but Ruddock took to his new role with little fear.

By 1989, via a short spell with Tottenham, he had earned a £200,000 move to Southampton where things seemed to be going smoothly – earning England under-21 recognition – before a 60-yard run to plant his forehead on Notts County’s Craig Short gave Ruddock his first story for the after-dinner circuit two decades later. 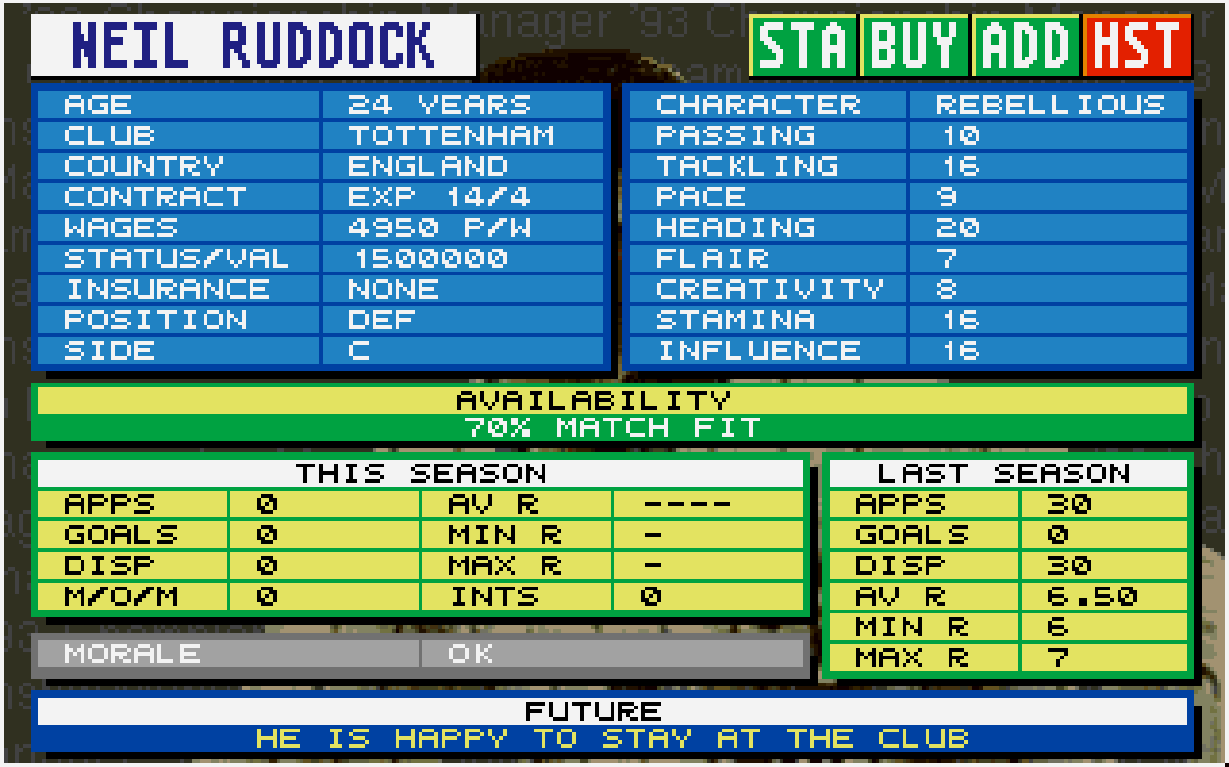 He was also fined and transfer-listed and, despite working his way back into the team, was soon on his way back to Spurs – where he had already adopted his nickname from the undercard of a Frank Bruno fight at White Hart Lane. The original Donovan “Razor” Ruddock was a Canadian heavyweight – this southpaw was coming straight out of Wandsworth.

Ruddock left Spurs under a cloud in 1993 – another common theme of his career – but the £2.5m paid by Liverpool was a show of faith in a defender hitting his prime at a time of Premier League back threes and a growing English obsession with defenders who could bring it out from the back.

And, in fact, he could play. After Liverpool had beaten Chelsea, Nottingham Forest, Blackburn, Newcastle and Rangers to his signature, the Independent had some measured praise for their new defensive rock: “As centre-halves go, they come no tougher. More to the point, and as a growing number of good judges will testify, the English variety come no better.”

Ruddock himself felt compelled to point out his more subtle qualities – “I like to pass the ball and play the Liverpool way. I’m not just big and strong” – but the early signs were not promising. Accounts of the incident during Ronnie Whelan’s Anfield testimonial against Newcastle vary, but Peter Beardsley was left with a cheekbone fractured in three places and considering legal action. Ruddock later wrote in his autobiography that “if anything, the slight rearrangement of his face did Pete a favour.”

Those five years at Liverpool were Ruddock distilled. There were goals: a thunderous free-kick here, a fist-clenching celebration right in the face of Jan Aage Fjortoft, but Ruddock’s speciality was a crashing header, a very specific sub-genre of header that generally occurs late in the game and takes out as many opposition defenders as possible before pummelling the back of the net.

His equaliser against Manchester United in January 1994 satisfied all the criteria, plus earning the prestigious stamp of quality that was an Andy Gray Imaginary Conversation™:

Ruddock had arrived in good time to make a sizeable contribution to the genesis of Liverpool’s infamous Spice Boys – principally as their de facto bouncer – and his personal benchmark was set by punching Robbie Fowler, who had cut up Ruddock’s £300 Gucci shoes on the flight back from a European game.

A rather trickier, more unpredictable adversary was Eric Cantona – who spent most of his comeback game from his kung-fu kick ban having his collar turned down by a grinning Ruddock at Old Trafford – before Andy Cole was sidelined with a double leg-break after a tackle in a reserve game. This counts as another of Ruddock’s “not big, not clever…but it was great!” memories, many of which can be found in their natural habitat of a Talksport video Q&A in a pub:

As if on a one-man mission to gain a place in every online football listicle of the 21st century, Ruddock’s set of specific skills also qualified him for a solitary England cap. A solid showing against Nigeria in a 1994 Wembley friendly wasn’t enough to rise up old pal Terry Venables’ pecking order but, in a parallel universe, it could have been Ruddock stepping up to take the sixth penalty against Germany 18 months later. English football’s loss was probably the after-dinner circuit’s gain.

By 1998, a 30-year-old Ruddock wasn’t quite what Liverpool were all about. “[Gerard] Houllier came into the dressing room and he went to Fowler, ‘Ahh, Robbie Fowler,’ went to David James: ‘hello, David’, he comes to me and said: ‘I’m sorry, what is your name?’ I said: ‘Have you been in a coma for 15 years?’ Everyone laughed. He didn’t get my sense of humour. I think it was about a week later I was gone.”

That took him to West Ham, where his hobbies included winding up Patrick Vieira and nearly separating Harry Kewell’s upper and lower body:

We were ready for the next chronicle of Ruddock.

England one-cap wonder, hatchet man: Ruddock was now just one novelty away from a left foot/right foot/header of timeproof football #content. Without quite enough hair left to attempt a Dodgy Barnet, Ruddock still had one more caricature up his sleeve. By the turn of the millennium, his top-flight career was over, but Ruddock was intent on squeezing another couple of years out of his creaking knees and expanding waistline.

In a story that has become semi-dissolved in the gravy of a thousand An Evening with Razor dinners, our protagonist rocked up for a reunion with former Liverpool manager Roy Evans at third-tier Swindon Town – reportedly on a £5,000-a-week contract but without a pair of shorts big enough to fit the Considerable Arse of Neil Ruddock.

“Ruddock, 33, had a special pair of shorts flown in from Egypt to fit his expanding frame”, is a fine collection of words from the Telegraph’s report of his Swindon debut in 2001:

A blistering 20-yard free-kick was the ideal start to his lower-league twilight years, “but his influence,” the Telegraph continued, “was far wider than both his shorts and his goal, which elicited a celebration akin to a gorilla’s mating ritual.”

Presumably cleaned out by the shipping costs of size XXXXL shorts, Swindon were soon trying to get him off the payroll, and Ruddock’s playing career was about to come full circle. Ten years after that headbutt on Craig Short, the final cut of the Razor would also come against Notts County, as a defenceless and bewildered-looking Darren Caskey was thrown to the floor. Ruddock marched off the pitch and into his third act.

“After all the years I’ve been coming into a football ground sharing a lot of laughs and banter with 30 or 40 lads, I can’t see me staying at home with the old lady and going shopping at Lakeside every day. There’s just no comparison.”

At this point, you are encouraged to Google “Neil Ruddock” and filter it to videos only. The sheer volume of YouTube banter that surfaces raises two immediate questions: 1) has anyone better nailed the art of being a Professional Retired Footballer like Ruddock? and 2) why hasn’t Neil Ruddock released a football bloopers DVD?

A footballer’s transition to become a TV personality doesn’t always work – for every John Fashanu on Gladiators there’s a Wayne Bridge in the jungle – but Ruddock has located his niche and gone in two-footed. In summary: he’s slightly too risque for Match of the Day 2 and not quite telegenic enough for the cinema screen, but Ruddock but could do a job for you on Soccer AM if his hangover isn’t too bad:

His IMDB page is a showbiz consolation for a meandering journeyman football career that might have been: The Big Breakfast, I’m A Celebrity, Bo’ Selecta!, This Morning (three appearances, no goals), A Question of Sport, Celebrity Stars in Their Eyes (as Neil Diamond), Wife Swap, The Jeremy Kyle Show, Celebrity Big Brother (“as Razor”) and – most gloriously – Come Dine With Me: Footballers Special, alongside Fashanu, Carlton Palmer and Frank Worthington.

Elsewhere, mobile anecdote factory Ruddock is available to take the mic at your event – his agency bill him as “the youngest and probably the best after dinner speaker around”, a claim conveniently impossible to ratify – during which you may, if you’re particularly unlucky, be treated to a problematic impersonation of Harry Redknapp.

It's that time again @MrsRazorRuddock Milky coffee please I'm in the den Watching football. I promise I'll ruin you later ??

Before we cast judgement, then, on whether the big man really did fulfil the potential George Graham saw in him 20 years ago, consider this: you could, once upon a time, purchase a clip of Neil “Razor” Ruddock singing popular football chants to use as your ringtone.

I still wonder where those giant shorts are now.

For the latest instalment of ’90s Heroes check out the Bet Bright football blog.