“They’ve certainly come a long way since my younger days. Large people always say they can’t get decent stuff. Well that’s no longer true – tall or small or big, there’s something in there for everyone.”

The subjects of the previous twenty instalments of this 90s Heroes series have all, more or less, had one thing in common: stardom. But there’s something that top-flight notoriety, £42,000-a-week wages and your very own Goals on Sunday montage could never buy, and that is a 15% discount at the Stockport branch of High & Mighty.

Ormondroyd, Leaburn, Crouch: there has always just about been elbow room for the beanpole striker in English football, unless they couldn’t get a work permit:

Premier League Legends That Could Have Been, Pt 1 of 1:
Yang Changpeng pic.twitter.com/hq74QLttDg

The qualifying height to be classified as a beanpole has, for some reason, never been formally established. 6ft 3in ought to do it, but not if you happen to be well upholstered at the same time. Proportion is king: Alec Stock (the pragmatic former manager of both Yeovil and Roma either side of the war) once said the best strikers “all have their arses near the ground”. That’s fine if you’re Gerd Muller but – for the beanpoles – coordination and balance become your enemy.

With that in mind, it makes sense to delve below the top flight in search of our ultimate beanpole of the 1990s, a time when patient approach play was an optional extra. Rather than impressing Alan Hansen on Match of the Day, it was about earning a mention from Gabriel Clarke at an ungodly hour on Football League Extra and hoping that enough people had set their VideoPlus+ to witness your goalscoring exploits.

Trouble was, there tended to be quite a few prolific plunderers around, 30-goal-a-season men auditioning for a step up that might never come. How could one stand out from that crowd? By being Kevin Francis. 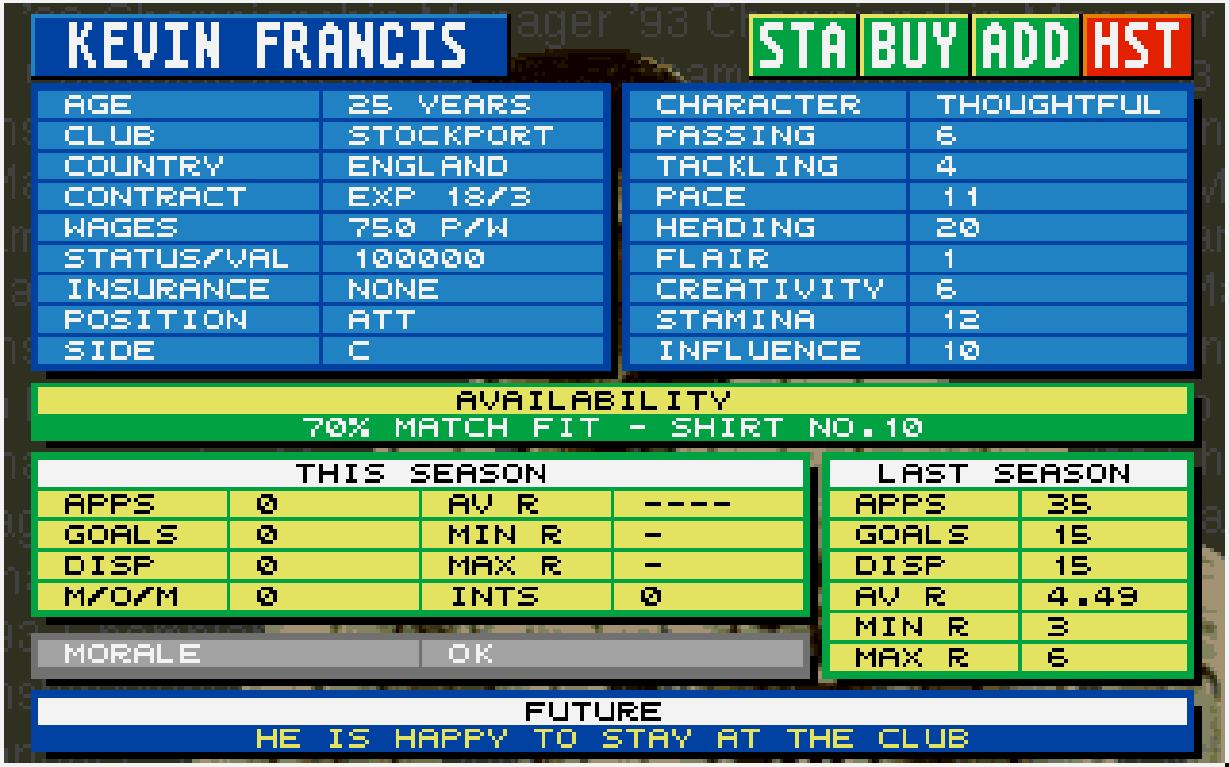 Francis’ top-flight opportunity was early, but brief. Having been plucked from the non-league obscurity of the aptly-named Mile Oak Rovers, Francis might have harboured hopes of forming a little-and-large partnership with Dean Saunders. A scrambled FA Cup consolation against Port Vale was all he had to show for it, though, and Stockport County shelled out £45,000 to bring him in just in time to clinch promotion from the Fourth Division. That was over £500 an inch, but would prove to be an indisputable bargain.

If you have a spare quarter-of-an-hour (or even just a quarter-of-an-hour left to live) you might wish to consider filling it with part 1 and part 2 of the cryptically-titled Kevin Francis…… 100 Goals. There is no soundtrack, except one charmingly Greater Manchester rendition of “Always Look on the Bright Side of Life” from the stands at Edgeley Park and the frankly wonderful commentary of lifelong County fan Richard Barnwell. It’s life-affirming stuff:

I just want to be at least 50% as happy as the local commentators when Kevin Francis used to score for Stockport pic.twitter.com/MPfCEv38iO

Setting aside the prolific use of “IT’S THERE!” – a commentary device that seems to have died a quiet death in recent years, but which greets no fewer than 39 of the century of goals here – Barnwell’s fond preoccupation with the striker’s gargantuan dimensions is the common theme. Precisely 25% of Francis’s output is attributed to “THE BIG MAN”, “THE BIG FELLA” or “BIG KEVIN”, who invariably has “DONE IT AGAIN!”.

For all his emphatic verticality – Kevin Francis is six foot seven inches tall, let’s remember again – there is an impressive range of goals here, all celebrated by the commentator with the deadpan impartiality of a man who has just completed a 32-game accumulator. Precisely half of them come with his head, of course, usually after the ball is hung up to the back post to terrorise a full-back from Plymouth or Brentford, but he saved something rather special for his 100th. The Independent’s rather unimpressed Jon Culley was there to witness it:

‘The towering presence of the 6ft 7in Francis simplifies Stockport’s tactical approach but it is mightily effective, if not particularly uplifting. Francis opened his account with his 100th goal for the club in the 39th minute from a throw-in move that was clearly well rehearsed, even if the end result was perhaps more spectacular than intended. Mike Flynn hurled the ball to the near-post from the right touchline, Andy Preece flicked it on with his head and Francis found the net with an adroit overhead kick.’

Acrobatics from the big man. We were heading into the realms of fantasy – and, indeed, the unmissable sight of Francis was even making it into the odd magazine advert for play-by-mail fantasy football. 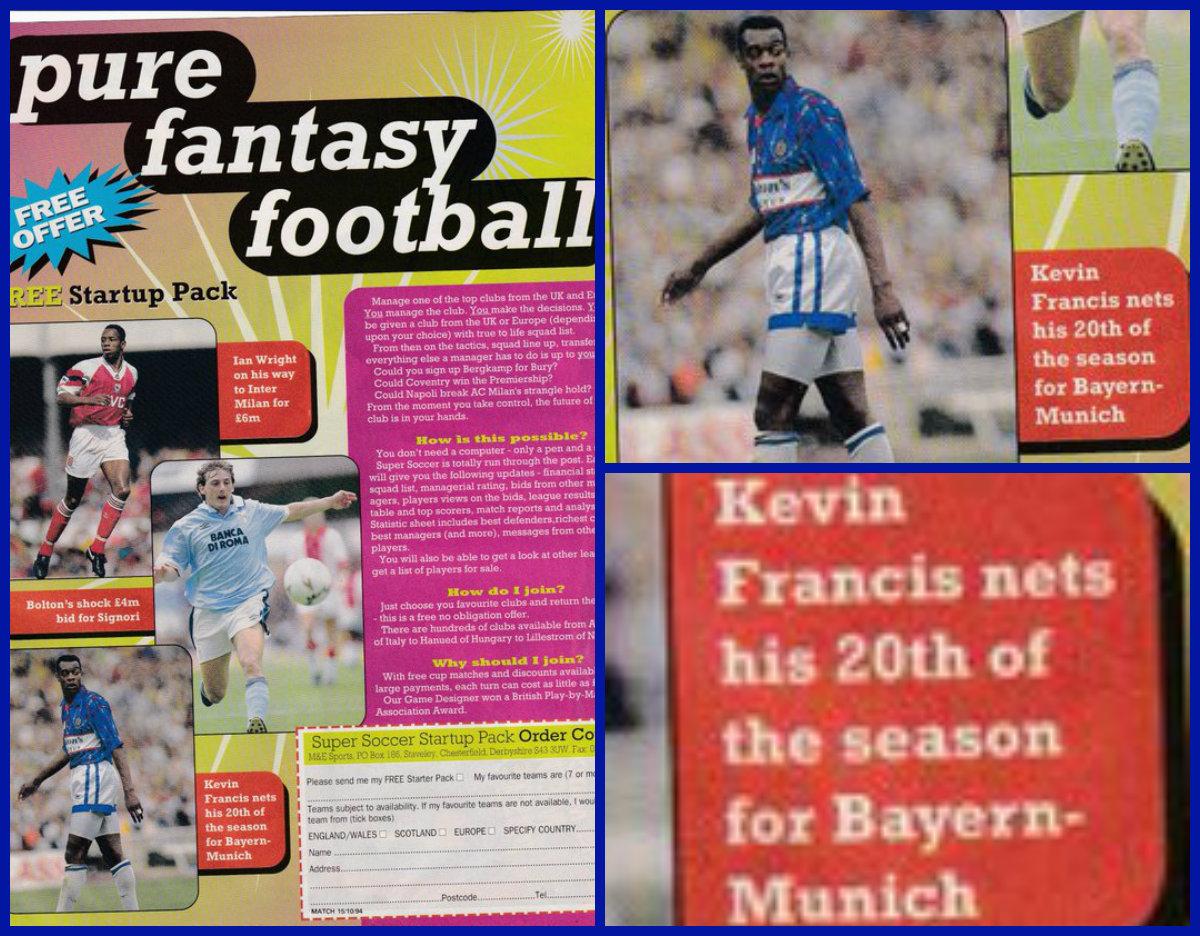 ‘By the end, it was difficult to discern which of the two powerful No. 9s on view, Les Ferdinand and Kevin Francis, was the England international’ – Henry Winter, January 1994.

The visit of Queens Park Rangers to Stockport on a cold FA Cup third-round afternoon was the perfect opportunity for Francis to move further into the mainstream. Strike partner Andy Preece scored a superb late winner, but the giantkilling was set in motion by the giant himself, bringing a lofted ball down in some style before firing home.

QPR’s Ray Wilkins tried to put a brave face on the upset – “If I need any guttering done, I’ll give Francis a call” – but not everyone appreciated the big man’s talents. Paddy Crerand took to the Greater Manchester radio airwaves to label Stockport’s cult hero as “crap”, which led to the phone lines going into meltdown and the station’s head of sport having to write letters of apology to the outraged supporters. “Goal-scoring is about being in the right place at the right time, skill and strength,” one fan told a local paper afterwards. “Kevin has all of these. Paddy, he will ram your pathetic, ignorant comment right back down your throat.”

The polarised opinions kept coming. “One wing-to-wing pass in the play-off semi-final against York was worthy of Hoddle”, wrote another Independent match report, but opposition fans were rather less effusive.

“Kev is unique,” responded Stockport’s manager Danny Bergara, “and he’ll get criticised from now until doomsday. Everywhere we go he gets called a donkey but, if that’s the case, he’s the most valuable donkey in the world. When I signed him I told him I hadn’t bought another Pele. What I did tell him was to go out and be his own man.”

That strategy was a wise one, and ultimately reaped the rewards of 117 goals in 193 games in a little over four seasons with County – including 39 alone in 1992/93 –  but even Francis couldn’t drag them out of the third tier. Reaching the finals of the playoffs and the Autoglass Trophy, they visited Wembley four times in two years, and lost each one.

With Francis soaring, but Stockport inert, bigger clubs put out their feelers. Leeds monitored his progress, while Wimbledon weighed him up as a replacement for John Fashanu. Nothing materialised, however, until Barry Fry and Birmingham City stepped in with 800,000 reasons for Stockport to take notice, and the 27-year-old Francis was on his way to his hometown club.

A fractured ankle had delayed the transfer, but Francis would still end the season with another 22 goals and his sideways move became an upwards one when Birmingham were promoted as Division Two champions.

Now there’s a headline. Another wintery cup tie, and another beanpole-inspired upset. The 5ft 5in Juninho was just seven games deep into his English football education when he rocked up at St Andrews with such complementary talents as Phil Stamp and Jamie Pollock for a Coca-Cola Cup fourth-round replay.

Within 18 minutes, the tie was over, Juninho had shared a football pitch with Kevin Francis and somehow come off worse. Who else could the big man knock off their perch? Leeds United and Tony Yeboah lay in wait in the semi-finals and, briefly, Francis seemed to have spearheaded yet another turn-up for the books:

“The 6ft 7 in striker let fly Yeboah-style from the D,” wrote the Independent, “the ball tearing into the net off the inside of a post…and when Yeboah put the rebound against the bar when facing an open goal, it seemed to confirm that he and Francis had swapped identities.”

By 1997/98, when the second tier was treated to the deluxe goalscoring exploits of Pierre van Hooijdonk and Kevin Phillips, Francis was on the wander again – this time to Oxford, who were holding their own in mid-table. 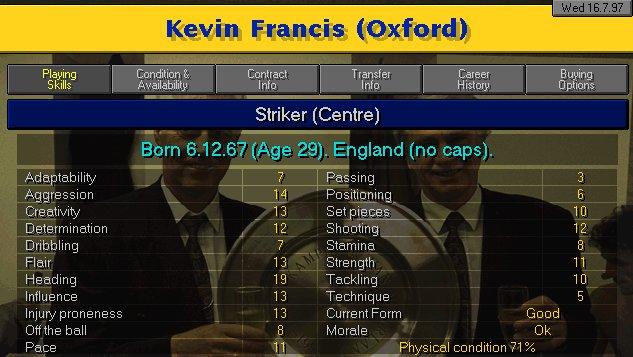 Seven goals in 11 games after arriving in January suggested he was still capable of ruffling more elite feathers and, after all that lower-league toil, he was finally rewarded with an international call-up. Not from Glenn Hoddle, though, but for St Kitts & Nevis.

“I’d never been to the place but got selected for the Shell Caribbean Cup,” Francis later reflected. “I’m surprised because I thought I’d have got the call from the England manager.”

At the start of the 1998/99 season, a succession of knee operations would halt that momentum. Perhaps the gymnastic goal celebrations hadn’t been a wise move:

Francis clambered off the treatment table just in time for one last crack at a Premier League upset: the visit of Gianluca Vialli and Chelsea for an FA Cup fourth-round tie in January 1999. Dean Windass had nodded Oxford in front shortly after half-time to send the Manor Ground into ecstasy and, cometh the hour, cometh the big man to turn the screw.

As an increasingly desperate Chelsea poured forward, Francis loitered patiently up front. When his moment came, the rustiness was overwhelming, and “so awkwardly did he react to the best chance which came to his feet that he looked like a tossed caber”, reported the Guardian’s David Lacey.

And it is a magnificent miss. Limbs, to use the modern parlance, were decidedly AOTS as Francis goes down like a 100/1 outsider in the Grand National, with David Pleat offering only a “well, well, well” in the way of co-commentary analysis and Marcel Desailly visibly wondering how his mighty career had led him here.

Still, Oxford could rely on the other handy function of the beanpole striker: Helping Out at the Back. Into injury time, and Chelsea floated in a hopeful corner. And there he was, the big man, nodding the ball clear of dange…ah, hang on:

The ball was won but so too was Vialli’s ankle, chopped down by a size 14 boot, and Chelsea had an FA Cup lifeline. Referee Mike Reed waved away the Oxford protests, Frank Leboeuf stroked home the penalty, and Francis struck an ominous post-match note: “No doubt I’ll catch up with Mr Reed in Birmingham, as I still live there, and we’ll see what happens if I do.”

That remained Francis’ most memorable contribution in a yellow shirt and in 2000, five years after leaving to seek his fortune, the big man returned to Edgeley Park. He wouldn’t add to his 117 goals, but the fond memories certainly weren’t tainted.

“I’ve got wonderful memories of Stockport and the supporters. It was the biggest stage of my life as a person and as a footballer,” says County’s Player of the Century. Finally retiring in 2005 after returning to his non-league roots, Francis upped sticks for Canada, where he became a long-distance truck driver and then became a Calgary police officer.

They might not be too familiar with his legendary Stockport status over there, but – for a few years in the mid-1990s – Big Kevin Francis was the height of unsophistication.