“Ajax are not just the team of the Nineties, they are approaching football Utopia. Their concept of the game is exquisite yet they have a physical superiority as well. They are Beauty and the Beast” – Real Madrid coach Jorge Valdano, 1995.

You don’t have to search far and wide to find awe-struck eulogies to Ajax ‘95, a team inextricably associated with a year to the point where the two must be used together at all times, like Brazil 1970, Holland ‘74 and Derby 2007-08. Personally, rather than the contemporary soundbites such as Valdano’s – after Ajax had smashed-and-grabbed at the Bernabeu like ninjas in September of that year – there is more glory to be found in Wikipedia’s surgical accuracy:

“During the 1994–95 Dutch football season, AFC Ajax competed in the Eredivisie. Ajax won a league-cup double. They won their 25th Dutch title in style, not losing a single match all season and scoring 106 goals. Ajax also won their fourth European Cup, defeating A.C. Milan 1-0 in the final. This Ajax squad is considered to be one of the best teams in football history.”

Back in those halcyon days when the idea of having to talk about the BMI of The Sun’s Neil Custis was a mere glint in Louis van Gaal’s eye, his Ajax side were eviscerating domestic and continental opposition in gleefully emphatic fashion. Above all their more high-stakes moments – turning Bayern Munich into dust in the Champions League semi-final second leg, or Patrick Kluivert stabbing home the winner in the final against Milan – is a formation-defying goal against MVV Maastricht that best sums up the collective geometry of Ajax ‘95.

It starts with Edwin van der Sar’s nerveless acid jazz version of Manuel Neuer and ends with sweeper Danny Blind charging upfield and taking his broom with him, but there are plenty of technically perfect cameos in between that all add up to one of the most satisfying squad lists in modern football history. 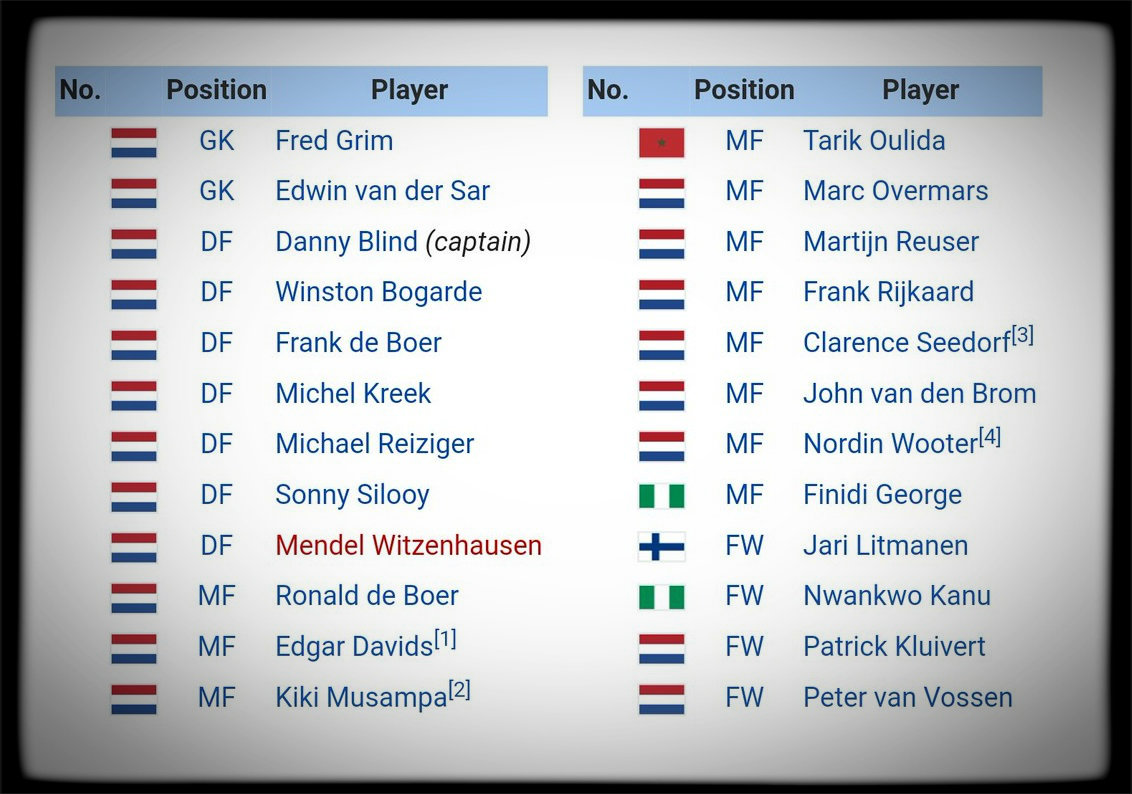 In between the homegrown (or efficiently recruited) stars-to-be – Van Der Sar, Davids, Kluivert et al – there are some less-vaunted names making up the numbers. Nordin Wooter rocked up at Watford a few years later, Martin Reuser would have risen higher than Ipswich’s promotion side of 2000 but for injuries, and Mendel Witzenhausen may still be wondering when his Wikipedia page is being set up. Meanwhile, the abiding memory of Peter van Vossen at Rangers is this exquisite miss. Against Celtic. At Celtic Park.

But let’s focus on the main surgical team for the live dissection of MVV, who would go on to be relegated at the end of the season, starting with another future Ipswich legend.

A Nigerian winger with the most genuine of genuine pace, who arrived at Ajax in tandem with the thinking man’s beanpole Nwankwo Kanu in 1993. Finidi George – you can’t help but type and say the name in full, because it’s lovely, even though he had shed the George by the end of the decade – played in both of Ajax’s Champions League finals in 1995 and 1996, helping propel them to the first of those with this most extreme example of the outside-of-the-boot screamer against Bayern.

His role in this goal is simple enough: picking up the scraps from an MVV set-piece, Cruyffing away from the opposition no.10, and laying the ball off to…

When the Ajax team was inevitably broken up and cashed in after the defeat to Juventus in 1996, right-back Reiziger was earmarked by Milan to help build their next great side. Unfortunately for him – and Edgar Davids, who also took advantage of the new Bosman ruling – post-Capello Milan were a disaster, plummeting from the Serie A title to 11th. Reiziger, whose name roughly translates to “voyager”, was on his way again – rejoining Van Gaal and a hefty Dutch contingent at Barcelona.

For such a quick and technically sound full-back, goals were never Reiziger’s thing: one for Ajax, none for Barcelona and then – presumably years in the making – this for Middlesbrough in 2004:

Appropriately, then, his job within this masterpiece is a functional one: holding off some energetic MVV pressing with almost embarrassing ease, while swapping passes with… 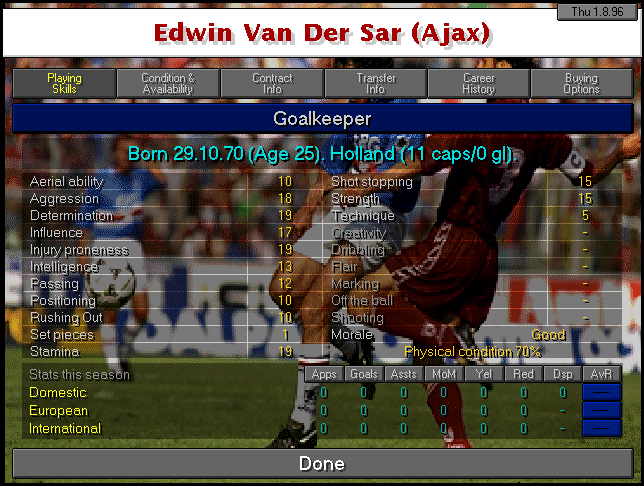 A goalkeeping titan for both club and country, despite looking like a badly miscast Nicholas Lyndhurst.

After their Champions League zenith, and while many of the younger names left to seek their fortune in Italy and Spain, Van der Sar lingered with Ajax until 1999. Two seasons with Juventus – brought to a halt by the arrival of Gianluigi Buffon for a preposterous-looking £32.5m – were followed by a pleasant four years with Fulham, and then a return to the big stage with Manchester United. Van der Sar’s zen-like take on the Good Feet for a Big Man concept extended to the holy grail towards the end of his Ajax career: the spectacle of a goalkeeper scoring a penalty. 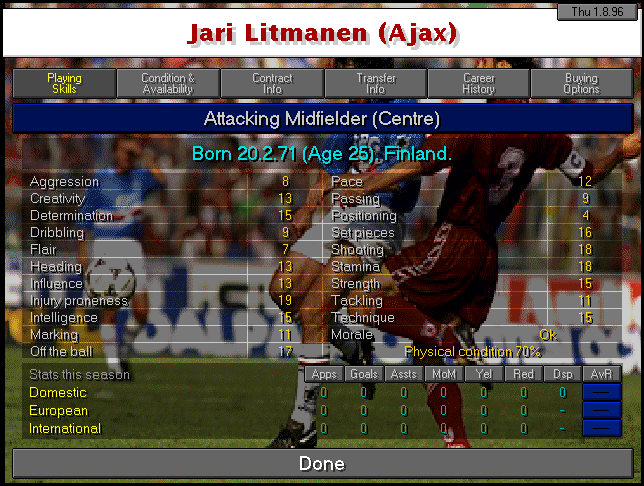 Jari Litmanen’s footballing legacy can be found in many forms: the most enjoyable in YouTube video, and the most curious in Benelux birth certificates.

Van Gaal gave Litmanen the No.10 shirt when Dennis Bergkamp took his considerable repertoire to Inter in 1993. Litmanen responded with 85 goals in the following three seasons – including 19 in 26 European matches. His array of goals is quite something, but this one is particularly ridiculous:

Against MVV, all we see are two touches – an instant control and a deft flick inside to… 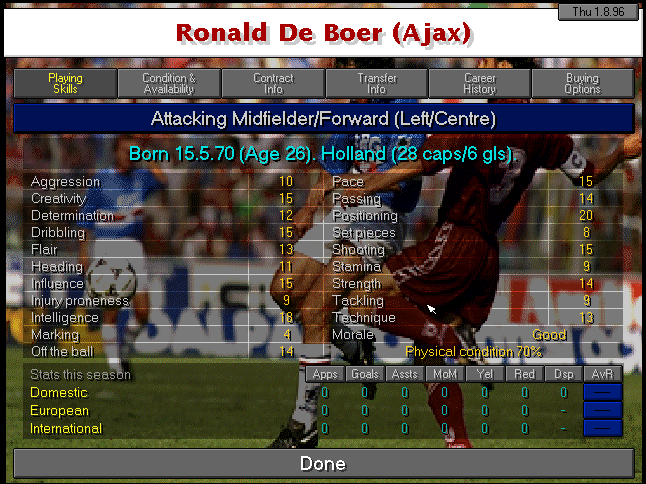 The older of the De Boer twins by a matter of a few minutes, Ronald was arguably outshone by Frank purely by virtue of his own versatility. While his brother won 112 caps as a set-piece expert and ball-playing defender, Ronald faced sterner competition at both domestic and international level as an attacking midfielder.

Arsenal were rumoured to be lining up an £18m for the pair in 1997, before Barcelona took the package deal two years later. There would, however, be no repeat in Spain of Ronald’s Eredivisie impudence:

Against MVV, De Boer skips past a flying red shirt before sliding the ball into the feet of…

For all his squat ferocity, though, Davids still possessed his fair share of Ajaxian pace and finesse. He was the beauty and the beast that the awe-struck Valdano had described in 1995.​

Two touches inside, leaving the MVV No.6 sliding into oblivion, and Davids slips the ball forward for the marauding figure of… 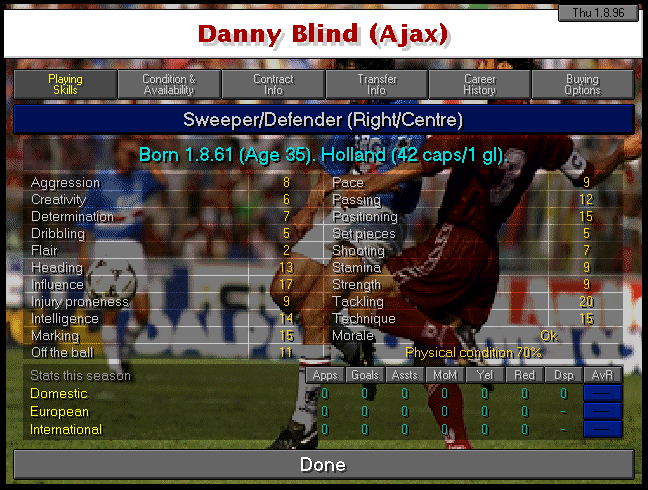 The unquestionable on-pitch leader of Ajax’s 1995 collection. His slightly grizzled appearance and relative lack of height for a centre-half – barely 5ft 9 in his studs – gave the general impression of a Dutch supermarket own-brand Franco Baresi. Like the Italian, Blind’s sheer class on the ball allowed for frequent departure of his defensive station, to rather elegant effect:

Blind charges through, with only one solitary MVV defender left, taking two touches from the halfway line to the penalty area. The shot is on, just about, but that isn’t the cherry on the icing of the cake he’s looking for. Without looking up even once, he slides the ball left to the only player with the leg-speed to keep up with him… 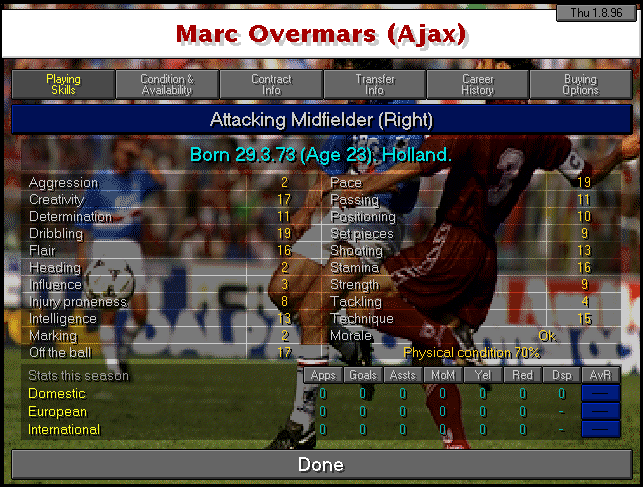 Injuries may have repeatedly halted the momentum of Marc Overmars at Ajax, Arsenal and Barcelona, which makes his trademark burst of acceleration all the more remarkable. A classic winger, and one happy on either flank, Overmars’ business was about hitting the byline, and giving the opposition full-back as torrid a time as possible in the process. Elsewhere, his explosive bursts of pace were a consistently useful outlet:

Against MVV, having raced 50 yards to join in the fun, Overmars still has the task of lifting the ball over the goalkeeper to complete the puzzle:

And, there, on the touchline – with a round of applause as much for himself as the players who put the goal together – is Van Gaal.