Plenty are happy to try and forget England’s half-decade between the jolts of footballing pride at Italia ‘90 and Euro ‘96, when the late Graham Taylor found his Impossible Job made even harder by the ultimate transitional phase. Gary Lineker, out for 48, trudged away from the international scene before the real ignominy kicked in, while Alan Shearer and a rejuvenated Paul Gascoigne wouldn’t become truly potent in an England shirt until football came home.

One bridge over the void between those near-glory days, a beacon of hope among the Ripleys and the Sintons, was David Platt. Long before he was relegated to the third most famous David Platt in the world – behind the Coronation Street manchild and the American megachurch pastor – “Platty” was a rock-solid, all-action midfield gem who guaranteed you 8/10, even if kids were still unlikely to assume his identity in their playground kickabouts.

Despite having an international strike-rate that rivals Wayne Rooney and Michael Owen and comfortably outstrips that of Kevin Keegan and Frank Lampard, plus membership of a painfully exclusive club of English players who settled and flourished abroad, Platt is something of an afterthought in the debate over modern England greats.

Platt began his journey as a Manchester United youngster but, like Peter Beardsley before him, it’s hard to picture him in their red shirt. Fourth Division Crewe was the stage on which his midfield goalscoring prowess would first show itself and, within two years of a £200,000 move to Aston Villa, had picked up the PFA Player of the Year award for his 20-goal haul in 1989/90.

Another prolific season followed in 1990/91, along with a dutiful stint between the sticks at Highbury when Nigel Spink had been stretchered off…

…but, in between those reputation-confirming years, Platt was already bringing his perfectly-timed penalty-area runs and tidy finishing to the international stage. And they don’t come more perfectly-timed and tidier than the 119th minute of a World Cup knockout stage.

“I had an eye for getting on the end of that sort of ball and the technical ability to finish those chances off. I worked hard on practising overhead kicks and volleys in training at Aston Villa but, even so, if I had re-enacted that chance against Belgium 10 times in training the next day there’s a very good chance I wouldn’t have scored once from it. It was just one of life’s rare, perfect moments.”

While England succumbed to their Italia ‘90 fate, Platt bucked the trend for losing nerve at the crucial moment – scoring in the shootouts against both Cameroon and Germany and leaving the hosts with something to remember him by in the third-place playoff.

But Serie A had already sat up and taken notice. The following summer, a British record fee £5.5m took him from Villa to newly-promoted Bari – the scene of his goal against Italy – for some immediate tests of his ice-cool composure. Gazzetta dello Sport was on his back straight away, christening him “Plaff” after a pre-season penalty miss, before running a news story on Platt’s first four trips to Bari restaurants, including a full rundown of what he had ordered. “I want to be an Italian,” he responded. “To speak Italian, live like an Italian, eat like an Italian.”

“The secret to success in Italy,” he insisted, “is to submerge yourself in the new reality.”

The reward for that commitment was the No.10 shirt, the captain’s armband and 11 goals from midfield in his debut Serie A season – two fewer than Gabriel Batistuta, one fewer than Gianfranco Zola and level with Gianluca Vialli. This was rather different company for Platt in the goalscoring charts to Roy Wegerle, John Fashanu and Dean Saunders back in the First Division.

Despite Platt’s efforts, Bari were relegated and a contract clause was triggered allowing him to leave to the highest bidder. While Sampdoria’s Roberto Mancini went on a charm offensive, Platt was snapped by Juventus for £6.5m, and tabs were starting to be kept on that most modern of footballing measurements: his cumulative transfer fee. Indeed, even when he retired in 1998, he was still the second most expensive player of all time behind Ronaldo in aggregate terms.

In Turin, though, Platt’s momentum and fortune stalled. Fitness prevented him from nailing down a midfield place among Dino Baggio, Antonio Conte and Andreas Moller as Juve won the UEFA Cup and Sampdoria came calling again, but not before being reminded of Platt’s right-place-right-time knack.

The fee was £5.2m, representing Platt’s steel-plated reputation despite relegation at Bari and an injury-hit season at Juventus. Even in 1993, when Serie A could have staked a reasonable claim to boast the strongest league Europe has even seen, Sampdoria stood out as something of a glamour destination, particularly on the CV of an Englishman. 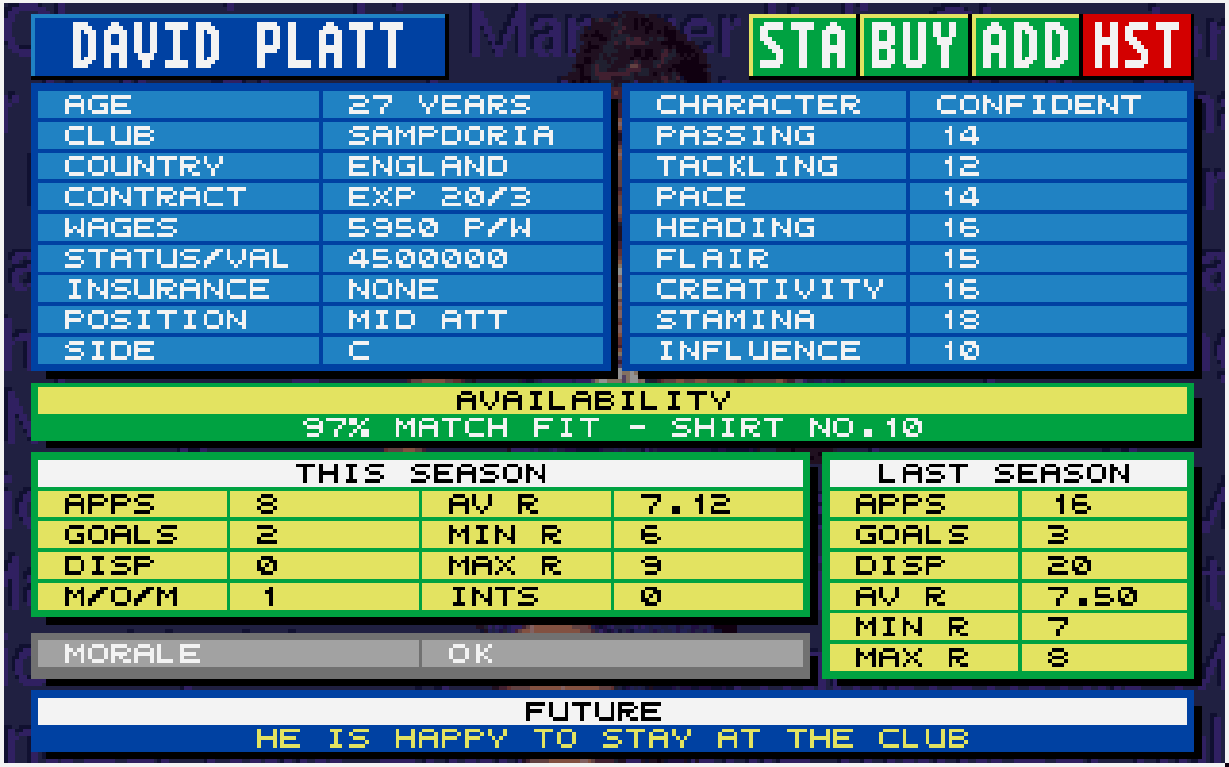 Once again, Platt found himself surrounded by stellar talent – Pagliuca, Vierchowod, Jugovic, Lombardo, his new mate Mancini…and Ruud Gullit. Throw in one of the finest kit designs in living memory, and Platt pretty much had it all.

Inevitably, he scored on his Serie A debut – just as he had done for Bari and Juve – and six goals in his first 12 games strongly suggested he had finally settled into his Italian groove. Under Sven-Goran Eriksson, Sampdoria finished third in the league and, thanks to another stunning volley for the Platt scrapbook in the semi-final against Parma, lifted the Coppa Italia.

In an England shirt, Platt was still bounding around, chest out, scoring goals, even as qualification for USA ‘94 slipped hopelessly away. The mortal blows struck by Ronald Koeman at either end of the pitch in Rotterdam robbed Platt of a second World Cup to add to his promising Italia ‘90 displays.

Long before he looked like an egg with Michael Keaton’s face painted on it, Platt was comfortably the most impressive English footballer on the Continent – so absurdly well-tanned and impossibly relaxed in his new surroundings that he could have passed for a native but for the deep Lancashire accent that weighed down on his otherwise free-flowing Italian.

Platt would later return to Sampdoria as “manager” – even if they had to circumvent the rules to accommodate his lack of qualifications – and Gazzetta dello Sport gave its ultimate seal of approval: “Platt, in the end, has the attraction of the exotic. He knows Genoa like his own pocket, he speaks Italian like a Florentine…and, what’s more, he knows his football.”

…before it was time to take everything Platt had soaked up in Serie A back to a new-look English top flight.

In the summer of 1995, Bruce Rioch and Arsenal took football’s total spending on the premium services of David Platt beyond the £22m mark. A visit to Platt’s Sardinian holiday home from vice-chairman David Dein was enough to fend off interest from Blackburn and Tottenham (who, in hindsight, both seem very Platt-ish destinations indeed) and Manchester United, who wanted to claw back a talent they had let slip down the divisions a decade earlier.

“I’ve signed for Arsenal because I think I can play a key role in this club winning the title again,” Platt declared. “This will happen within two or three seasons at the most.”

Platt was half-right: Arsenal would lift the title in the last of this three seasons at Highbury, but by then Rioch had been replaced by Arsene Wenger, who got busy installing a dynamic new midfield heart of Patrick Vieira and Emmanuel Petit. Platt’s contributions were fleeting, yet still as immaculate as ever.

At international level, Platt bowed out with another coulda-woulda-shoulda moment with England at a major tournament – although he, at least, had the sense to get his fast food advert out of the way before Euro ‘96 had begun.

Platt’s last kick of an international ball was his trademark, undisguised but emphatic sidefooted penalty – a decidedly un-English retention of bottle from 12 yards from a man whose confidence in his various abilities rarely dimmed.

There isn’t a great deal of competition to be England’s finest modern footballing export, but that doesn’t detract from Platt’s seamless adaptation to a vastly different football culture. Chris Waddle may have shone brighter at times in Marseille, and Paul Gascoigne may have arrived with greater fanfare in Serie A, but Platty operated with the minimum of fuss – and kept England afloat in the wilderness years in the process.

In the satisfying sub-genre of goalscoring English midfielders, we become preoccupied with Frank Lampard and Steven Gerrard. David Platt had been there, crashed his way into the penalty area, done that and worn the armband well before the Golden Generation rather unfairly began to bury his footballing memory.