How did the Premier League become so overhyped, overblown and overdramatic?

The answer is simply that it’s had a lot of practice. 25 years ago, though, Sky Sports needed to make an immediate impact with their brave new world of football broadcasting. What they came up with through the 1990s was a far cry from the cinematic polish of today. But that doesn’t mean it wasn’t far more enjoyable…

In the summer of Year Zero for what we occasionally sneer at as Modern Football, Sky declared it was a “whole new ball game”, stating their intent with this extended promotional video. It is, by definition, seven minutes and twelve seconds of boasting:

What did they promise us? Firstly, they proudly blathered on about some serious technology – including flashing buttons and those slidey things that controlled the “F/X”: 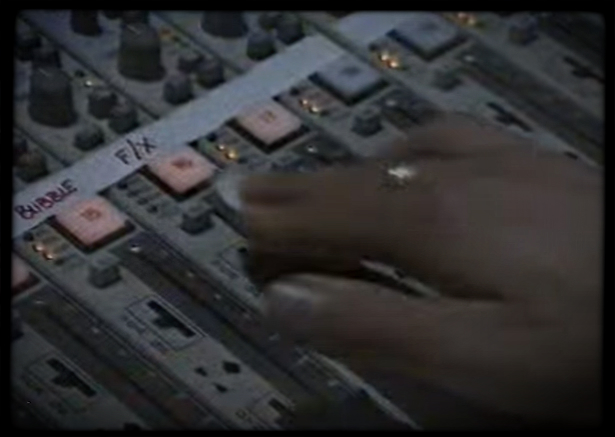 With no expense spared, BSKyB had captured the rights to all the top European competitions like the Zenith Data Systems Cup. A moment too, please, to admire the Rangers kit of 1992/93: 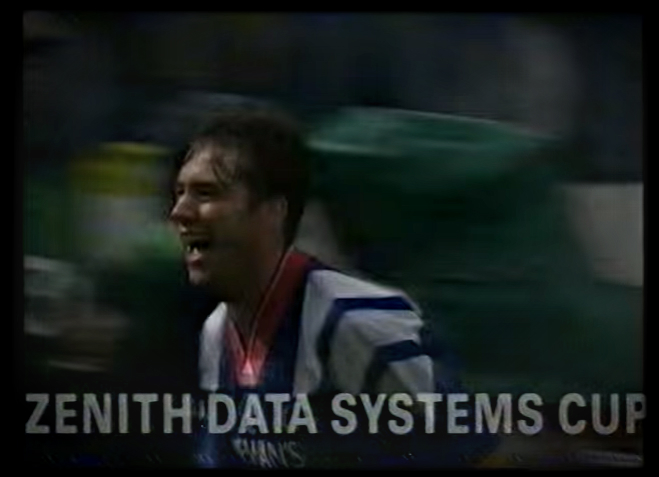 They amassed a team of pundits quicker than they could build tables to accommodate them. A young Richard Keys holds court here on “Sky Soccer”, in those innocent early days before the “dark forces” moved in, while poor David Pleat is nudged to the periphery. 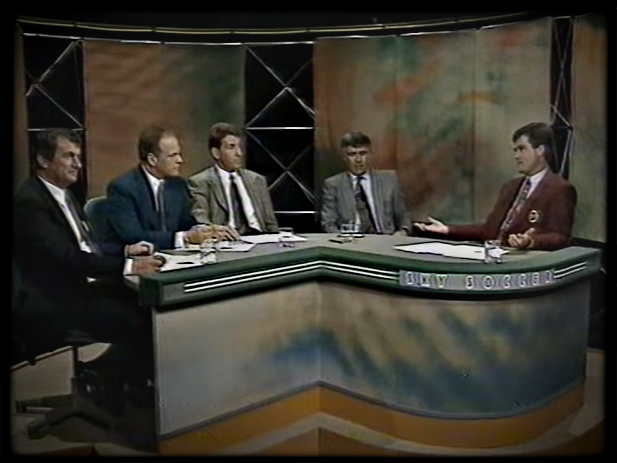 They blinded us with even more technology. A computer! In the dark! Which, in fact, turned out to be a pretty accurate prediction of how the youth of 2016 would consume their Premier League football. 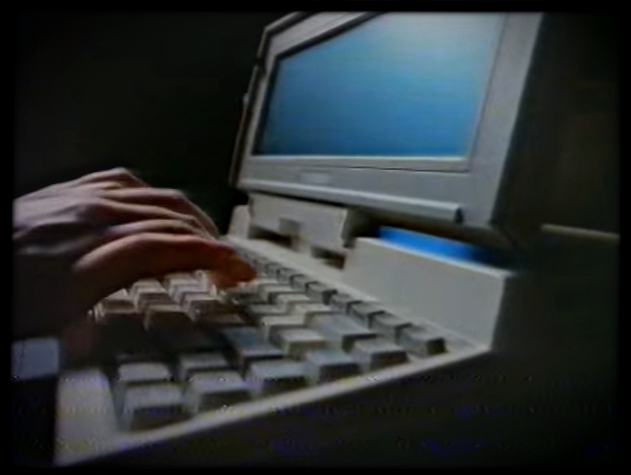 Enough of this flexing of studio muscle, though: we wanted players, with faces. Cue the Reservoir Dogs, starring John Salako, Andy Ritchie, David Hirst and – in a quaint twist of the time – more than one man called Gordon.

Meeting the lads there later – despite having monochrome nightmares about wee Gordon Strachan – was breakfast-in-bed enthusiast Anders Limpar, the Arsenal heart-throb.

He was Swedish, had come straight from Serie A a couple of years previously, and was therefore the highest height of Continental sophistication that 1992/93 could muster. At this point, you really do wonder where Sky are going with this.

Some football at last! David Seaman gets some last-minute training in against his kids, showing little mercy. In fact, this shot isn’t even on target – but Safe Hands wasn’t to know that.

Already at work and happily pumping iron, though, are John Wark and Tony Daley. It’s clear at this point that Sky were selling the Premier League not just as a mass-entertainment football revolution but a fully-blown lifestyle choice. Watching football, they’re saying, will improve you.

Over to the showers, meanwhile, where the likes of Gordon Durie, Vinnie Jones and Tim Sherwood are positively dripping in pure 1992-vintage banter:

A 1992 penny for the thoughts of Raymond Verheijen about this pre-season training regime. Here’s a reckless Darren Anderton doing sit-ups, running the risk of a persistent abdominal injury in the process.

Ah, Bruce Grobbelaar, CLOWNING AROUND. You won’t be laughing when the match-fixing allegations kick in, pal.

A charming moment next, as the 35-year-old Strachan just cannot get his head around the new era of colour TV, massive trainers and managers only being given 10 games before they’re sacked.

One final go on the pec deck for some of these top-flight old-timers, blissfully unaware that they are about to be displaced by the likes of Marco Boogers and Tomas Brolin in the Foreign Influx™ of the mid-1990s:

1993: The Premier League is fit and it knows it

The following season, Sky kept up the momentum with a similarly over-engineered production for what was now known as the FA Carling Premiership.

With Paul Ince unavailable, Sky reportedly spent 10% of their marketing budget on constructing a robot Paul Ince to creep into the bedroom of Mick Hucknell’s son with some stolen property.

In a time before the seagulls, trawlers and other self-mythologising, Eric Cantona was more than happy to give this whole spectacle his vital seal of approval.

All this was very impressive, but the Premier League was starting to attract the big-money foreign signings and the worldwide brand needed a proper vehicle.

Ahead of the 1995/96 season, Sky had grasped the truly pan-Continental potential appeal of the English top division. Once again, an all-star cast was somehow persuaded to sign up.

Backed by Queen’s “One Vision”, Arsenal players show off their skills in China, a lonely Bryan Roy struggles to keep his balance on a Dutch rowing boat, crossbar-destroyer Tony Yeboah nearly forgets his passport and Ian Rush inexplicably hitchhikes to Liverpool on the back of a tractor on his way to finding out that Robbie Fowler has taken his place in the team.

The budget only stretched so far though, it seems. Here’s Chelsea’s Scott Minto greeting a hastily-recruited extra with dreadlocks who looks a bit like Ruud Gullit from behind. 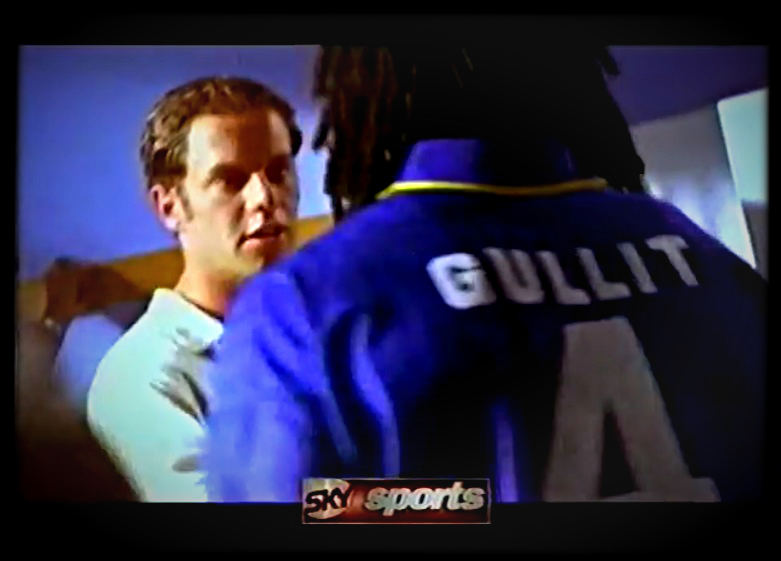 The production values were coming along slowly but surely. However, there was to be a stylistic setback the following year.

The 1996/97 season was heralded with a chaotic, acid-house affair, undermined by the likes of Ince not taking their lines seriously in the slightest, that reaches a terrifying climax of subliminal urges from Tony Adams and Gazza to purchase a Sky subscription.

As the scriptwriters began to run out of things that football is about (“Pride”, “the Coca-Cola Cup”), up pops an eloquent, post-heartbreak Gareth Southgate to gamely suggest that “it’s about taking penalties”.

This wouldn’t do at all. Footballers themselves clearly couldn’t be trusted to advertise their own product. Someone with impact was needed.

How could they find a way to crank up the gravitas another notch for 1997/98? Sean Bean, of course! This is one of his rare roles where he isn’t killed off halfway through, but he is deployed for some serious soul-searching.

“Life…it can be difficult…you know that.”

Indeed, Sol Campbell demonstrates the typical daily struggle of having a shower.

“We all need someone to rely on…”

And that someone is former Wimbledon defender John Scales.

“…someone that’s gonna be there…”

Chelsea’s Dan Petrescu does not look ready to sign any binding agreements about being there.

“…someone who’s going to make you feel like you belong…”

Stan Collymore and the Union Flag. Have we fast-forwarded to 2016 already?

Barry Skolnick, the producer and co-director of this exceptional piece of work, offers some background to its creation. “I’d just been binned by my girlfriend and was feeling pretty low,” he recalls. “I went round to a mate’s and told him that the only thing in my life I could rely on was Leeds United.”

Sean Bean’s breathy earnestness struck the producers as the perfect blend for Sky’s Premier League sales pitch. “Credibility, that was the top priority,” said Skolnick. “We could have had Cindy Crawford stick her chest out and say how much she loves football but no one would believe her. Sean Bean is known as a football fan, and is known to care about his team.

“I knew it was a powerful script so I didn’t want someone to act it — I wanted someone who could feel it.”

Bean seems concerned about the future, and what it might hold for us all. Just wait until he hears about goalline technology, muted celebrations and Leicester City winning the Premier League.

For the latest instalment of ’90s Heroes check out the Bet Bright football blog.