The following interviews are taken from ‘Your First Football Shirt’, a self-published illustrated book in which footballers and famous fans discuss their first and favourite football shirts. All profits go to two charities: CALM and Willow. The book is produced by the Football Shirt Collective and Season Annual. You can purchase a copy here. 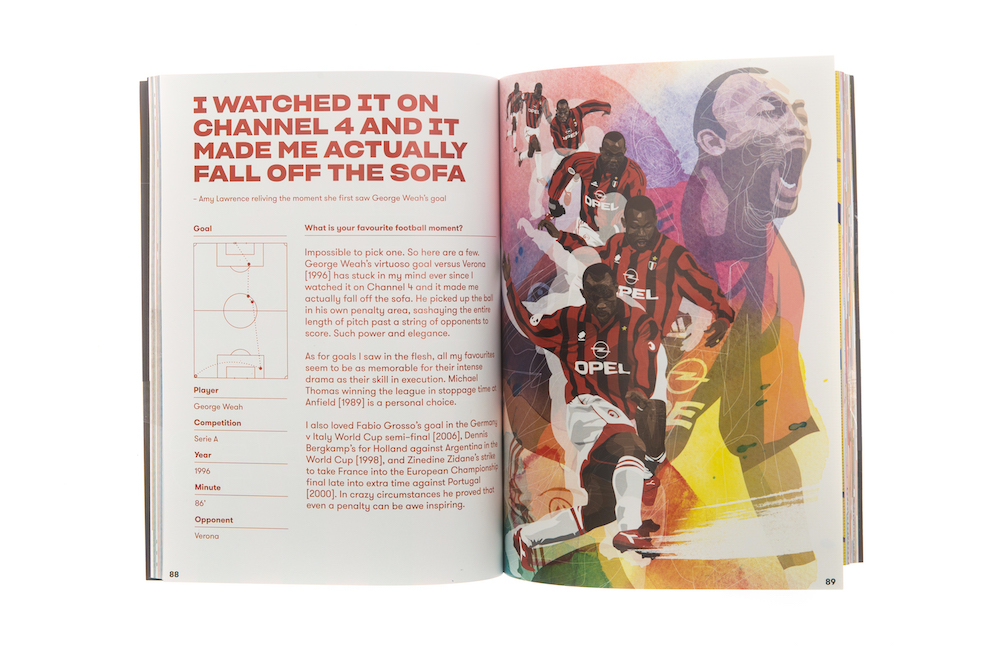 My first shirt was my ‘Chalobah 62’ shirt for Chelsea. We couldn’t afford to buy football kits as a kid, so I had to wait until I made my debut in pre-season against Crystal Palace in a friendly for my first proper one!

Favourite football shirt would have to be my Napoli shirt from the 2015/16 season when I was on loan there. The fit and design were so nice and the fact I got to have the No.94 on the back.

I like swapping shirts with friends I’ve played with or against, so it’s a tough one. I would probably say a Brazil shirt I got from Willian. I like the colour and it came from a close friend.

My favourite moment so far was making my debut for Chelsea and winning the Premier League with them in 2016/17. 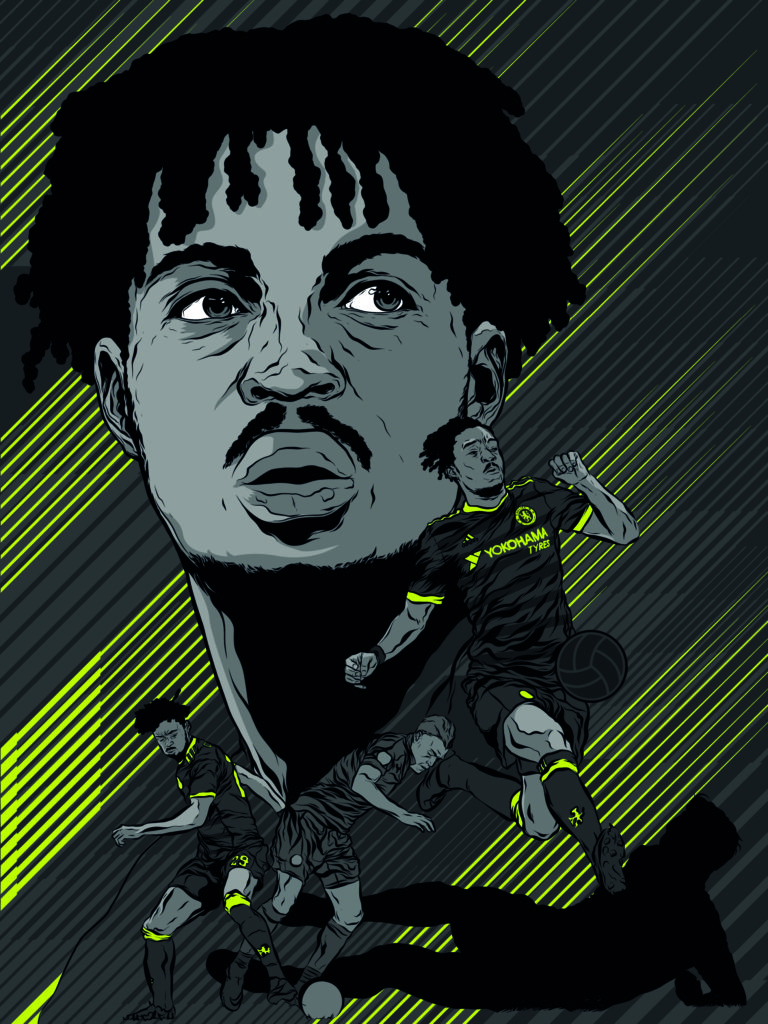 My very first shirt was my local team’s No 10 shirt, Zvezda Kirovograd (FC Zirka Kropyvnytskyi, as they’re known today). I can remember it being a yellow-and-red vertical half-and-half top. Back then, players weren’t assigned shirts so the number corresponded to the position that was played in and I always wanted to be a No.10 when I was younger.

I would say my favourite was my first home kit at Manchester United in 1991 [1990-92 kit, made by Adidas]. The Sharp sponsor and the clean Adidas design elements that weaved some black into the classic red-white colour scheme was class. The away kit was stellar as well and will always be remembered for being the shirt of that particular era, but the home kit really was the winner for me and I loved wearing it whenever I played.

My favourite moment in football was in 1990 when I was part of the Soviet Union Under-21s team that won the European Under-21 Championship. We played Yugoslavia – a team that had a young Davor Suker who ended up as the top scorer of the tournament – in the final and I scored the last goal to win 7-3 on aggregate.

Then I was part of an unbelievable team that had the potential to become one of the greatest Soviet Union teams, but it was a real shame that it had to be disbanded due to the political tensions of the country. In my mind, winning a trophy for your country at any level is one of the greatest accolades, and although I have won trophies with Man United, the international stage is a particular honour. 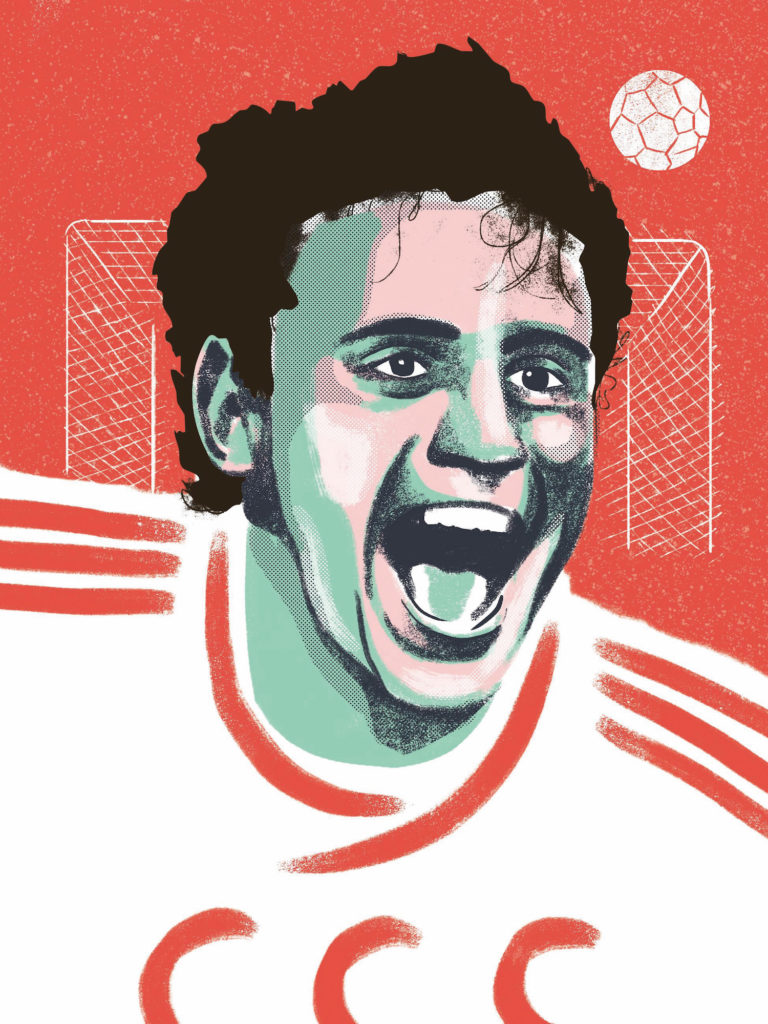 My first shirt was the Newcastle United 1982 shirt (with Umbro logos running down the sleeve). My favourite player was Kevin Keegan, so I wanted the same shirt as him.

Scoring my record-breaking goal in front of the Gallowgate. I can’t describe the feeling, it was just very, very special. Jackie Milburn was my dad’s hero; now I had his record. And at the Gallowgate End, where I stood and supported Newcastle United as a kid. 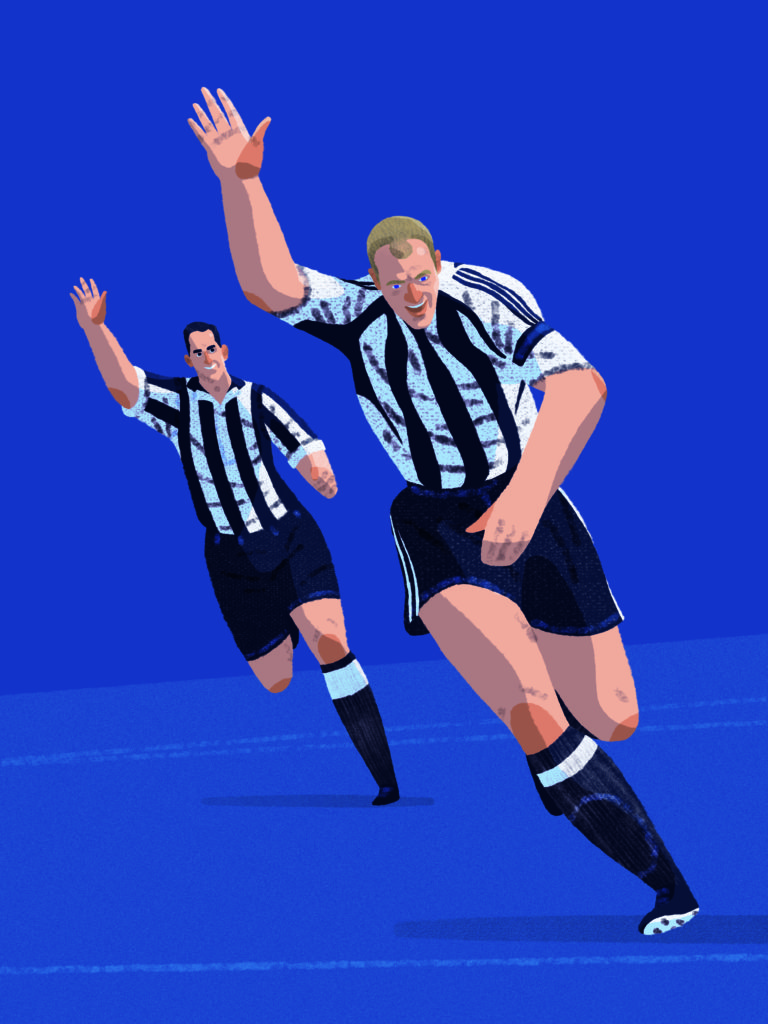 Weirdly, I’m told that my first shirt was a West Ham top bought for me by my uncle, but I have absolutely no memory of it. Apparently, he was trying to lure me to the dark side while I was too young to protest, but thankfully he failed. Like most young boys in the home counties during the 1980s, I was a Liverpool fan because they were always on the telly, but the first shirt I remember owning was an Ipswich top.

I bought it from a jumble sale (kids, think eBay, but live and with loads of old ladies) for 20p. It was royal blue with white pinstripes and had “PIONEER” written over the front. Every time it went through the wash, a little bit more of the sponsor fell off, as if the washing machine was making its own small protest against the commercialisation of football.

I had an old Brechin City shirt for some reason in the mid-1990s, and that was superb. The badge looked like it was a competition entry from a primary school and the material felt like a hot water bottle cover. I think I must have been one of only about 200 people to have that shirt – including the Brechin City players.

That just beats my Southend ‘splat’ shirt of 1997, a horrific blue shirt with an explosion of yellow across the centre. It looked like a canary had flown into your torso at Mach Two.

Your favourite ever goal

Eric Cantona’s famous goal for Manchester United against Sunderland. The ball took about 10 minutes to go from his boot to the back of the net and he was never in any doubt about it at all. He just stood there, looking over his kingdom, taking it all in.

I was trying to articulate my feelings about Cantona on Twitter the other day and it ended up getting completely misconstrued with loads of people frantically telling me that [Thierry] Henry scored more goals, or that [Lionel] Messi is much better, or that he didn’t win a European trophy. They all missed the point of Cantona completely. He wasn’t a footballer. I’m not entirely convinced that he was a human. He was just… Cantona. He existed on a higher plane, he transcended actual achievements just by being… Cantona. And that goal just encapsulated his career in England. 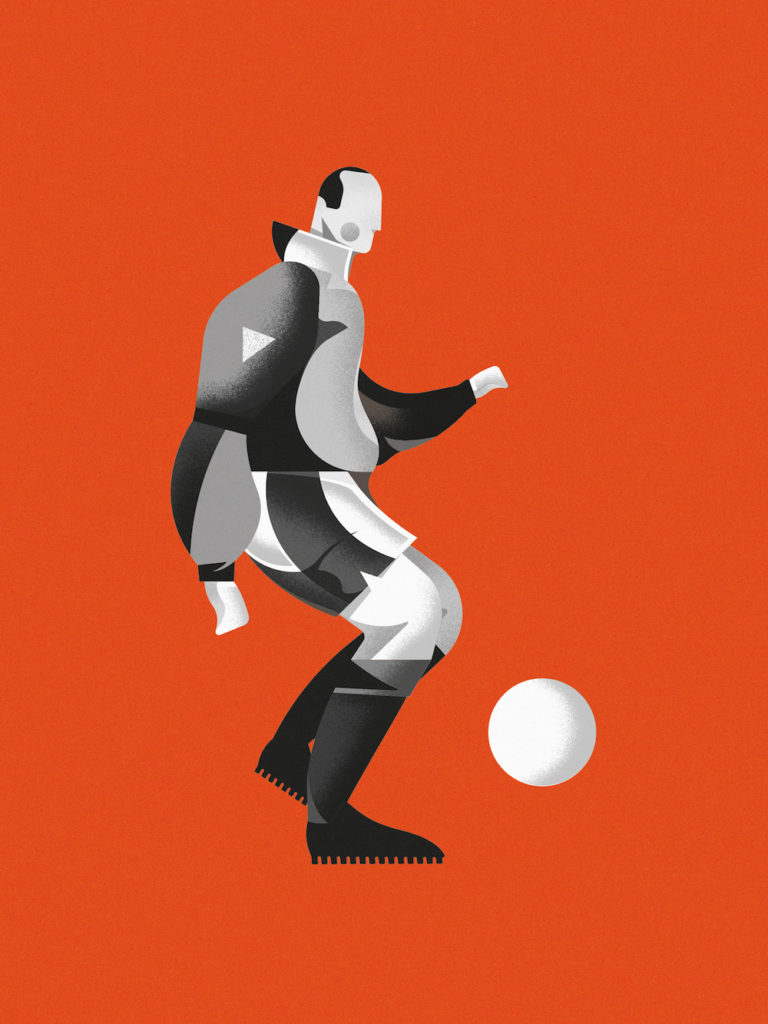 My first shirt was the England Italia 90 shirt, which had embroidered under the England badge the words “Italia 90”, so it couldn’t really go any better than that. But then we did a school pantomime and someone else played Gazza, I lent him that shirt and never got it back. There was a lot of debate over whether I’d been given it back – I hadn’t – but that was the end of it. A heartbreaking story.

I love that Denmark one from the 1980s, the Hummel one, it’s absolutely beautiful. I haven’t done it as a drunk-eBay purchase because it’s £200, I’ve checked. I don’t know how I’d smuggle it into the house.

Not Gazza’s tears, but the bit when Gary Lineker turns to the bench and says “have a word with him”. Not for Gazza but for Gary Lineker, because that’s what I think elevates him as probably the greatest living Briton. 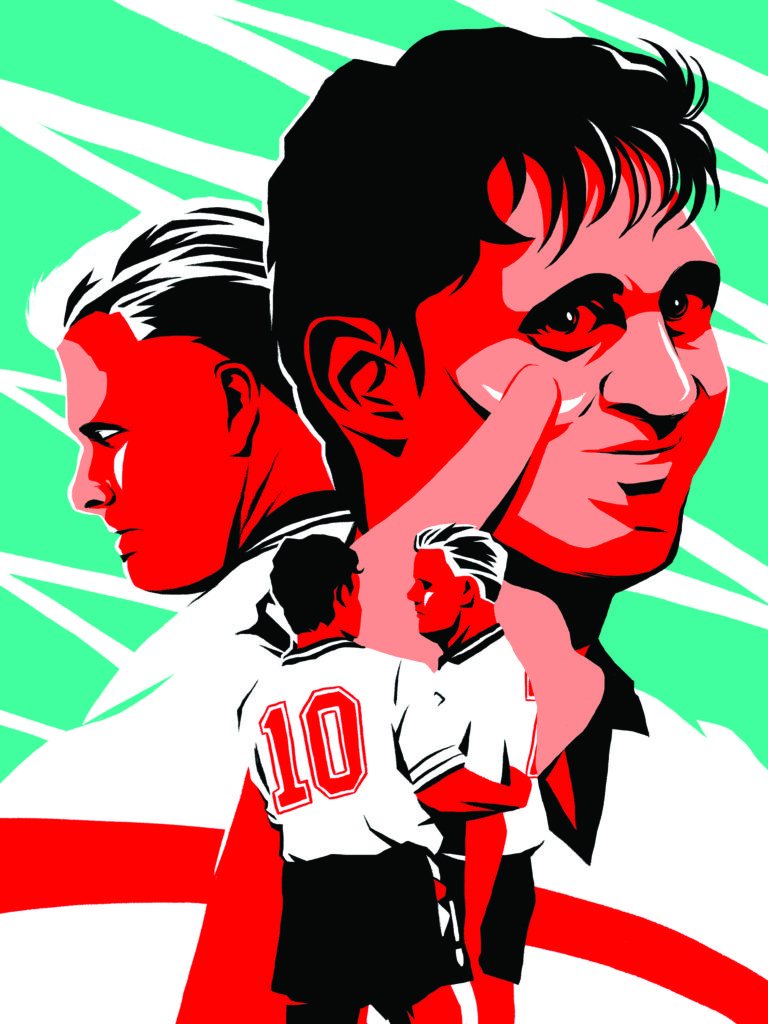 My first ever football shirt was a white Tottenham Hotspur home kit. It was so long ago I can’t remember which season it was from, but you couldn’t get me out of it!

I always supported Tottenham growing up, so my favourite shirt will have to be my first Spurs shirt. It gave me the desire to want to be someone and one day become a professional footballer.

Winning the treble with Manchester United will always be my favourite achievement in football but there was something very special about representing and captaining my country [Trinidad and Tobago], particularly at the 2006 World Cup. 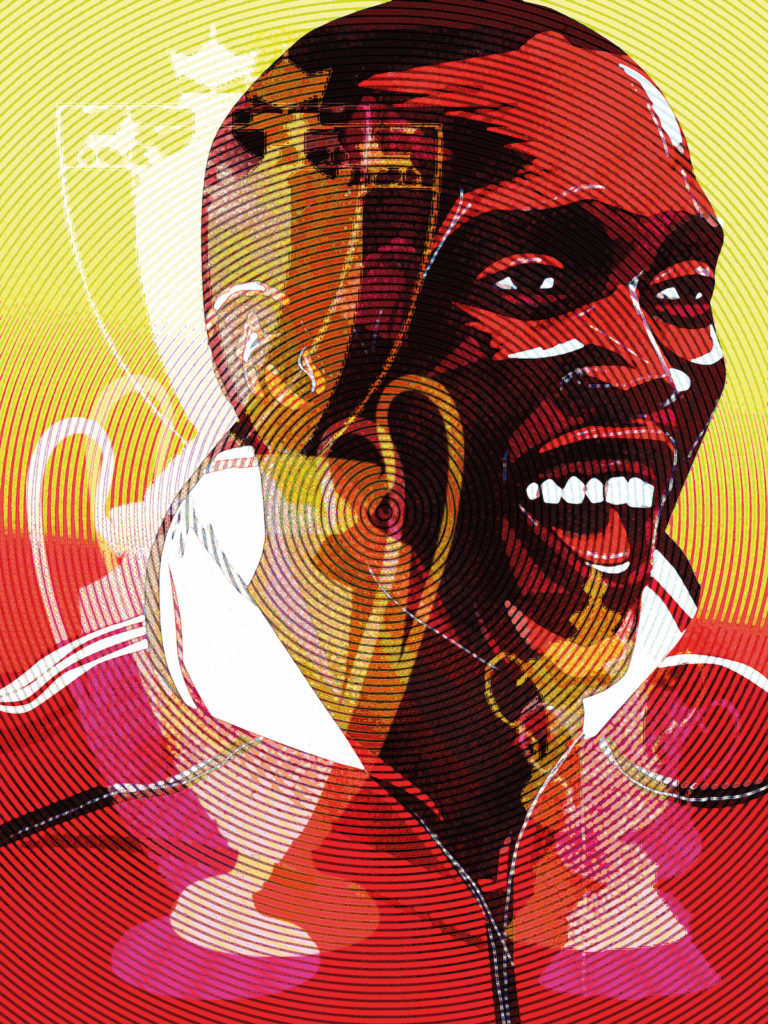