Many successful footballers, when looking back at the early part of their careers, will probably tell you that a bit of good fortune helped them on the way to becoming a fully fledged professional.

Perhaps they were in the right place at the right time to be noticed by a scout, avoided injuries that hampered their equally talented colleagues, or were handed their big break in the starting XI owing to a dearth of fit first team players.

Few, though, will have a tale as serendipitous as that of young South African forward Tyroane Joe Sandows, or Ty for short. Born into a football-loving family in Johannesburg, it was inevitable that he would take up playing at some point. Everything that has followed since has been far from it.

“I started playing football when I was four years old,” Ty recalls. “My father played football and I had five brothers who also played.”

Like most youngsters he moved into the youth set-up of a local club before, at age 11, Lady Luck intervened. 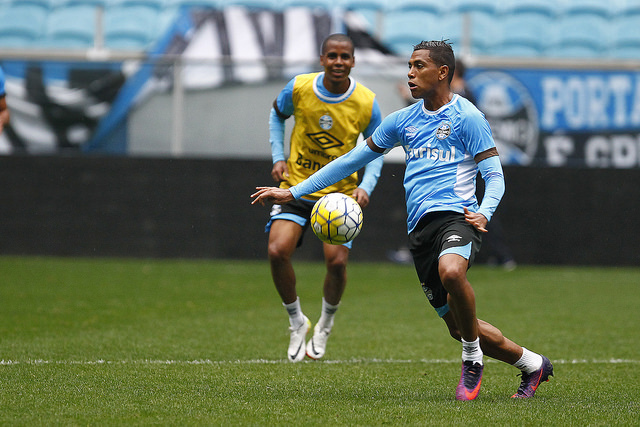 A charitable project designed to develop young South African players (with an eye on them being ready for the 2014 World Cup) had been initiated by Reckitt Benckiser, a British-based multinational company that manufactures a variety of recognisable household products.

The project, Ty tells me, was “called Shona Khona. It was like a draw, you know. You buy a product and then you send an SMS [to enter the competition].”

His number came up and he was given the chance to train with around 180 other boys. “And then from there they chose about 12 to go to Brazil.”

Those 12 boys were to spend a week during the 2006 World Cup living and training at the São Paulo FC facilities in Cotia, one of the finest training centres in the country, located just to the west of the sprawling state capital which is home to over 21 million people.

Ty, through a huge slice of luck and no shortage of skill, had won the trip of his young lifetime. “I was 11 years old, enjoying the experience of being in another country. Especially a country like Brazil, the Mecca of football.”

But the best part was yet to come. After he got back to Johannesburg his family heard that São Paulo had been in contact with the organisers of the trip and asked if Ty could return for an extended trial. “They actually liked what they saw, they saw potential, and they said I needed to come back the next year.”

At the beginning of 2007 he returned, and, he tells me, “I ended up staying the year, and I’ve been in Brazil ever since.”

It was a huge commitment for one so young but his parents were fully supportive and allowed their son to have the final say on his future. “Today I look at it and see that it was a very big decision that I made, but at the time I was just a young boy following his dream. I was really excited to live this new experience and, thank God, it really went well.” 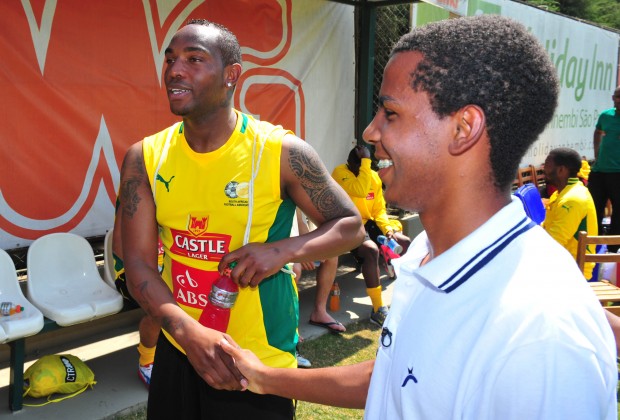 Initially, Ty attended an international school in the city and lived with the English-speaking family of one of the school’s directors. Once he started to speak enough Portuguese, however, he moved to the club’s accommodation with the rest of the youngsters whose families hail from outside the state’s capital.

He quickly settled and anyone who starts a conversation with him now would think they were talking to a born and bred Paulistano.

His time at São Paulo is a period he recalls with great affection and gratitude. “I learnt from the best. São Paulo has one of the best youth teams in the whole of Brazil so I was blessed to spend seven or eight years there.”

The academy has a reputation for nurturing exceptional talent, and during his time in Cotia there were a number of older boys Ty could look up to.

“Rodrigo Caio [winner of Olympic gold] was there, Lucas [Moura] who’s at PSG, Casemiro at Real Madrid, Oscar. I didn’t have the chance to play with them but I saw them on a daily basis.”

It was something that filled him with the confidence and aspiration that may have been lacking had he stayed at home. “You see that they went [along] the same path as you went [along]. If they can make it, you also believe that you can make it.”

In 2014, however, São Paulo decided that his contract would not be renewed as part of a cost-cutting operation at the debt-ridden club – a decision criticised by some fans. After two weeks training with PSV Eindhoven, Ty was picked up by Grêmio, another Brazilian giant from the southern city of Porto Alegre, just a few hundred kilometres from the Uruguayan border.

There he has encountered a different style of football. Teams from the South, he tells me, play more in the Platense tradition of fight and desire rather than the possession-based approach more common in the socio-economic and footballing nexus formed by Rio de Janeiro, São Paulo and Belo Horizonte.

His form in Grêmio’s so-called transition group, a step between the youth and first teams, also caught the attention of coaches back in South Africa. Ty’s first international call up was for the Under-20 squad that travelled to the junior version of the Africa Cup of Nations which, he says, “was an honour, playing for my country at that level.” 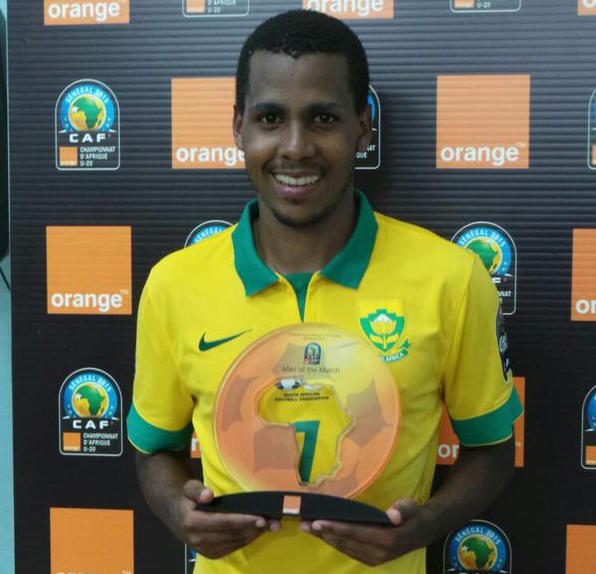 Despite the fact that the team went out at the group stage the tournament was a success for Ty on a personal note. “I was able to score a hat-trick [against Zambia, in the third group game] and I was in the 18-man squad of the [best players of the] tournament.”

A year later this performance also contributed to the decision by South Africa Under-23 coach Owen Da Gama to take him to the 2016 Olympics in his adopted homeland, a place he refers to as “my country”. The call up, he informs me, “was a surprise…it was a really great surprise.”

As another twist of fate would have it, South Africa’s opening game was against Brazil. Ty didn’t get on the pitch but still describes being in the squad that would take on the likes of Neymar as “something I’ll cherish for a long time”. Ironically it was an old friend from his formative years in Johannesburg, Keagan Dolly, now of Montpellier in France, who kept Ty out of the first team.

The Olympics in general, he thinks, were a success for the samba nation. “It was something that brought the country together. People from outside Brazil came and really loved it. The people from Rio and from Brazil welcomed them with open arms.”

It was clearly a positive on a personal note as well. When Ty returned to Grêmio after his sojourn in Rio the new manager Renato Gaúcho, a Grêmio legend capped 43 times by Brazil, sequestered him permanently for the first-team squad.

He has since made his debut, “something that will be in my mind forever”, got his first assist, and even earned a place in the match-day squad for both legs of Gremio’s Copa do Brasil final against Atlético Mineiro, which his teammates won 4-2.

He describes the experience as “a bit strange,” as he had only been in the senior ranks for three months, but he hopes to “live more moments like that” in the blue, white and black striped shirt. 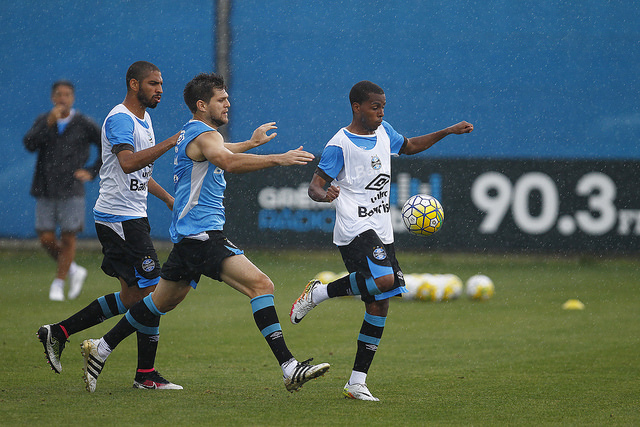 For this year Ty’s goal is “to become a more regular player in the squad, to start more regularly.” Once that is achieved, though, he is keen to push on still further: “I would like to stay in Brazil for the next few years to gain experience and grow as a player and then go to play in one of the top five leagues in Europe.”

I ask him to specify exactly where and the South-African-brought-up-in-Brazil’s answer demonstrates the global reach of the Premier League. “Growing up I really liked Arsenal so it would be a dream come true to play for them.”

In 2014 he obtained Brazilian citizenship to sidestep rules that limit Brazilian clubs to five foreign players, which has opened up the possibility of a call up to the Seleção in the future.

When I push him on whether he would rather pull on the yellow and green shirt of the land of his birth or that of Brazil at senior level, Ty remains diplomatic. “The future’s in God’s hands. I’d be happy with both. If I’m called up to the Bafana Bafana squad I will honour that call and if that happens for the Brazilian squad I will also be very happy.”

Ty Sandows interview: The South African competition winner making a name for himself in Brazil
4.8 (95.38%) 13 votes