It was only after half an hour of chatting to Julian Schuster that he broke eye contact for the first time. The SC Freiburg captain bowed his head before spreading his arms as if impersonating a bird of prey.

Slowly, Schuster then began to lift his head whilst holding the rest of his lanky frame in position. As he did so and more of his face became visible, you could see his eyes had widened, his face full of hope. This was no display of method acting from Schuster. He was merely repeating the team’s reaction to a speech given by Christian Streich – at present, the longest-serving coach in the Bundesliga, and also the division’s most powerful orator.

This particular speech that Schuster remembers was delivered in the away dressing room at Hamburg back in May 2015. Schuster didn’t play that day in Hamburg and this season he has also barely featured. He recalls that when he was chosen by his fellow players to be captain back in 2012, Streich told him that he should be prepared not to play every week. “But I still had to be behind everyone and behind the team,” he says. For a player who has been at Freiburg since 2008, it isn’t something Schuster struggles with. 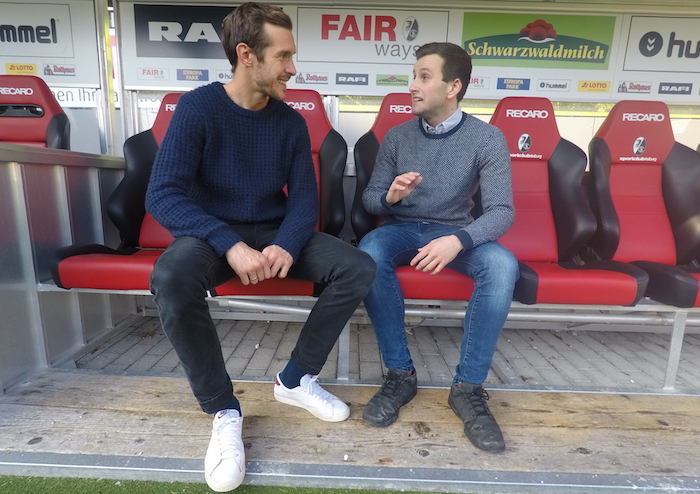 No one at Freiburg is better placed to tell you then that Streich is the same person inside the dressing room as he is in public. “One of his greatest strengths is understanding the moment and saying the right thing, independent from football,” says Schuster.

That’s often very much to the benefit of the media. Streich der Woche (which literally means ‘Streich of the week’) has been a feature for several German publications over the past few years.

The coach’s cult status was evident when The Set Pieces attended his press conference the day before Freiburg played champions Bayern Munich. A crowd of thirty journalists squeezed into the club’s tiny press room to listen to Streich for what turned out to be 40 minutes. A number of videos of the 51-year-old giving media briefings have gone viral in Germany this season, with Streich talking as effusively about social responsibility as he does about football.

The SC Freiburg coach says that he talks about these issues merely because he’s asked about them. “It’s just what I think,” Streich tells The Set Pieces. “Everyone else can decide whether it’s important or not.”

When it’s put to him whether other influential figures in sport should talk about such issues, Streich reveals one of the tenets of his philosophy. “Everyone has to decide individually,” he says. “We all have a responsibility to ourselves. The best thing would be if everyone confronted these things themselves and thought about their own individual responsibility.”

That ties in with what he said in November when he spoke of wanting “vocal and constructive players who can debate things with one another”. It formed part of a longer discussion on Streich’s view that social media, and communication in general, should be a subject in school. The video now has nearly one million views on Facebook.

“It should be that during the week for three or four hours, you confront what you’re doing because they [school children] are on their phones constantly. That is the decisive form of communication.”

Streich is very much one of a kind. He only lives 300 metres from the stadium, so he always cycles to work. So too does club captain Schuster. He lives just 500 metres away, but in the other direction. With a grin, Schuster admits that he hasn’t yet raced his boss to the ground.

Once the squad have arrived at the Schwarzwald-Stadion for training, Schuster reveals that Streich “won’t just come in and say: ‘Today it’s shooting, or crossing.’”

That includes Donald Trump becoming president of the United States, as striker Nils Petersen told German magazine SportBild this week. But Schuster gave a more tragic example of something they’d talked about as a squad recently relating to the local area.

First, you need to know what the city is like. Situated at the foot of the Black Forest deep in the south west of Germany, it’s a picturesque region. “It’s quiet and there’s a lot of green space,” as Schuster says, with the university lending a laid-back student atmosphere. The local community are of a sunny disposition, to say the least.

“When we [the players] go into town, we don’t want to be seen as footballers. We want to be people from Freiburg,” Schuster explains. “We have a really enjoyable job but we’re just one of many. We talk to everyone. We say hello to everyone. We thank everyone.”

The picture Schuster paints is not of a place where you would expect any sort of violent crime to occur. It therefore made what happened in Freiburg back in October even more shocking. Maria L, a 19-year-old medical student, was murdered on her way home from a party. Two months later, a 17-year-old Afghan refugee was charged with the crime, leading to further debate in Germany about immigration.

Naturally such conversations took place around the city, including at SC Freiburg. The crime scene was only a couple of hundred metres away from the Schwarzwald-Stadion. When asked about it in his press conference, Streich spoke at length, detailing his concerns about the culture of blame in the country along with growing xenophobia.

Schuster confirms that Streich and the squad also discussed the matter in the dressing room. In the view of the 31-year-old midfielder, it brought home the responsibility they have as Bundesliga players. “We can talk about things between ourselves but we’re also in the public eye and can reach out to a lot of people. From that point of view, it’s pretty important that we have a clear opinion on such issues and that we convey it.”

Schuster says being able to deal with responsibility on and off the pitch is “a little bit Freiburg”.’ It’s unsurprising then that the idea of society plays an important role in how Streich coaches the team. The players are given an opportunity to come up with their own routines for attacking and defending, with Streich encouraging his players to be involved.

Schuster explains that, once split up into groups, the squad have 30 minutes to think about various scenarios for corners, free-kicks and throw-ins. They then go out on the pitch to test the routines before analysing the footage together as a group. “You learn better when you think and consider something,” says Schuster. “There are other situations where he’ll ask us something, or when we see something on the pitch then we say it.”

He adds that, “Of course, the coach always has the final say. But he’s approachable, he asks us things and we can contribute.”

On the whole, Streich’s methods have worked. Freiburg started 2017 in the top half of the Bundesliga despite having the division’s second smallest playing budget at €25 million. It’s an achievement that shouldn’t be sniffed at.

As for his set-piece delegation, that has also been a success in an attacking sense. Thirty-three of the 75 goals Freiburg scored on their way to promotion last season came from attacking set-pieces. And the ratio has remained roughly the same in the Bundesliga. 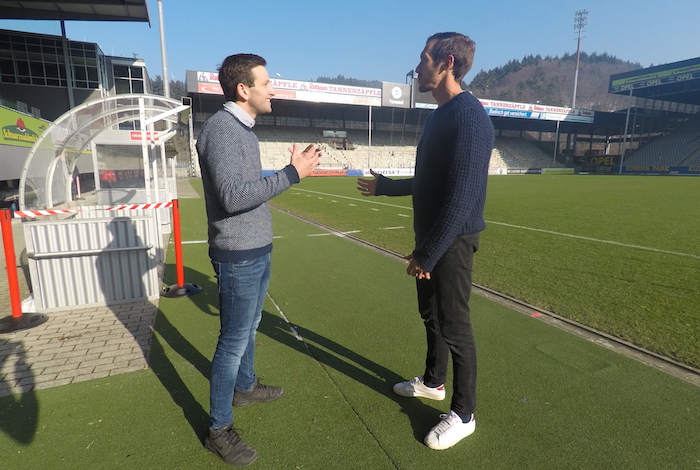 The squad might need a bit of help on their defensive plans, however, with Freiburg conceding the highest number of goals from set-pieces in the top flight this season.

This unfortunate habit cropped up again on a freezing night last Friday against league leaders Bayern Munich. Freiburg’s exciting combination play going forward was a testament to their coach’s methods, particularly when Jannik Haberer gave them a shock early lead. But Bayern’s equaliser, a volley by Robert Lewandowski from a first-half corner, wasn’t such a ringing endorsement.

Had the game finished 1-1, the 20,000 or so locals crammed into the ground would have gone home happy with a fair result. But instead Freiburg conceded a last-gasp winner. It was a tremendous strike from Lewandowski in the 91st minute, but from a Freiburg perspective it was yet another late sucker punch to remind them of their last spell in the Bundesliga.

When the club were relegated in 2015, it wasn’t entirely remarkable given their relative lack of resources. But Freiburg largely had themselves to blame, allowing a winning position to slip from their grasp on six separate occasions after the 87th minute. Schuster tries to put his finger on why it kept happening. “I think it was more mentality,” he says. “A little bit less mentality means that you also lack a little bit of concentration.”

The last of these six late goals was in Hamburg. “They equalised with a goal that was a foul,” Schuster explains. “Everybody was really down.” But that was until Streich strode into the dressing room. “You could tell he had a feeling for this sort of moment.”

Schuster can’t exactly recall what Streich said. All he remembers is how pumped the team were after he had spoken. “He said the words and everybody was like this.” That’s when Schuster lowers his head and stretches his arms out wide, as if to place them around the shoulders of his teammates.

Although Freiburg couldn’t avoid relegation, they were never going to be on the floor for long. The choreography by the fans in their first game the following season epitomised the club’s tubthumping spirit: “We got knocked down but we will get up again. You are never going to keep us down.”

With Christian Streich at the helm, it’s difficult to argue. Both he and SC Freiburg are unique to football.