Africa and particularly east African nations are well-represented among the bottom third of the FIFA rankings.

However, while these nations may be among some of the least well-funded in world football, on the field their team kits burst with colour and originality, patterned with local symbols and insignia – giving voice to cultural pride and heritage in nations where unity and national identity are sometimes intangible goals.

These kits are not produced by Puma, Nike or adidas, but by start-up AMS Clothing, and a 23-year-old university student in Australia.

Luke Westcott is not your average 23-year-old. The Melbourne-based international business student, who grew up designing football shirts for fun on MS Paint, has already travelled to some of the world’s least accessible countries, met FIFA president Gianni Infantino, and designed and supplied some of the most eye-catching kits to a host of nations both in and outside of football’s governing body.

“I always had a passion for sports jerseys and have been collecting national football jerseys in particular since I was in high school. To feed this obsession I starting buying and selling jerseys on eBay from about the age of 16,” Westcott explains.

“I was constantly receiving messages from customers asking for the jerseys of obscure national teams – mostly from Africa, which I simply couldn’t source. Eventually I got the idea of creating my own brand so I could supply these teams myself and then cater to this fairly large market of collectors.”

AMS Clothing was founded in 2014, with Westcott and his company targeting a perceived gap in the market – nations overlooked by more established brands. He began his quest with the Confederation of African Football’s (CAF) newest member South Sudan, whom he got in touch with, in true modern style, via social media.

“I quickly put together some designs and got in contact with the president of the FA via Facebook,” says Westcott. The very first AMS kit was worn by South Sudan in their debut AFCON qualifier in May 2014 against Mozambique, and the Bright Star, as they are known, have been partnered with AMS ever since.

Today, Westcott’s association with the South Sudan squad goes beyond just being the kit supplier, also acting as a surrogate agent for some of the players, creating CVs and highlight reels, as well as managing social media for the FA.

The international business student first travelled to South Sudan for the kit’s inauguration, along with some of the country’s Australian-based players, and effectively joined the training camp for a month in Juba, attending sessions and bonding with the players and coaching staff.

“They were preparing for their Africa Cup of Nations qualifier against Benin and I was lucky enough to be at Juba Stadium when the match was played,” he recalls. “It was unbelievable seeing guys like Stephane Sessegnon and Rudy Gestede, who earns tens of thousands of dollars a week, playing against some of the locally-based South Sudanese players, who average about $50-100 [£30-60] a week.”

At that game Westcott rubbed shoulders with visiting FIFA President Infantino, who is now a proud owner of the South Sudan shirt. 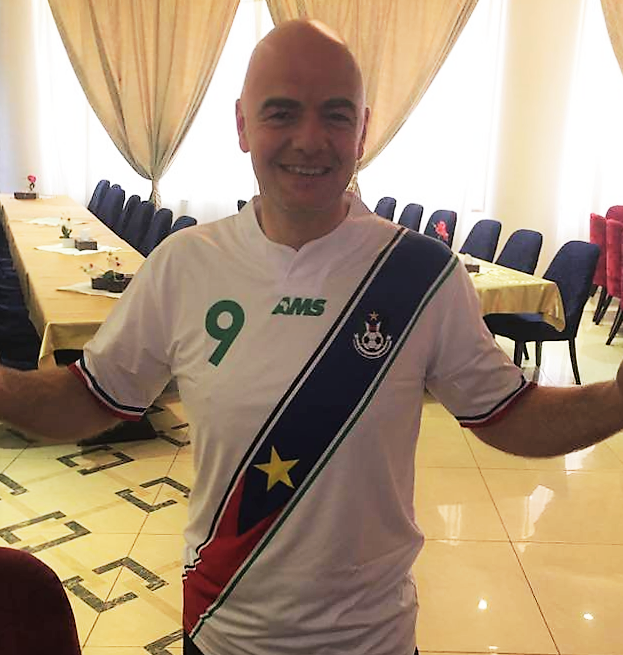 The stand-out feature in all of AMS’s kits is the style. Deliberately steering away from the cookie-cutter look of many of the big players in the market, the kits feel authentic to each team while also being the sort of designs that would have football hipsters reaching for their credit cards.

“As there are very few brands that make fully customised kits, most football associations don’t realise the possibilities of what their kits could look like if someone put in the effort of designing something special,” Westcott adds.

“We want to create designs that will be popular with fans in each country. We can add patterns or symbols that represent the culture of a nation. In some cases, we will try to get feedback directly from the national team players and it is important to us that the players are proud to wear the uniforms.”

Of all the designs, Westcott reveals that it is Sierra Leone’s patterned blue that has proved the biggest commercial success. However, the kit has a more poignant significance for Westcott.

“At the time it was the best design we had created,” he explains. “It gained some major publicity as it was worn by Sierra Leone at a time when their national team was having to play during the Ebola epidemic that terribly affected the country.”

During the worst of the outbreak in 2014 and 2015, the national team were unable to host crucial Africa Cup of Nations qualifiers and forced to play at neutral venues. Although the majority of players were foreign-based, Westcott notes that they were quarantined during travel, and faced regular discrimination and chants of “ebola” from opposition crowds.

Westcott live-streamed Sierra Leone’s qualifier against regional powerhouse Ivory Coast. Despite losing narrowly after going a goal up, the match proved the team’s quality and spirit in adversity. He hopes that the kit can act as a symbol of unification that the players and fans can wear with pride. The same is true for South Sudan, Westcott’s closest collaboration.

“In a country that has been gripped by civil war and often split along ethnic lines, the national football team, which is comprised of players from many different tribes, is a crucial symbol of unity,” he says.

“It has been very inspirational for us to see the impact that the national team has on the country and we are doing our best to really focus on South Sudan as a place where we can make a very positive impact.”

What started out as university side venture has grown to become an unqualified success story, but Westcott has also learned the challenges and idiosyncrasies of working in certain parts of Africa. He cites classic examples of merchandise going ‘missing’ without explanation at customs, the problems delivering to locations without street addresses, and even officials appropriating kits in order to resell them on the black market.

“Of course it’s never easy doing business with some of the world’s less developed countries. There are many considerations that need to be made that you wouldn’t even think about when dealing in more developed regions,” he adds.

“Having said that, the main reason that we have been able to supply these teams while being such a small brand is because there are no other brands focusing on these regions.”

Westcott claims making AMS a fully African brand – achieving local, ethical production within the next three years – is the long-term goal of the company (the kits are currently produced in China), while he is also planning to grow stronger links with those currently outside FIFA’s jurisdiction.

“We are aiming to work closely with ConIFA, the confederation that represents unrecognised nations that are not able to join FIFA. We are already supplying Barawa, Darfur, Western Sahara and Zanzibar, which are all ConIFA members and regions of Africa that have been unable to gain formal representation on the world stage.

“By playing in international tournaments and having AMS supplying them with culturally symbolic kits, it provides a huge boost to the national pride of these regions that can now share their culture and heritage through football.

“Whilst we have mostly been able to just sell to the international market at this stage through our online store and a few other online retailers, our major goal is to provide the African domestic markets with official and affordable national team jerseys. We are just starting to do that in South Sudan, and hopefully a few other countries will follow in the coming months.”

The business model is well laid out, but Westcott is aware that the nature of the regions in which he operates means things can change very quickly. The Eritrean national team, one of AMS’s first orders, hasn’t played since October 2015 when 10 of their first team players defected and were granted asylum on an away trip to Botswana for a World Cup Qualifier.

“We want AMS to go beyond just providing kits,” says Westcott. “Our mission is to support football in Africa in whichever way possible.”