Like many British coaches who don’t have the benefit of a professional playing career on their CV, Ian Burchnall has had to be inventive in his search for opportunities.

As a 22-year-old he started out coaching the Leeds University team, winning the British Championship in 2010, and juggled his responsibilities with part-time roles in the Leeds United and Bradford City academies.

Through his work at Bradford he was introduced to Brian Deane and, when the former England striker was appointed by Norwegian club Sarpsborg 08 in 2012, he asked Burchnall to be his assistant. Together they helped the newly-promoted side survive their first two seasons in the top flight before Deane returned to England in 2014.

Burchnall, who had settled in Norway with his young family, decided to stay, taking another coaching position at Viking Stavanger. His recent appointment as Viking’s new manager is reward for his enterprising outlook, completing an unconventional journey to fulfilling his ambitions. Naturally, his friends were delighted for him.

“My mates have been hammering me on the WhatsApp group saying now I’ve got to get a sheepskin manager’s jacket and all of this,” he says. “They’re great, they follow all the matches and normally try and get out once or twice a year to watch a game.” 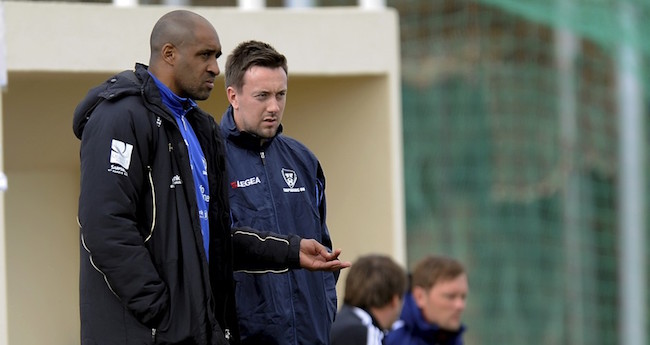 Of all the challenges Burchnall has faced in his nascent career, having Deane as a housemate during the first few months at Sarpsborg was perhaps the most unexpected. It made for an interesting settling-in period, with the duo initially living in each other’s pockets.

“When we first moved, Brian bought a house. And while he was waiting for that to go through he was living with me and my wife for the first four months,” Burchnall recalls. “I think my wife got tired of listening to conversations about football late into the night, but it was good for us as we were fully immersed in what we were doing.”

Deane eventually moved out, but the chemistry between the duo remained as they guided Sarpsborg to safety and reached the semi-finals of the Norwegian Cup. “It was good working with Brian. He’s got a lot of knowledge and let me do what I like to do – which is coaching out on the training pitch. We worked well together.”

After replacing Kjell Jonevret at Viking Stavanger in November, Burchnall is now relishing his first Tippeligaen campaign as a manager. His two seasons as Jonevret’s assistant will aid his preparation, but the 33-year-old knows he is now in the firing line.

“It’s a different kind of challenge, a different type of pressure,” he tells The Set Pieces. “It’s a big club and a big job, so it’s exciting. But the club hasn’t been in the best financial state over the past few years, so it’s going to be a big test to try and get back to where everybody expects us to be.”

As one of Norway’s leading clubs, Viking have a proud history. But recently they have struggled to keep pace with domestic powerhouse Rosenborg. Their last title came all the way back in 1991 – when a fledgling side featuring a young Egil Ostenstad won the championship only three years after promotion – and a decade later the club celebrated the anniversary of that triumph by lifting the Norwegian Cup.

The list of Viking managers over the past 12 years includes experienced names such as Roy Hodgson, Uwe Rosler, and current Denmark head coach Åge Hareide, who played for Manchester City and Norwich in the 1980s. As he prepares to take his first steps into professional management, Burchnall is aware that expectations are high.

“Historically Viking is one of the biggest clubs in Scandinavia. The supporter base is much bigger than Sarpsborg and, in the last few years since they moved into the new stadium, they have had some big name managers as well. The expectation in Norway is that Viking should always be at the top. At Sarpsborg there wasn’t that kind of pressure.”

The biggest challenge Viking currently face lies far from the action on the pitch. As Norway’s oil capital, Stavanger has suffered from falling barrel prices, having a direct impact on the club’s resources through reduced sponsorship deals. Without a huge transfer budget available, the owners have sought a change of focus and were attracted to Burchnall’s experience in player development.

“The club’s been very focused on bringing through the youth players and developing their own players because of the lack of finances. With me having a lot of experience working in academies and with player development, that was the kind of manager they were looking for. I think the board were looking to make a change and freshen things up, and try and go in a new direction.”

Burchnall hopes that new direction will follow a similar path to Mauricio Pochettino’s young Tottenham team, which he sees as the ideal model for success.

He is also encouraged by Graham Potter’s impressive spell in charge of Swedish club Ostersunds, and utilises the network of British managers in Scandinavia to bounce around ideas for training exercises.

“It’s interesting for me because we can try and develop something more sustainable within the club. I look at what Tottenham have done in the past couple of years since Pochettino has been there, and it’s a similar kind of club within its league: a big club with a good history, great supporters, but one that hasn’t – in the past 10, 15 years – really achieved what it should have.

“I know Graham [Potter] really well because he coached at Leeds Met when I coached at Leeds Uni. He’s done an incredible job up there at Ostersunds. We talk a lot and exchange ideas, and also with Mark Dempsey – who was [Ole Gunnar] Solskjaer’s assistant at Molde and Cardiff – and has been managing at Haugesund and now Djurgardens in Sweden.” 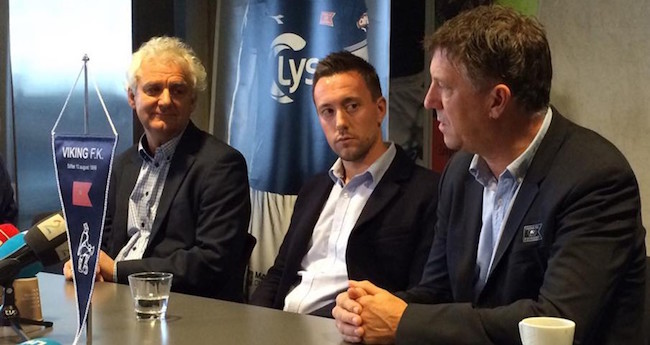 Now in his fourth year in Norway, Burchnall has picked up the language, but prefers to coach in English. Given the fluency of the locals, it’s often the best way to manage – highlighted by one particular occasion at Sarpsborg.

“They’re so good at English,” he says. “I wrote something on the board for the players once, and one of them corrected me on my grammar. He was questioning it, so I checked it out and he was right.”

As long as he can get his message across, Burchnall is happy – and he will spend the next four months doing exactly that before the 2017 Tippeligaen season begins in April. A pre-season schedule that includes trips to Spain and Stockholm, for a friendly against Mark Dempsey’s Djurgardens, should give him plenty of time to impress his ideas on the squad.

In the future, Burchnall would consider a return to England, but for now he’s only thinking of Viking Stavanger and the exciting challenge that awaits.

“It’s a good place to live and a great place for me to develop as a coach,” he says. “I’d like to come back to England and manage one day, but I’m not in too much of a rush. I’ve seen how volatile the game is [in England], it’s a big risk. If you don’t do well in your first five or six games and you don’t have a long history or reputation, you don’t last very long. So for me it’s better to build a longer career away.

“When you go out into Europe, I think people value the football education and experience more. There was always something blocking the route in England when I wanted to take the next step up. I felt I could accelerate my steps up the ladder if I took a chance and went abroad. For any coach or player looking to develop, moving abroad is a fantastic decision.”