When James Keene moved to South Africa in 2016, the experience wasn’t a new one. It was a new country, yes, and a new culture, but by now he was accustomed to the period of adjustment that comes with a change of location.

Keene, a 32-year-old striker from Somerset, has now played in five countries: Sweden, where he first moved on loan from Portsmouth in 2006, Norway, Israel, India and South Africa. He’s an unusually well-travelled Englishman.

Certainly, Keene’s experiences differ significantly from the typical English footballer. His travels have provided him with a different outlook, a taste of wildly different cultures both on and off the field.

“You meet so many people from around the world and you learn so much from them,” Keene tells The Set Pieces. “I’ve learnt a lot about religion and beliefs and cultures. It’s really humbled me.

“I’ve learnt a lot about myself and football. I understand other cultures and the way they do things. Would I recommend it to others? Yes, for sure. It’s a great journey if you want to test yourself.”

Keene’s globetrotting journey began somewhat circumstantially. A lack of opportunities at Portsmouth, with whom he had signed his first professional contract, led to loan spells at other English clubs: Newbury, Kidderminster, Bournemouth, Boston. His options, it seemed, were limited. But in 2006, at the age of 21, he was handed an unlikely opportunity.

“It was a chance to try something new,” Keene says of his move to GAIS – or Göteborgs Atlet- och Idrottssällskap – a club then in the Swedish top flight. “I played games and scored goals [but] moving away from my friends and family was tough.

“I was no longer a two-hour drive from Portsmouth to Wells. Plus, I arrived in Sweden in winter and it was freezing. I’ve never worn so many clothes to training. And the language was different, so I sat in the changing room understanding nothing. But I tried to pick up the language as fast as possible, and now I’m fluent.”

Sweden is now essentially a second home to Keene. Following a season with GAIS he joined IF Elfsborg, where he stayed for six years. He was settled and comfortable. And he was playing European football too, against opponents such as Napoli, Lazio, Valencia and Celtic. That would almost certainly not have been the case had he stayed in England. Nor would he have met his wife, Catrine, or grown infatuated with the Scandinavian way of life.

“The quality of life is better,” he explains. “There’s less crime, it’s very well organised and they have very good schools. It’s a very outdoor kind of living. There’s good food, you meet your friends after work for a coffee, people are out on the lakes swimming. People really love the summers. The winters are a little different, though: cold and dark. You don’t see many people but you look forward to the summer. And the Scandinavian women are also very beautiful.”

At Elfsborg, Keene adjusted quickly. He scored on his debut and the fans warmed to him. “Everyone spoke English and they were a great bunch of boys,” he recalls. “The coach, Roland Nilsson, was great to me. I became a fan favourite early, so wherever I went I was welcomed very well.”

Keene moved west to Norway and Fredrikstad FK in 2011, but he played just nine games during his loan spell and joined Swedish side Djurgårdens IF the following year. Then, in 2013, the forward found himself on a plane back to England, his homeland which had grown unfamiliar.

“It was just to try to help the club out at a tough time,” he says of his return to Portsmouth on loan. He had no intention of staying for long, though: Keene had whetted his appetite for discovering new cultures, and in 2014 he joined Bnei Yehuda, a club based in the Hatikva Quarter of Tel Aviv, Israel.

“It was very different,” he says. “It’s a beautiful country, with lovely beaches and great food. But it was a culture shock: not everyone spoke English and the changing rooms were silent before games. You could hear a pin drop. On the bus to away games, on two-hour trips, not a word was spoken. And we had sacrifices before games. One day we had a spiritual cleansing where fans came to the training ground. They put salt all over the pitch and some kind of smoke. Then they cut the head off a chicken and let the blood run across the pitch.”

Keene and his wife were also faced with the constant threat of aerial bombardment in Tel Aviv, the ongoing conflict with Palestine leading to an uncertain existence for those living in the city.

“I never felt unsafe,” Keene insists. “It’s strange walking into a shop and they ask you if you’re carrying a weapon. Sometimes my parents would call and ask me if I’d seen this or that today in Israel. But we didn’t hear or see anything. Once there was a practice bomb alarm and we were at home panicking. We didn’t know what to do or where to go and had no idea it was a practice alarm. Luckily, the neighbours told us what was happening.”

Shortly after Keene left Tel Aviv, his friend Rade Prica, who he had met when playing against Maccabi Tel-Aviv, was forced to take cover in a shelter for two weeks. Fortunately for Keene, his experiences of Israel were more positive.

By the end of the season, though, he had made just 14 appearances for Bnei Yehuda. So he departed, and again opted for adventure. His next destination was India, which had seen an influx of high-profile players and coaches from abroad. Keene joined NorthEast United, a club based in the city of Guwahati.

“Playing in front of so many people and being treated like a superstar was great fun,” Keene says of his experience in the Indian Super League. “But as a footballer it was hard going to a five-star hotel and looking out and seeing slums everywhere. The contrast between rich and poor is so big. It was overcrowded and dirty. The poverty really makes you realise how lucky you are. These were people with no homes. Football gave them something to look forward to.”

Keene also had difficulty in navigating the treacherous roads of India. “They are terrible and they never stop using the horn,” he says. “It’s 24/7. There are cows and holes in the roads. We trained in Shillong, which was at the top of a mountain, for pre-season. The drive up was about five hours on the worst road I’ve ever seen. There were landslides.”

He survived the journey and went on to experience a burgeoning footballing culture. Keene was also granted the pleasure of playing alongside and against some big names, including World Cup winner Joan Capdevila. Yet one season proved to be enough, and in 2016, after a return to Sweden with Halmstad, Keene moved to South Africa.

At Johannesburg-based Bidvest Wits, Keene thrived and quickly found himself at home. But after two successful years at the Bidvest Stadium, he announced in May that he would be joining rivals Supersports United.

“I love South Africa,” Keene says. “People who say it’s dangerous have clearly not been here. It’s similar to Israel in that people read and take what they want from it. Of course, there are places you don’t want to go, but there are in the UK and Sweden too.

“When I got here, I was surprised. I had no idea what to expect. It’s a lovely country. Cape Town for me is one of the most beautiful places in the world. There is so much to do and see. With the new government, now [Jacob] Zuma has gone, I think the country will become an African powerhouse. And the people are happy, hard-working, grateful. 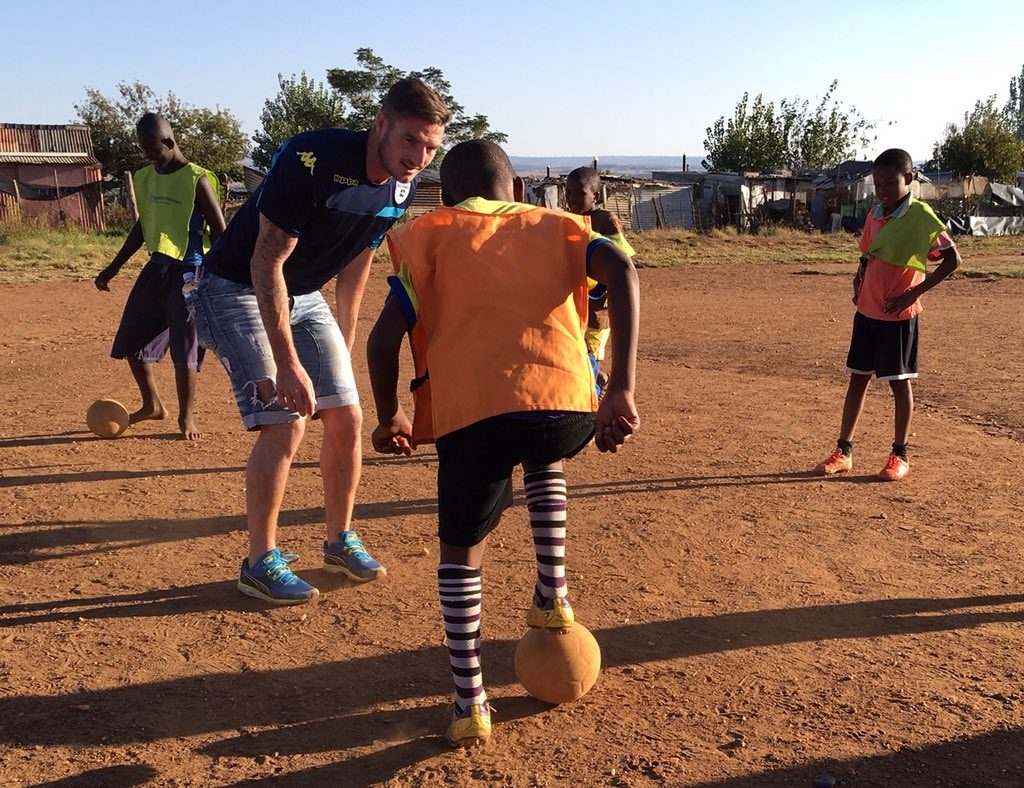 “The football is definitely getting better. The individual quality is incredible, but tactically it’s not so good. There are more foreign coaches here now making an impact. The players are gifted. The problem is that a lot of players here make very good money so they don’t want to go abroad. At the moment, players lack end product: it’s about tricks and entertaining the crowd.”

Keene is now fully accustomed to South Africa’s vibrancy and its idiosyncrasies, although he hasn’t yet got involved in the dancing – at least not with any enthusiasm. “The rhythm they have is a little different to mine,” Keene laughs.

He may not have found his inner dancer, but the striker has shown an altruistic side since moving to Johannesburg, taking part in soccer schools run by Bidvest Wits which allow children from the country’s poor townships to play matches with professional footballers.

“We go there, talk to the kids and play football,” Keene explains. “It gives them hope that they can get out of the townships.”

For Keene, these experiences make everything worthwhile. He opted against pursuing a career in England, making the uncommon choice to move away from the allure of the Premier League. And while he admits he occasionally contemplates what might have been, there are no regrets.

“I’m happy with what I’ve done,” he says. “What football has given me makes me love the game even more. I will for ever owe so much to the sport.”