There aren’t many football careers that change in the mountains of Laos. But that’s exactly where Matt Smith’s profession – and life – took a turn for the better nine years ago.

Smith had been bouncing around non-league after he was released by Portsmouth as a teenager, but after deciding to trade in his football boots for a backpack, the English-born defender’s wanderlust led him to new horizons.

The youngster’s life was at a crossroads and his football career was a long way from the top of his agenda as he explored the natural beauty of South-East Asia.

“A career in professional football wasn’t on my radar at that point,” recalls Smith as he looks back at his life-changing experience in 2007.

“I’d just finished my masters at university and my parents had emigrated to Australia, so my first ambition was to go backpacking for six months, go to Australia and meet up with my family.

“But while I was in Laos, I met my now-wife and carried on travelling with her for another three months. We moved permanently to Australia after that.

“As I settled in, I watched more of the A-League and saw how good the stadiums and fans were. It opened my eyes to a potential opportunity.” 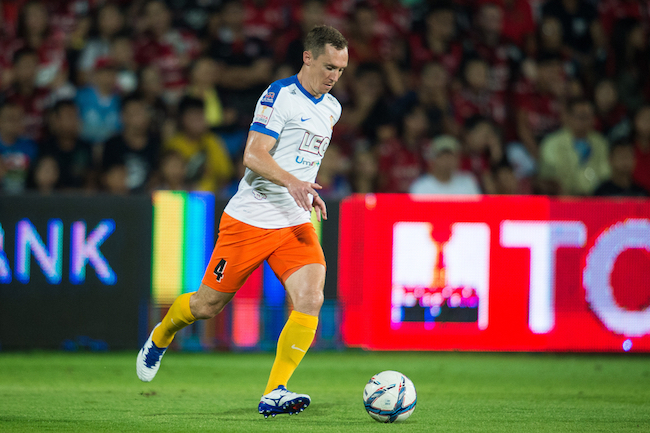 The move Down Under proved to be the catalyst for what was a most unlikely career transformation. Instead of turning out for the likes of Chichester City and Cirencester Town in the lower reaches of the English football pyramid, Smith was now on the road to international honours.

It was a path that would see him rub shoulders with some of football’s biggest stars, swapping his boyhood dream to represent England for the golden strip of the Socceroos after qualifying for an Australian passport.

But after waving farewell to West Sussex, Smith had to wait until the ripe old age of 27 – when he finally became an Aussie resident – to make his professional debut.

“In Australia, you’re only allowed five foreign players in the squad and there aren’t many opportunities if you’re not a big name,” Smith explains.

“I kept involved and got games elsewhere, but until I got an Australian passport, I didn’t have an opportunity in the A-League.

Spells at Palm Beach and Brisbane Strikers served Smith well, so when his chance in the A-League finally arrived, he didn’t waste time making an impact. A strapping centre-back with plenty to prove, Smith was given his big break on loan at North Queensland Fury.

After showing what he was capable of, the late-bloomer was then awarded a permanent deal at Brisbane Roar, making 33 appearances in his first full campaign as a pro and being named in the A-League’s PFA Team of the Year. The following season he was handed the captain’s armband.

It was a startling ascent, which culminated in Smith winning three caps for Australia and lifting a trio of A-League Championships with Roar. Despite the anonymity of his career in England, Smith was now a household name Down Under.

The true mark of Smith’s dramatically changing fortunes became clear as early as his Queensland debut, when he lined up alongside Premier League legend Robbie Fowler.

“Looking back now, it’s strange to think I made my professional debut alongside Fowler,” he says, with an Aussie twang disguising his English roots.

“When I was growing up in England, I watched Fowler play for Liverpool week in, week out, so wearing the same strip as him was quite an experience. I also played against him when he moved to Perth and I was at Brisbane.

“Playing against Alessandro Del Piero, and with him in the Australian All Stars team, was a pretty cool experience too. I’d watched him play in the Champions League and World Cups, so I was in awe. I was very privileged and it’ll be those memories that I’ll be grateful for when I look back at my career.”

Despite lining up with two of his childhood heroes and realising a life’s ambition to make it as a professional footballer, Smith counts leading Roar to his first championship as captain as his biggest achievement.

Even at 34, Smith still isn’t averse to new opportunities. Having completed five glittering years in Brisbane, the centre-back and his family switched continents again two years ago when he joined Bangkok Glass in Thailand.

Living in the heart of the thriving Thai capital, Smith’s thirst for new experiences hasn’t wilted. The tables have turned and now Smith, as one of only two British-born players in the Thai Premier League when he joined, is seen as a bit of a novelty.

He hopes his status as an Australian international will help to make a difference in one of Asia’s emerging football hotbeds. 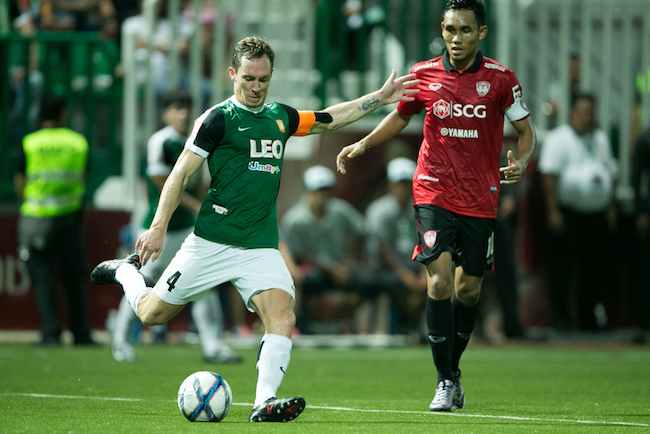 “I like to think I’m playing a part wherever I play,” Smith says from his home in Bangkok. “I wanted to come to Thailand to try a new environment and be a representative for the club on and off the pitch.

“Bangkok Glass have a good vision and foundation, and I feel that I’m adding some value to the club and the league.

“Collectively, the standard of the Thai League isn’t to the standard of the European leagues, but in terms of Asian football, there’s a big growth here. We have some great spectators and clubs, and some very fine players too. It’s an emerging market.”

While Smith’s age might suggest he’s in the twilight of his career, he feels he has plenty more to offer over the next few years. And despite signing a new two-year contract extension in Bangkok at the beginning of 2016, he hasn’t ruled out taking in another new country before retirement.

“I believe I can play for another few years and, with football, you never truly know what’s around the corner,” he adds. “I might have an opportunity to play in another country, but my focus is on Bangkok Glass and I’m enjoying myself here.

“Growing up in England, every kid wants to become a professional footballer but it’s a very intense market to get picked up. England has got some of the best leagues in the world, so I can understand why many players want to stay there and get as far as they can.

“But my passion is football and I’m very fortunate that I have a job I love. So all I want to do at the moment is try to make as many good memories as I can from that.”

It’s that adventurous attitude that opened the door to Smith’s professional career all those years ago in Laos.