June 14th, 2015. Georgetown, Guyana. It is a typically humid evening in the former British colony neighbouring Brazil and submerged in the Amazon rainforest. The monsoon rain is finally subsiding. For Sam Cox, this has been a memorable maiden trip to the country where his grandparents were born.

He has embraced the culture and been humbled by the warmth of the people over the past two weeks. Yet now is the moment he has been waiting for: Cox is about to step into the Providence National Stadium and play for Guyana in a World Cup qualifier. 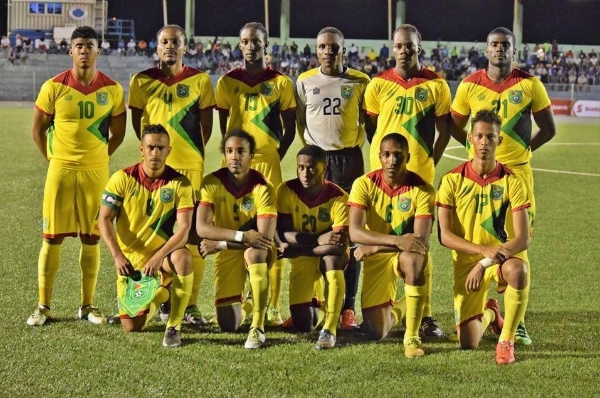 Born in North London, Cox, like most youngsters, always dreamt of one day representing his nation of birth. But instead of England, he would go on to represent the land of his roots, Guyana’s Golden Jaguars.

Cox began his career at Tottenham Hotspur’s youth academy, playing alongside the likes of Steven Caulker, Andros Townsend and Harry Kane. “I came into the academy as a school boy aged 14 and had five unforgettable seasons at the club,” he tells The Set Pieces.

“Against all odds, I managed to earn myself a scholarship and went full time in the 2007/08 season. I was playing in prestigious international tournaments across the world, learning and playing with such talented youth players around me.

“When asked to train with the first team, I was surrounded by some of the best in the world.”

Caught up with a few of my former team mates after training… Proud of how far they've come ❤️?? @RyanMason @HKane pic.twitter.com/zVtYGOqGxh

Unfortunately, things didn’t work out as planned. Despite his early promise and a call up to the first-team squad for a Europa League game in 2009, Cox was released by Tottenham a year later. After a brief spell at Barnet, he joined National League South side Boreham Wood in the summer of 2013.

A successful 2014/15 season saw Cox captain the club to promotion to the National League. But while his teammates set off on their well-earned summer holidays, there was a final chapter awaiting Cox.

“An agent who I was talking to at the start of the 2014/15 season asked me what my heritage was. After I told him, he responded by telling me that he is very good friends with staff at the GFF (Guyana Football Federation).

“They told me if I had a good season there was a chance for a call-up. As it went, that season I achieved promotion to the National League with Boreham Wood as club captain.

“Shortly following that, I received a phone call from Guyana’s manager Jamaal Shabazz, who informed me that I had been called up to the national team for the forthcoming World Cup Qualifiers against St. Vincent & The Grenadines in June 2015. When I heard the news, I was buzzing.”

Already looking forward to the semi final round!… Alone we are strong… together we are stronger ?????❤️ pic.twitter.com/aVGnYPZDWq

Guyana is a peculiar country. Geographically located in South America, it is the only English-speaking nation on the continent. For that reason it is normally categorised as a Caribbean country due to its cultural similarities to the nearby islands.

The locals, mainly of Indian, African, Chinese and Portuguese origin, speak Patois. Soca music dominates the airwaves. Cricket is the leading sport, with the football team using the national cricket stadium to play their matches.

Rather than being a member of South America’s CONMEBOL federation, Guyana is a member of CONCACAF, playing against Caribbean and North American opponents despite their geographical proximity to the likes of Brazil and Venezuela.

For all its relative mystery, Guyana has had a small but significant cultural impact in England. Eddy Grant, singer of 1980s hit Electric Avenue, was born in the former British colony, while Channel 4 show Desmond’s, which was set in the London district of Peckham, featured a cast of mainly Guyanese immigrants.

The national team, like many countries in the modern game, has begun to tap into its diaspora in search of success on the global stage. In 2011 they recruited former Premier League players Carl and Leon Cort and went further than ever before in the qualifying campaign for the World Cup in Brazil.

Fast forward to the 2018 qualifying campaign and a new recruitment drive has begun. Matthew Briggs, who holds the record for being the youngest ever Premier League player, making his debut for Fulham aged 16 in 2007, was handed his first call-up along with Neil Danns, previously of Crystal Palace and Leicester City.

Including Cox, the trio had never been to Guyana before, but were bonded by heritage.

Jamaal Shabazz, who began his third stint as Guyana manager in February 2015, was impressed by what Cox had to offer.

“I was first alerted to Sam via a member of my staff who had seen him play in England. At the time the squad was saturated with holding midfielders but when I heard he could play as a wing-back it peaked my interest,” Shabazz told The Set Pieces.

“In initial discussions he was very eager and this impressed me.”

In May 2015, Cox boarded a plane and travelled over four thousand miles from London to Guyana.

“What struck me first was the heat. I’d never felt heat like it before. The first thing that came into my mind was, ‘How am I going to play football in this?’

“I remember my first training session with the squad. We were doing a basic passing drill and the sweat was just dripping off me. After ten days in camp it became easier.”

Although it was his first visit, Guyana did not feel like a foreign land to Cox.

“Straight away I felt a connection to the country. The people were so friendly and welcoming to me and the food was like my nan’s. I made some great friends within the training camp who were always helpful to me adapting to my surroundings.

“It was nice as well to have a few England-based players in the camp who were also in the same boat as me.

“They all made me feel very welcome and soon enough I started to get to know the local based players and got to know their stories. We all became like brothers on a mission.”

But not everything went smoothly. Cox was unable to secure a Guyanese passport in time for a 2-2 draw in the first leg of the qualifier against St. Vincent & The Grenadines. Instead he made his debut in the crucial second leg at home in Guyana.

“Because of the frustration of missing the first leg, it added to the excitement of finally representing my country.

“When we got to stadium, it was a great atmosphere. The fans really got behind us. The atmosphere is a lot more vibrant than England. There was Bob Marley and other songs playing during the game and all sorts of instruments and noises coming from the crowd. I loved it.

“The game itself was very high intensity. The tempo was very fast and the players were a lot more athletic. Maybe not as technical as European players, but there was still some great quality on show from both teams.

“In the heat of Guyana it is very hard to sustain a high level of performance throughout the 90 minutes so whenever you had the chance to rest on the pitch and take water breaks you made sure you did it.”

Cox had a great game, playing at right-back and claiming two assists on his way to being named man of the match. It was to end in heartbreak for Guyana though, as a 4-4 draw meant they were eliminated on away goals.

Remaining committed to the cause, Cox returned to the country this year to play in 2017 Caribbean Cup qualifiers. In June he was appointed captain.

“To be captain of my nation is a huge honour and a role I take huge pride in. My first game as captain was against Curacao, who were managed by Dutch footballing legend, and one of my childhood heroes, Patrick Kluivert.

“After the game he told me that I did a great job as captain and even sent me a message on social media.”

Shabazz believes his decision to reward Cox has been justified: “Cox was an obvious choice (to be captain) despite being new to the program. He is a model professional who has a future in the game in playing, coaching and management.”

For Cox, it has been a life-changing adventure, and being captain is a source of endless pride.

“I want to represent the people of Guyana and make my family proud. I want to be a great ambassador for the national team and to help Guyanese football move to the next level.”

Now playing for Wealdstone in the National League South, Cox will travel to Jamaica in October to lead Guyana against Caribbean powerhouse Jamaica, themselves captained by Leicester’s Wes Morgan.

Still aged only 25, Cox sees himself playing a long-term role in developing football in Guyana. His journey with the Golden Jaguars is only just beginning.