All it took was 27 hours. After a two-year hiatus from the game, Dan Harris knew that he’d found the perfect next step for his career. The only hitch, the job was in Seoul – 5,300 miles away from his family home in Scotland.

The former Celtic and West Brom coach had been invited over to the South Korean capital for a VIP weekend to meet a group of execs who were putting together a dream team for a new K-League franchise called Seoul E-Land. And he wanted to be part of it.

Harris had enjoyed success as a coach for several top clubs across the UK, so was used to moving around for work. But he admits that broaching the subject of jetting his family off to Asia wasn’t easy.

“It’s a tough sell,” recalls Harris. “When I sat down and spoke to my wife, we had to find South Korea on the map first. She was really supportive and we decided it was the right thing to do with the family.

“I’d been out to meet the chief executive and the other directors. I had 27 hours in Seoul and we packed a lot in. In that time, I got a chance to find out what the club was about. We thought, why not go to a whole new culture and give it a try? We’re still here two years later.” 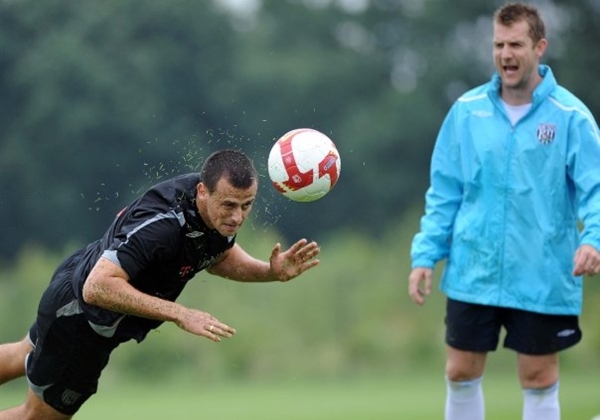 Arriving as the fledging club’s number-two in 2014, Harris remit was to support another Brit – Scottish boss Martin Rennie – as they tried to create a new side from scratch in the heart of one of the world’s most thriving and colourful cities.

It was a challenge that most established Premier League coaches wouldn’t have considered. Yet Harris couldn’t wait to add a new and exciting chapter to his CV.

After leaving Celtic in 2011 following spells working under Tony Mowbray and Neil Lennon, the North Londoner had turned down attractive jobs south of the border to take stock and work out what he wanted to do next. And in a precursor to what came next, that meant travelling abroad.

“I went off and did some qualifications while I waited for the right opportunity,” Harris says. “I took the chance to travel around the world to watch other people and different sports – taking in some other cultures. It allowed me to take stock a bit.

“We’re all very fortunate to be in a magnificent country that has a great love for football, but the nature of it means that we can get a bit insular or lazy by thinking that because we’re the most popular football nation in the world, we’ve got everything sorted. It’s great but I wanted to go off and learn about other sports, people and nations.”

All roads led to South Korea and although manager Rennie has since moved back to the US where he enjoyed so much success before going to Seoul, Harris was keen to carry on and continue his education – working under new boss Park Kun-Ha. 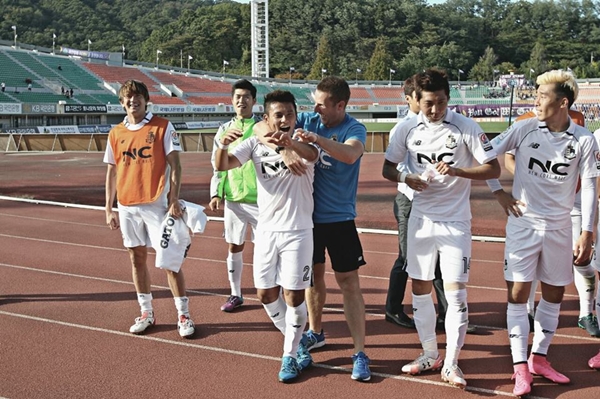 It’s been an eye-opening experience, both on and off the pitch. While the language barriers and different attitudes have provided Harris with a valuable insight into the differences between European football and the world game, living in Seoul has put some British creature comforts into perspective.

“Seoul is a huge place and is relentless in terms of the pace of life,” explains Harris.

“The city is vibrant but is still an active war zone, so there are apache gunships flying over you and regular missile warnings going off. There is also a huge American military presence, but you become a bit blasé to it after a while.

“From a football side, the biggest difference between South Korea and Britain is players’ lack of confidence. Over here, there is such humility and a respectful nature that really holds the guys back from expressing themselves.

“In the UK, we all know players who go into dressing rooms with all the gear and no idea. But that swagger and belief in themselves can get those players through – there isn’t that sort of thing over here.”

The K-League is still in its formative years after being set up in 1983 – the same year that the English Football League celebrated its 95th birthday – and received a welcome booster shot when the World Cup came to South Korea and Japan in 2002.

But after years of growth, South Korea’s professional leagues now face one of their biggest challenges to keep the trend going with spending power of Chinese football clubs making that the premier destination in Asian football.

Harris says this growth just an hour’s flight away could damage the progress in South Korea – although he says the biggest challenge starts with the fans.

“Most Korean fans’ first teams are Premier League clubs. There are lots of Spurs and Swansea fans at the moment as they have Korean players,” Harris says.

“The challenge is for fans to have a Korean team first and an English team second. The quality is really good over here and having spoken to a few of my contacts in Europe, there’s no doubt that some of the top players here could make it over there.

“The players in South Korea already do all the things that we’re looking to develop in England, so it’s a good standard. Players will run all day, and the mentality is to work hard and be keen to learn – although a lack of explosiveness and creativity needs to develop.” 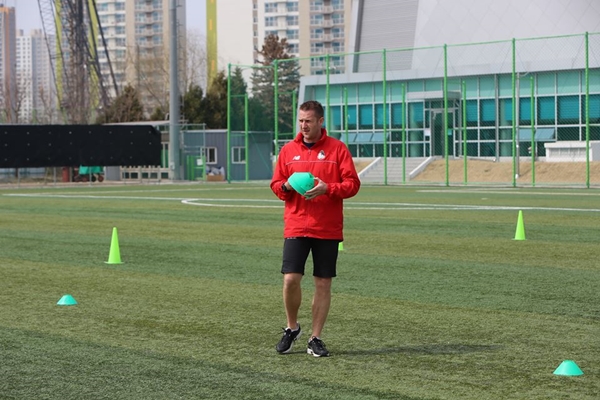 So after broadening his knowledge in the K-League and perfecting his role as a number two, could Harris see himself taking a top job in another country further down the line?

“I’m happy where I am at the moment,” he answers. “I’ve seen some good number twos who have been real assets to their club and have put grunt work in behind the scenes. It’s the old cliché of having Captain Kirk on the bridge and Scotty down the engine room. I’m enjoying being in the engine room at the moment.

“There are big benefits of working abroad as a man and a coach. In the 18 months I’ve been here, I’m a million times better than then when I came. It forces you to look at things in a totally different way – being in South Korea has taught me about communication, which will help wherever I go in the future.

“I’m not canvassing for other jobs and I’m settled here, but I am ambitious. I came into this to be the very best I could be. So, who knows where I could go next?”

While he’s settled in South Korea for now, perhaps it won’t be too long before Harris and his wife are getting their map out once again.