In a country where sports such as boxing and basketball have long taken precedence over football, the transformation of the Philippines national side over the last decade or so has been enormous. With an influx of overseas players of Filipino heritage, and the further development of the sport at grassroots level, the Azkals – or street dogs, as the national side are affectionately known – have risen to become Southeast Asia’s highest-placed side in the FIFA rankings.

Chad Gould was born in the Philippines but grew up in England, playing for the youth academies at AFC Bournemouth and Southampton. With a professional deal not forthcoming, he opted to study sports science at Brunel University. But following his graduation Gould’s career in football took a turn in a new direction. This is his story…

“My dad was a massive football fan and he told me that the Philippines had a national team and that I should give it a go. He managed to get in touch with the manager at the time, Aris Caslib, and I was invited over for a week trial. There were more than 100 players at this training camp, which was in preparation for the 2004 Tiger Cup (the Southeast Asian Championship). I did well, and ended up staying with the team for months.”

“I had no doubts about going out to the Philippines when given the opportunity. My thoughts were of adventure and experiencing a new culture. I was born in Cebu City so I was excited to go back to my homeland as an adult. At that time Chris Greatwich and I were the only players who came from outside of the Philippines, and we struggled with the facilities at first. Growing up playing for Bournemouth and then Southampton I felt spoilt. There was very little funding in the PFF (Philippines Football Federation) at the time so we had to make do. 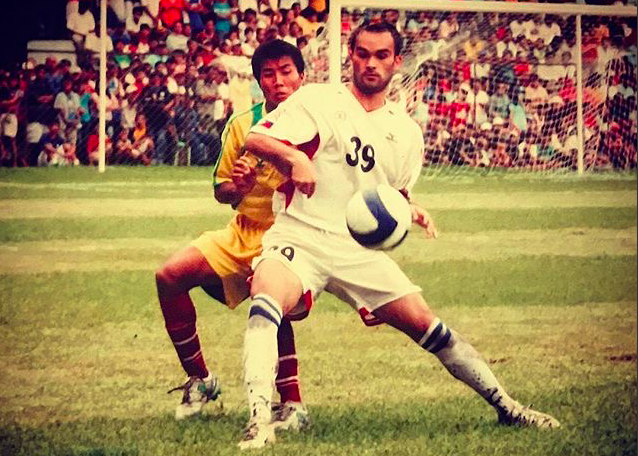 We were travelling to and from the training ground in the back of a jeepney (a cross between a jeep and a bus that’s a very common sight on Philippine roads) on dirt tracks for an hour. We’d get out after the journey like we’d all been beaten up as it was such a bumpy ride. I remember on one occasion it started raining, but the jeepney didn’t have any windscreen wipers so one of the helpers was reaching around outside trying to rub the driver’s side of the windscreen with his hands. We also travelled around the different islands by ferry as the PFF couldn’t afford flights. We would often sleep in bunk beds in the back of the ships – in the areas where livestock was being transported. But things like that really brought us together as a group, it was a great bonding experience.

My first competitive international was in the 100,000-seater national stadium in Kuala Lumpur. We were losing four-nil against Malaysia and in the 90th minute the manager let me come off the bench to get my first taste. I was over the moon to get on the pitch, and in the 93rd minute I scored. It was a surreal moment watching their equivalent of Match Of The Day that night with all the pundits talking about me and asking ‘Where has this guy come from?’. Before that tournament the team had regularly been losing by double figures, but the new generation of players knew that the tide was changing for the country.

2004 to 2005 was really the birth of the Azkals. The 2005 Southeast Asian Games were held in Bacolod in the Philippines, and that’s when Phil and James Younghusband, who were at Chelsea at the time, joined the team. The fans were incredible, it was akin to Beatlemania. ‘Azkals fever’ was something to experience. I’m proud to be part of that movement in Philippines football. It’s incredible to think there was no professional league in the country at the time.

I remember coming out of the changing rooms and being escorted by police to the team coach. The fans were going crazy outside and the police had to form a human wall to hold them back. Once we were in the coach they started rocking it, wanting to catch a glimpse of us. The hysteria boiled over when one of the lads threw his underwear out the window for a laugh – the fans went absolutely bonkers! The police came on board and made us close the curtains so the crowd would calm down, and we could eventually get away back to the hotel. 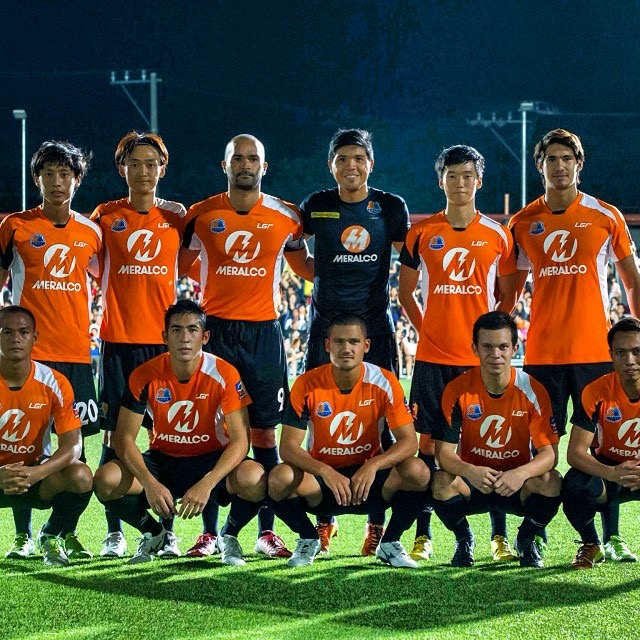 After taking a year away from football to pursue his other passion, music, and signing a record deal back in England, Gould returned to the Azkals fold in 2007.

“There was another tournament in the Philippines (the qualifiers for the 2008 AFC Challenge Cup) which was great. That was a special moment for me because it was the first time that my parents had watched me play live for my country. Against Bhutan I scored from a James Younghusband corner, and I ran straight to my mum and dad in the crowd and blew them a kiss which is a priceless memory.

Further qualifying tournaments in Cambodia and the Maldives followed for the Azkals, and Gould added to his international goal tally in both. Back in the UK, meanwhile, he had been on the books of AFC Wimbledon, before being discovered playing Beach Soccer in a tournament organised by Nuts magazine, which led to him being selected for the England national Beach Soccer team.

“In 2010 I was away with the team in Portugal. I remember that day as I had just scored a goal against France in front of one of my childhood heroes Eric Cantona, who was the French manager at the time. I received a message from the new Philippines manager asking me if I would be available for the upcoming Suzuki Cup. Naturally I agreed, and I said that I would be in touch again when I got back to the UK. I was then completely ignored, which I found very strange. As you can imagine I wasn’t best pleased. The team went on to reach the semi-finals for the first time which was great for all my friends in the team but a very bittersweet moment for me. 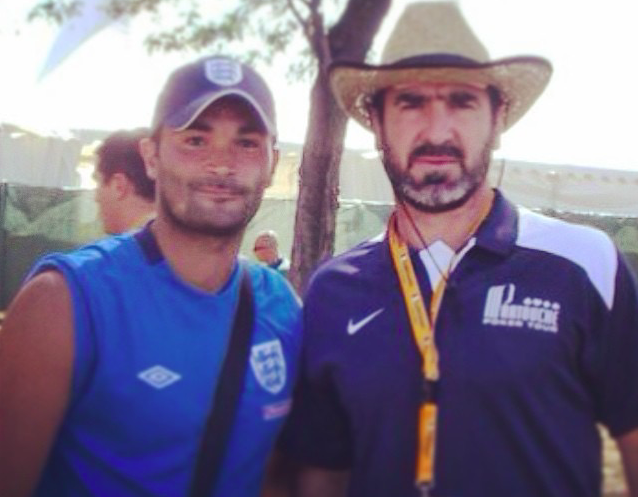 “It would be another year until I was back with the national team. Another new manager and a new start. Or so I thought. We were training for a match against David Beckham’s LA Galaxy and I was the fittest I had ever been, and playing well. But unfortunately fate stepped in and I got a leg infection that would leave me needing surgery and watching the match from the sidelines.

Gould’s international career had come to an end, but that didn’t mean he would no longer be playing in the Philippines. The rise to prominence of the Azkals had seen a new professional league, the UFL, established in the country, and in 2012, after convincing his girlfriend to move out to Manila full time, Gould joined Phil and James Younghusband at the Loyola Meralco Sparks.

“I was excited to get stuck in again, and to experience living in another country for the first time. Loyola Meralco Sparks was a big club, but they hadn’t won any silverware. We won the UFL Cup in 2013 which is arguably the biggest trophy, because Filipinos seem to prefer watching cup games. The biggest crowds would always be there for the cup. James, Phil and I all scored in the final which we won 3-2.

But the most daunting experience was when we played in the Menpora Cup in Indonesia against Arema. They have one of the biggest fan bases in Asia. We had rocks thrown at our coach all the way from the hotel to the stadium. We entered the stadium to boos and there were loads of flares and intimidating banners in the crowd. A strange thought crossed my mind that the sport I began playing in parks in England had taken me to a place like this. We lost that game one-nil but we came out of that tournament having earned a lot of respect, and it boosted the profile of the UFL. 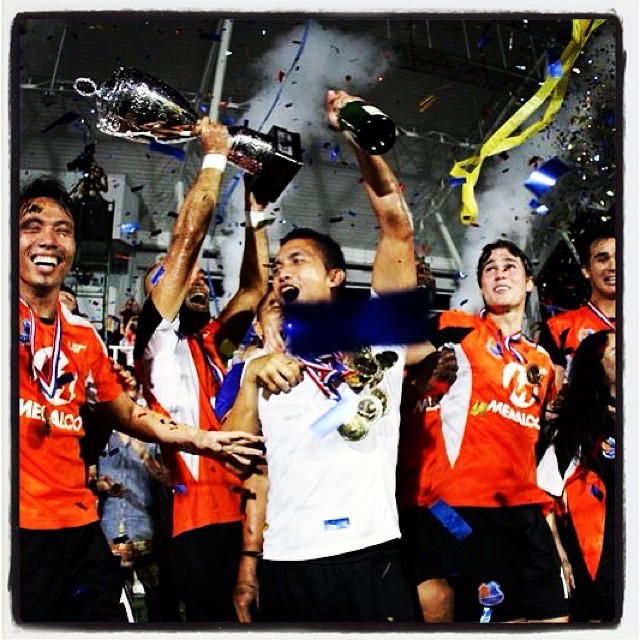 After two seasons with Loyola, Gould left the Philippines, but a new opportunity seemed to be just around the corner.

“Malaysia was my biggest regret. After a great trial with Perak FA I was offered a fantastic contract verbally. I wanted to accept it but I was convinced to go to Terengganu FA for another trial before signing, as they were a better club and Perak looked like they were going to be relegated from the Super League.

With hindsight I would’ve just stayed and signed for them, but I flew out to the east coast to Terengganu. They didn’t offer me a contract, and through the grapevine Perak found out I’d travelled there without their permission and they took their offer off the table. Despite the way it turned out, I got to travel to another beautiful country and live another wonderful experience.

My last flutter with pro football was in Bahrain. Manama is a vibrant city and the football facilities are first class. I was out there on and off for a year, but at the last minute the manager who wanted to sign me got given a job as an assistant manager for a Championship club back in England. All footballers will know that it doesn’t matter how good you are, some managers will like you and others won’t.

Now that it’s looking likely that my playing days are over I have started up my own private soccer school in central London. I have gained so much knowledge over my career and I’m really passionate to pass it on to the next generation of footballers. I am taking inspiration from beach soccer too, with its carnival atmosphere. Football should be fun and that’s how I am going to coach it.

I hope with the experience I have gained in professional and international football, my sports science degree and my coaching badges, I will be able to become the coach that I always craved both as a kid and as an adult. Football is like a living organism and you have to adapt as it changes. I am super excited about the Chad Gould Soccer School and my first project will be with a private school in Mayfair. The ball is rolling.