The recent Premier League season was the first in the latest three-year broadcasting deal. A total of £8.3bn will be spent on television rights over the next three years, £5.14bn of which will come from two domestic broadcasters, Sky and BT. For clubs, the 71% increase on the previous deal is welcome news, as the clear majority of this sum finds its way to teams competing in the league – though a small portion of it covers running costs and supports the FA, PFA, various youth development projects and grassroots football.

Many supporters have also welcomed the increases. Their clubs have larger sums to spend on players, and the beginning of a levelling-off effect is being seen within the league, as the significant rise in broadcasting income helps smaller teams to attract a broader range of talent. Additionally, clubs are less reliant on matchday income, and as such, there’s new hope for a more progressive attitude towards ticket pricing; a £30 cap has already been instituted on seats for away fans.

As usual, where there is commercial progress there is a cost to bear; that cost tends to eventually find the consumer. Or as we call them in football, the ‘supporter’.

While personal broadcasting subscription costs have increased, the increases aren’t significant, with Sky’s TV (including standard definition sports and BT), line rental and basic broadband package priced at £78 per month. Yet, there is another avenue of sales which has seen more significant increases in recent years, namely licensing sales to commercial properties.

In order to obtain the right to show live football in a commercial venue, such as a pub, the cost is much greater. An upcoming report on the value of football in pubs, produced by pub-finder app MatchPint and market measurement consultancy CGA Strategy estimates the average charge to pubs and bars showing both Sky and BT sports to be around £20,000 per year.

Sky and BT base their fees on the rateable value of each individual pub, a value determined by a government’s Valuation Office Agency based on the size of the venue, the wealth of the area, and various other factors (a larger property in a richer area will have a higher RV than a small property in a rural area).

This means that the cost of showing the Premier League in a large venue in Central London will be theoretically significantly greater than a small, rural pub. The report also shows that the cost to pubs has risen in the last year as Sky and BT both upped their prices following the latest TV deal by 10% and 8.9% respectively (compared to the UK’s current inflation rate of 0.05%, this is a considerable increase).

Although the report suggests that, on average, pubs and bars showing the Premier League increase their wet sales by £34,000 per year, the margins are often tight and there are many struggling to pay the high costs. For example, the Old Red Lion Theatre Pub, a medium-sized venue with an EC London postcode and a part tie with Punch Taverns, is charged £26,114 (including VAT) per year to show Sky and BT Sport. With 168 games available to show throughout the season, the cost to the pub of individual games shown on Sky breaks down at £148 per game, and £178.50 per game on BT Sport.

If an average pint costs £4.50, you might think that selling 32 pints means the pub breaks even, but the net profit on drinks is significantly lower. The Old Red Lion calculates that to break even, they must sell 88 pints per game. This could happen several times a year during the bigger clashes, but a standard Saturday lunchtime game is very unlikely to accrue this level of sales. Additionally, pubs with ties to a pub company (such as Punch Taverns) are obliged to buy their beer through that company, often at a much higher cost than the market value, shrinking the net profit on a pint and further squeezing the landlord. 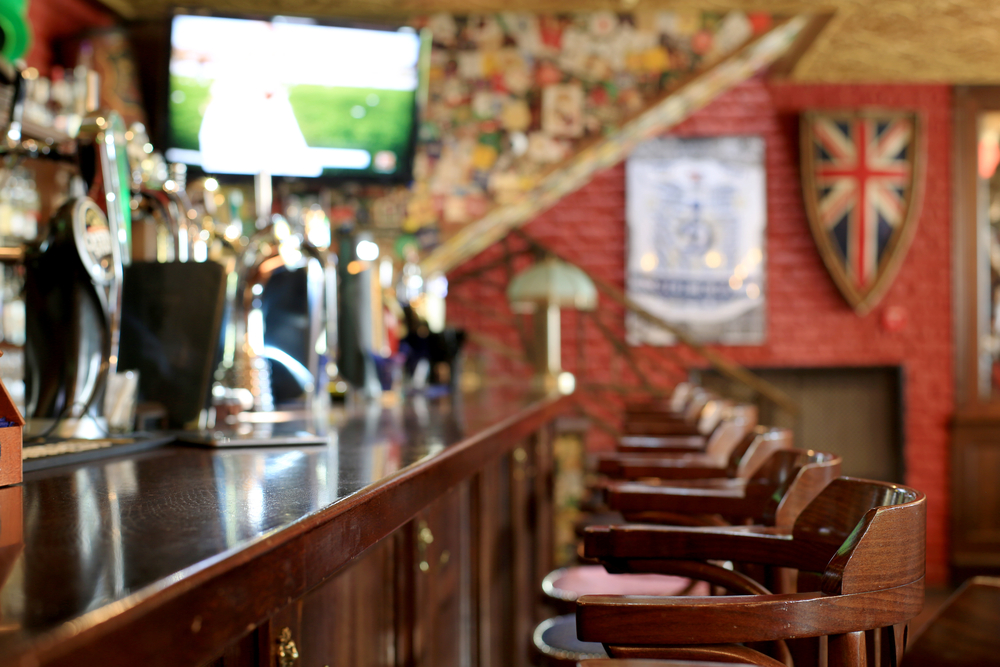 Perhaps the most ignominious aspect of the recent price hikes came in 2013, when BT first entered the scene. In 2012, the Old Red Lion was paying £1,594.81 per month for Sky. The following year, when BT’s successful bid saw them take 38 games a year from Sky, the pub’s sky bill dropped by just £50 per month yet they were forced to pay an additional £600 per month to BT, just to show games they were already showing the previous year. For certain pubs, these cost increases are totally unsustainable.

Chris Roach, landlord of the White Lion Inn in Solihull – a small, rural pub – is charged £12,036 per year. Chris describes the viewing area in his one standard-screen pub as having a maximum capacity of 30 people. Yet, due to the pub being in an affluent area, the rateable value of his property is high, hence the unfairly high fees. As Chris says: “A Wetherspoons within five miles has 18 screens and holds 400 people. Guess what? They pay the same rates.”

The Woodman Inn in Witney – a similarly small pub in a rural area – pays around £10,000 per year, with 38 seats in the viewing area. The landlord, Mark Fiddler, said that he cancelled his contracts at the end of last season in the hopes of renegotiating a better deal. The broadcasters were unmoved, and Mark describes their attitude as indifferent to his plea: “[Sky and BT] don’t care about the small, rural, village pub. I am lucky if we take £2,500 a week in this pub and, with Punch Taverns taking their share, there is nothing left to keep the pub open.”

With the focus of their sales on personal broadband, phone and TV packages, it’s arguable that Sky aren’t particularly interested in reducing the cost to pubs. Where’s the benefit in giving supporters the option of crowding together to watch their football team, when each individual might command a home package, complete with internet and a landline? In 1996, Rupert Murdoch admitted that “live sport is the battering ram to get pay-for-TV into people’s homes.” He didn’t mention pubs.

Of course, Sky would profess that they would not encourage any pub unable to afford the cost to take the package, but their various optional discounts suggest something slightly different. Selling food, creating an outdoor sports area, and operating a pub in a less densely populated area can qualify businesses for a discount on their package, but the biggest discount comes in the form of a partnered distributor. Pubs can save up to 33% on their total fee by stocking Molson Coors products, although receiving the discount is dependent on hitting a sales quota.

A publican might then find themselves in a position in which the only way they can afford Sky is by trying to sell products they didn’t want in the first place. Chris Roach of the White Lion Inn is one such publican: “I receive a discount of £3611 plus VAT, as I have sold my soul to Molson Coors via Carling to guarantee a certain barrage of their products.”

The danger with this sort of discount would become apparent if and when Sky decide to deal with another distributor in future years. Forced to sell a certain amount of the product each month to qualify for the discount, publicans must ensure that their customers are drinking Molson Coors’ products. If Sky decide to shift distributors for a better deal in a year’s time, those publicans must too make the switch, abandoning the drinks they’ve spent a year encouraging their customers to buy. In a local’s eyes, there’s no crime worse than dispensing with their usual drink.

If the present is dim, the future’s darker; broadcasters are currently dealing with a sizeable decline in viewing figures this season. Sky’s early Premier League season ratings are down by a fifth, and BT’s Champions League ratings have dipped by as much as 40% on certain days. If the cost of football to pubs can be unsustainable, then the cost to Sky and BT of rapidly inflating broadcasting deals could quickly follow suit. Similarly, in the United States, ESPN recorded their largest ever subscriber loss in October 2016, with over 600,000 customers cancelling their subscriptions.

With Sky paying £11.07m per game, compared to BT’s £7.6m, the company have potentially overpaid for their share, allegedly panicked that BT might outbid them. 20 years after Murdoch’s comments, it might not be a stretch to suggest that live sport remains the battering ram. Were Sky to lose the rights to the Premier League, a sizeable drop in customers might be expected. Data shows that in Hong Kong last year, when Premier League rights shifted from one broadcaster to another, customers tended to follow the football, and the share prices of the broadcaster that lost the rights plummeted. In fear of a similar fate, Sky could continue to bid, pushing the increasing costs onto the consumer, and in particular, pubs.

The Premier League is shown in 212 territories, in 643 million homes, with a potential audience of 4.7 billion people. £8.2bn will be paid to the Premier League over the next three years. Manchester United recently became the first English club to record annual revenue of over £500m, and Paul Pogba became the world’s most expensive footballer last summer, with a transfer fee of £89m. Your local pub might be struggling with the cost of all that.

This article first appeared on Football365.com.