From over 100 players, we’re down to the final four, but where’s the caution? It’s out of the window, that’s where it is. Yet again, defending is an afterthought with nine goals scored in two games. What’s wrong with you people? Semi finals are supposed to be tense! Do you not know that there’s a place in the final at stake? 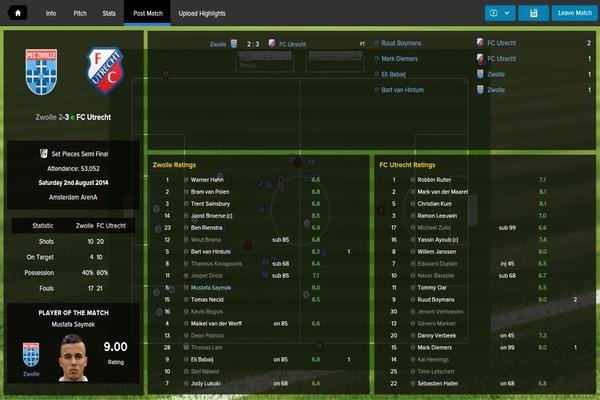 This all Dutch affair was one for the history books, with Nicholas Dutton and PEC Zwolle taking on newly adopted Utrechtian, Joe Krishnan. 53,052 people were in attendance at the Amsterdam ArenA, and they were not to be disappointed. The match was dominated by Utrecht, as they fired 10 shots on target compared to Zwolle’s four, not to mention claiming a mammoth 60% possession. But as this tournament has shown us before, statistics can mean very little.

Utrecht, one of the surprise packages of the competition, had gone into the game in superb form, scoring 12 goals in just three games. Asked if he could deal with the pressure of guiding his team to the final, manager Krishnan shrugged and said: “If you can’t deal with pressure in football, you’re in the wrong business.” Ominous words from the boss. Dutton meanwhile, remained confident his side could cause an upset yet again, with his side knocking out the much-fancied Odense BK in the quarter-finals.

Much had been said about Utrecht’s ability to score goals but it was Zwolle who secured the early advantage, with Bart van Hintum curling a beautifully struck effort into the top corner to give them the lead after seven minutes. Utrecht struggled to get going despite Krishnan’s attempts to encourage from the sidelines, and things soon went from bad to worse when leading scorer and star player Edouard Duplan was forced off through injury just before half-time. With a lack of wide options on the bench, Krishnan sent on young winger Danny Verbeek as his replacement. No pressure, kid.

Seemingly up against it, Utrecht were level a minute later. Playmaker Willem Janssen slid a neat pass through to Ruud Boymans, and the towering striker shrugged off the challenge of Joost Broerse to finish with aplomb. The relief on Krishnan’s face was certainly evident. Dutton tinkered at the interval in a bid to revive his deflated men but Utrecht came out of the blocks quickly and should’ve been in front. Janssen was twice denied by the impressive Warner Hahn, before Tommy Oar sent his effort sailing over the bar.

With neither side able to create anything of note in the final third, the game went to extra-time. Dutton had sent on Eli Babalj for Jesper Drost in normal time and his tactical gamble soon paid off, with Babalj getting ahead of his marker to finish from close range after some good work from Man of the Match Mustafa Saymak.

The lead would be short-lived because just three minutes later, Utrecht clawed their way back again. Substitute Mark Diemers received the ball on the edge of the area from Janssen and the midfielder unleashed a sensational effort from 25 yards, leaving Hahn rooted to the spot. Krishnan punched the air with delight, recognising the momentum had perhaps swung in his favour.

Utrecht were in the front foot and with just eight minutes to go, Boymans picked up the ball on the edge of the area and curled his effort past Hahn with help from the post, prompting chaotic scenes as the 50,000-strong crowd went into overdrive. Despite their best efforts, Zwolle struggled to fashion another opening and as the final whistle sounded, the Utrecht bench celebrated with abandon, but not Krishnan, who immediately went over to console his opposite number Dutton on the touchline. A classy touch. The two managers shook hands, acknowledging the fascinating spectacle they had just witnessed, but for Utrecht’s supporters, they could sense that this might be their year after all. Highlights can be seen below. 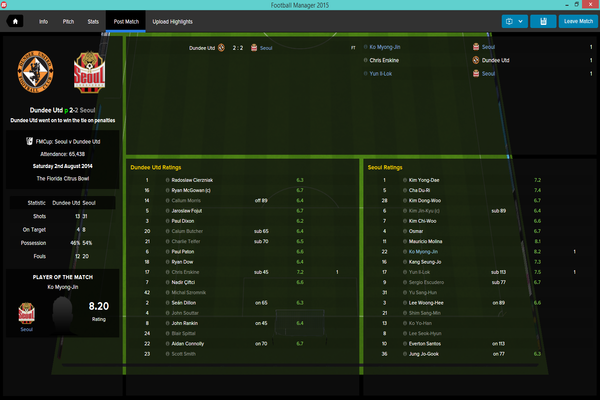 In another thrilling semi final, Jake Seviour in charge of Dundee United locked horns with Steve Mogan and FC Seoul. With 65,000 in attendance at the Florida Citrus Bowl, the match went the distance, needing a penalty shoot to separate the two sides. After taking an incredible 31 shots, the Koreans will exit the competition thinking how on earth they did not progress. Dundee United, to their credit, have bewildered everyone here at The Set Pieces to make a final that nobody gave them any chance of making a few weeks ago. How quickly things can change in football… manager.

Despite credible performances from Mauricio Molina, Cha Du-Ri and Kang Seung-Jo for FC Seoul, the men in orange were a strong and cohesive unit over 120 minutes making themselves extremely difficult to break down. As you can see, they rode their luck as well by allowing eight shots on their goal out of a possible 31, as well as conceding the lion’s share of possession throughout. Their tactics were evident from the first minute. But it worked and that’s the key.

Stay tuned for news of a dramatic final and the answer to the question we’ve all been asking this summer: Just where is that magnificent trophy going to end up?