It was Derek Thompson, manager of Heaton Stannington FC. Thompson had just got off the phone to Nobby Solano’s agent, who had asked if the club could help out some friends of his.

“Derek just said, ‘Gabon, the Olympic team are here, for the Olympics,”’ says Geoff, who was Thompson’s assistant at Heaton Stannington. “They’ve been looking for a warm-up game.”

Newcastle United were busy, and their Under-21 team were away. Heaton Stan were next on the list. With Geoff on board, Derek then phoned captain, centre-back and junior tennis coach Joe Wear. Joe was resting up at home when he got the call.

“It was a bit random, really,” Joe recalls. “It was literally the night before.”

Joe was preparing to run the Great North 10k the following morning, so at first he was reluctant. But Derek explained the situation.

“They’re playing in the Olympics at St James’ Park and they want a friendly.”

“We didn’t have our best team, to be honest,” says Geoff when we meet in Grounsell Park’s brick changing rooms before Heaton Stan’s game against Blyth Town.

That season, the team had faced the likes of Ashington Colliers, Ponteland United and Harraby Catholic Club on the way to winning the Pin Point Recruitment Northern Alliance League Premier Division. But suddenly Geoff had to pull together a team of factory workers, lawyers and block paving-layers – some of them quietly hungover from the previous evening – to play Gabon.

“Your classic non-league team – a mixture of all sorts,” says Joe.

Heaton stann before our pre season friendly with the Gabon Olympic team pic.twitter.com/NtpSQ5tou4

Football was one of the five sports Gabon entered at the 2012 Olympics. Their squad included a 23-year-old Pierre-Emerick Aubameyang, who had just banged in 16 goals for Saint-Étienne in the French top flight. A year later, the striker would join Borussia Dortmund for €13 million, scoring 120 goals in his first four seasons at the club.

Around 24 hours after Derek had first called Geoff to raise the idea, he and the rest of the team climbed off the minibus at Grounsell Park, hidden behind an ATS garage, a chippy and a Chinese takeaway in this small suburb of Newcastle.

A shout on the club’s Facebook and Twitter pages, along with Non-League forums, meant that some 400 fans had gathered at the ground, standing under the corrugated plastic roof over the main concrete terrace.

Grounsell Park has been the Stan’s home since 1935 and, while you wouldn’t know it was built on top of a disused quarry at first glance, it isn’t what you would call IAAF-approved either. After a quick look around, though, the Gabon team were happy and the game was on.

Well, nearly. Geoff got word from one of the Gabon team that their talisman, Aubameyang, had a bit of a problem. He had left his boots at the Hilton Hotel in Gateshead, on the other side of the Tyne. So Geoff, Aubameyang, a Gabon security guard and one of the coaches piled into his car as they set off across the city, over the Tyne Bridge, into the hotel and back again.

As Geoff was chatting to the coach on the way back, he could hear some concerned muttering in the back of the car. “We were heading back over the Tyne Bridge and they were talking away in French. The security guy goes, ‘Can we go back?’ They had match balls they wanted to use that were the same balls they were going to use in the Olympics…so we had to go back again!”

Finally, they were all ready. Geoff set up his team in the 4-4-2 formation that had served them well that season, with Joe handed the task of marking Aubameyang. “I was a little bit tired from the 10k,” says Joe. “But it wasn’t an opportunity I was going to miss.”

Did he have a specific plan to stop him? “Hmmm. Er… no. We knew they were going to be a really good team, so it was just go out there, work hard, try your best and make it competitive. I think we lost 4-0.”

“To be honest, I didn’t think we did that bad,” Joe continues. “You could tell Aubameyang was very quick and sharp, and I’m honestly not sure if he was putting 100% effort in. He was just a different level.”

“We held our own for a while, but obviously he was the massive difference,” adds Geoff. “The pace on him was absolutely electric. It’s funny, I keep saying to everyone, he doesn’t seem to be moving full pelt but he just sort of glides across the pitch, you know what I mean? You could tell he was a player.” 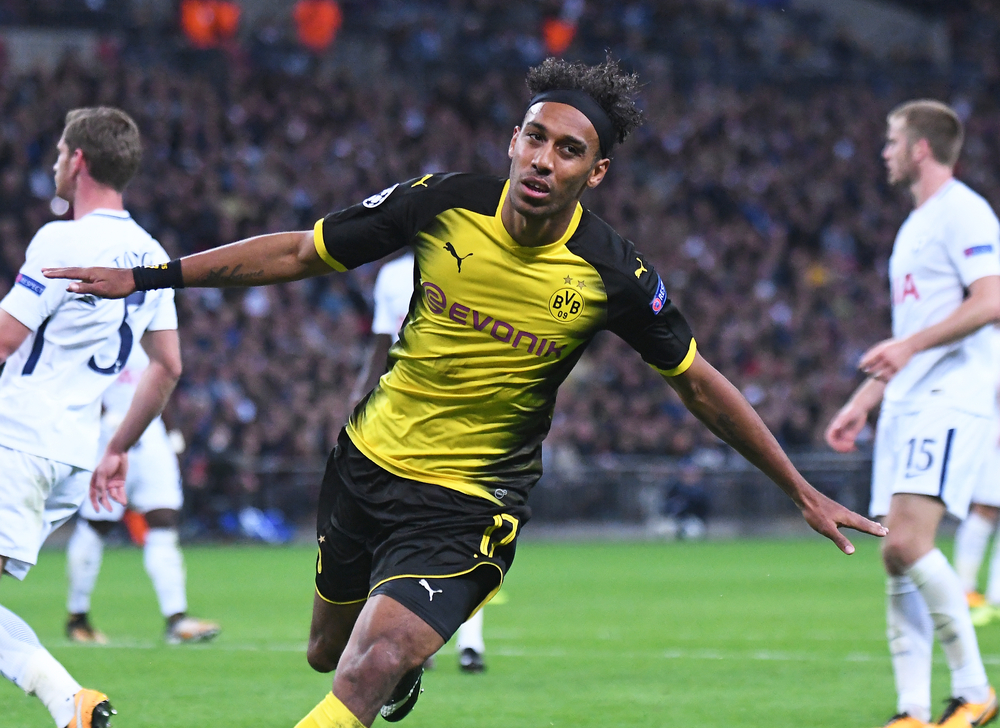 After scoring two and leading Heaton’s defence on a merry dance, Aubameyang trotted off at half-time. According to Mark Douglas, The Chronicle’s Newcastle United editor who went to the game, the Stan were on top for most of the second half. Geoff still sounds rueful when he recalls a couple of squandered chances.

The game was supposed to be the friendliest of friendlies, but someone forgot to tell Joe’s partner at centre-back, Craig, whose bodybuilding frame stacked up against Gabon’s professional athletes. “Craig’s a big lad – if you see him now he’s even bigger than he was then – and he’s quite well known for putting in meaty challenges,” says Joe. “That didn’t go down too well.”

Still, there was a traditional welcome planned for the visiting players and staff after the final whistle. “I’ve played for Heaton Stan for coming up nine years and you get pie and beans after every game – it’s never changed,” says Joe. “It’s class.” Sadly, the Olympians didn’t feel a pie and a pint would fit into their nutritional plans and passed. They did hang about afterwards though.

“The Gabon players were great,” says Geoff. “They signed autographs for the little kids after the game, got their photos took. They signed one of their shirts, the whole team and squad. Aubameyang’s is on that, so that’s a nice keepsake.”

The shirt still hangs on the wall of the Grounsell Park bar. Gabon’s Olympic tournament didn’t pan out as planned – a 1-1 draw against Switzerland at St James’ Park was followed by a 2-0 loss to Mexico in Coventry and a 0-0 draw with South Korea at Wembley that prompted an early exit.

The Stan have enjoyed more memorable days since – they won the treble the next season, topping the league again as well as picking up the Northern Alliance League Cup and the Northumberland Senior Benevolent Bowl. Geoff is particularly proud of a 3-2 win against Julio Arca’s South Shields last season – but the day they took on Gabon stands apart.

“It just came out of the blue,” says Geoff. “They played here and then on the Tuesday or Wednesday night they were at St James’. It was a bit different for them, but they all enjoyed it.”

Read about the time Nedved, Poborsky and Berger warmed up for Euro ’96 in the Czech Republic’s friendly against Bamber Bridge.