March will be a quiet month for Everton for the simple reason that we were really, really bad at cup football. Those early defeats to Ipswich and Sheffield Wednesday have wiped out our diary, which is handy really as we only have about 12 players that I would ever dare to describe as ‘competent’ and they need their rest. But something strange has been happening of late; we’ve been winning games. Having finally given up on wingers Kevin McLeod and Niklas Alexandersson, our all new diamond formation has been paying dividends.

That’s what we stick to for the Birmingham game. Nick Chadwick has scored three in six, Leon Osman is showing signs of nascent quality, Tony Hibbert is reassuringly Tony Hibbert and Lee Carsley is back from injury. And, given that Birmingham have Robbie Savage and Daryl Powell as uncertain wingbacks, we’ll have our fullbacks push up to take advantage.

And it works nicely. Not perhaps quite as nicely as the scoreline suggests. Nico Vaesen, thank goodness, has another harrowing day between the sticks while Richard Wright’s mid-season wobbles are nothing but a fleeting memory. Nevertheless, we make chances, convert chances and then hold it together in our own half. I cannot ask for anything more. 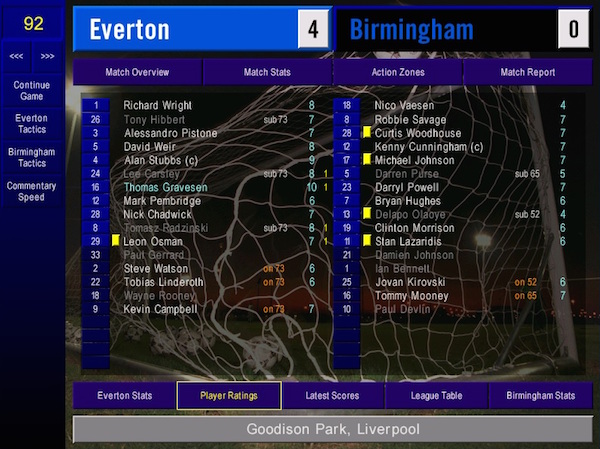 Now, you might be wondering what ever happened to Duncan Ferguson. He was injured at the start of the season, made a few appearances from the bench and then vanished again.  Well, he’s been in the reserves, a team I manage every week in the hope that some obscure youngster will suddenly develop. Unfortunately, he very rarely plays well. And now he seems to have given up. 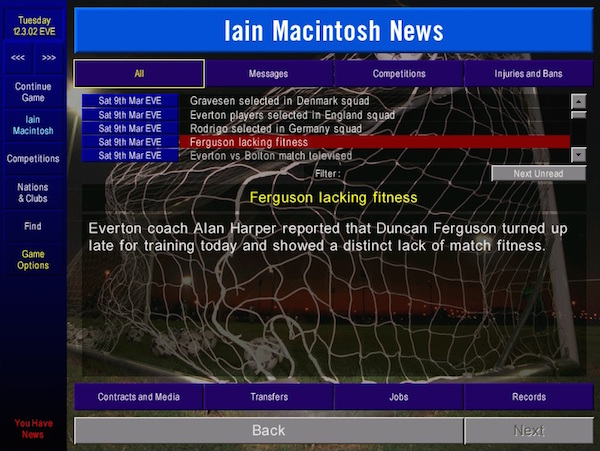 The question that springs immediately to mind is, how did Alan Harper even notice that Ferguson was lacking match fitness? What does that look like compared to his base setting? I can put up with poor performances, I can commiserate with injuries, but I really don’t have the time for players who can’t be bothered to turn up for training. He gets a fine of two weeks wages.  I don’t care who he is or how big is he is, Big Duncan needs to know who’s in charge and I make that abundantly clear in the email I send him from the Goodison Park panic room.

On we go, and it’s time for the profoundly average West Bromwich Albion. We’re in a ludicrous run of form and so there is absolutely no mood for change here. Not that this is just a case of leaning on the continue button and hoping it all works out. Every attacking Baggies’ player is specifically man-marked by their opposite number with Lee Carsley given a zonal role between the lines to provide back-up. 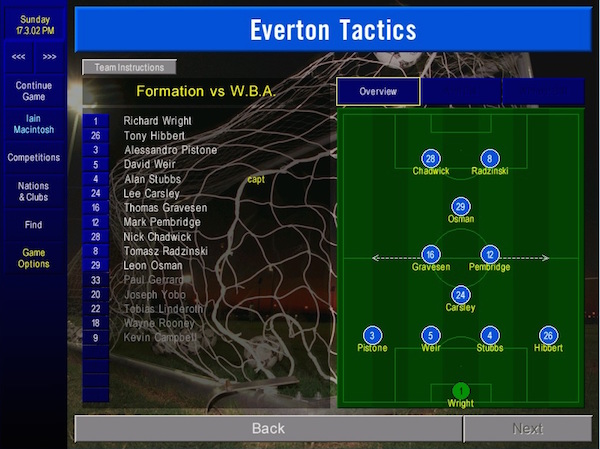 It’s another productive afternoon at Goodison Park. David Weir puts us in front with an early snapshot and we control the game without issue. Shortly after the break, Wayne Rooney is given a chance in his third role of the season, the number 10 slot. Even in this alternative reality, we still can’t decide where his best position might be. In this new discipline, as in all his other duties, he does okay. But he’s only 17. Carsley goes on another one of his trademark solo runs to double the lead and, as is our wont, we quickly shut the game down.

We are now, thanks to results elsewhere, in a Champions League position. But because of our financial situation, we can’t strengthen the squad ahead of the March transfer deadline. And worse still, when Thomas Gravesen, one of my most consistent performers, comes to me looking for an improvement on his £16,000 weekly wage, I can’t do anything. 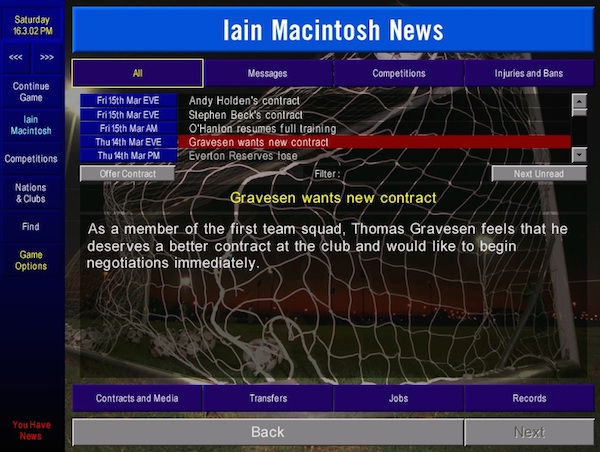 And so naturally, he’s quite upset. And if he’s upset, he won’t play as well as he can. And if Gravesen isn’t playing well, Everton aren’t playing well. This is extremely frustrating and so I pay a visit to the board to find out if there’s anything at all they can do, given that they are £40m in debt and all. 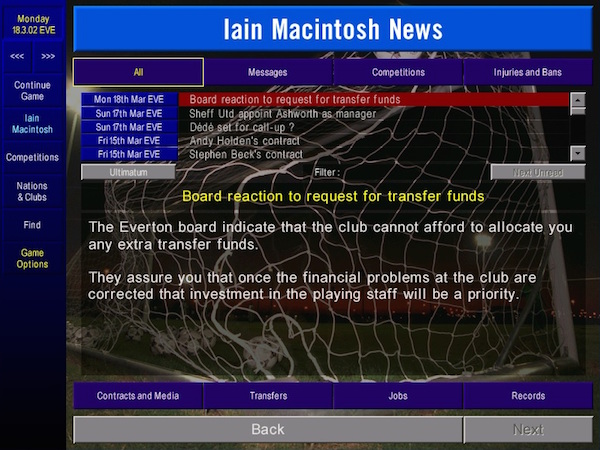 Oh well, that’s fine then. They can continue to enjoy the sanctity of the directors’ box and the nice sandwiches and the good port and we’ll just make do and mend down here on the pitch. We’re fourth in the Premier League, I cannot believe that there isn’t at least one foreign consortium that wouldn’t like a go on us. But there’s nothing I can do about it so I may as well stop whining and take it all out on Charlton Athletic. Same team, same formation, same grim-faced desire to prevail. Get out there and fuck Curbishley right up, you grizzled blue dogs of war. 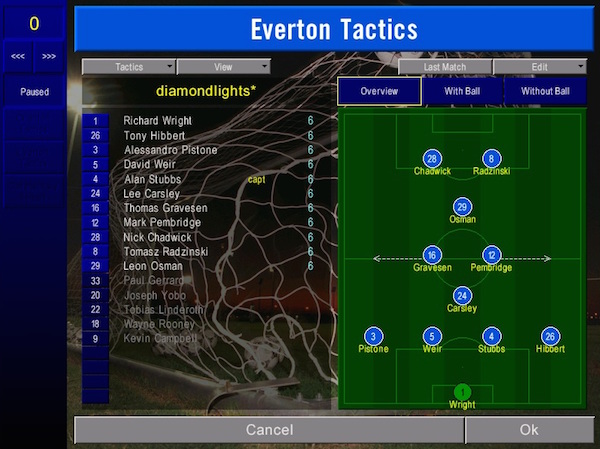 This isn’t a celebration of the beautiful game, this is like chopping wood. We’re methodical and joyless, chop, chop, chop. Chadwick and Radzinski pile in on Tony Williams, but he proves equal to everything. By half-time, we’ve had 14 chances, ten of which were on target. Chop, chop, chop. Williams can’t hold out and he doesn’t hold out out. Mark bloody Pembridge breaks the deadlock on the hour. Chop, chop, chop. Then Kevin Campbell wanders on and wins the game. Down go Charlton with a crash. Job done. 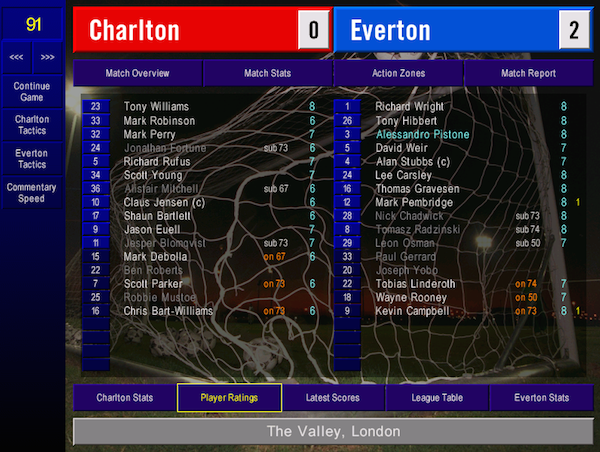 And that’s March. Three games, three wins and still no hope that any of this really means anything. One serious injury will end this momentum as quickly as it started. We have a tough run-in as well. We can’t possibly hope to stay this high in the table. They say that you should always shoot for the stars and then if you fall short, you’ll end up at the top of the tree, but this betrays some serious misconceptions about the practicalities of space flight. If you shoot for the stars and fall short, you end up in a thousand charred pieces at the bottom of the Pacific Ocean. We’ll continue to fight, because that’s what Everton do. But my God, if I had just £1m, I could put this club into Europe. 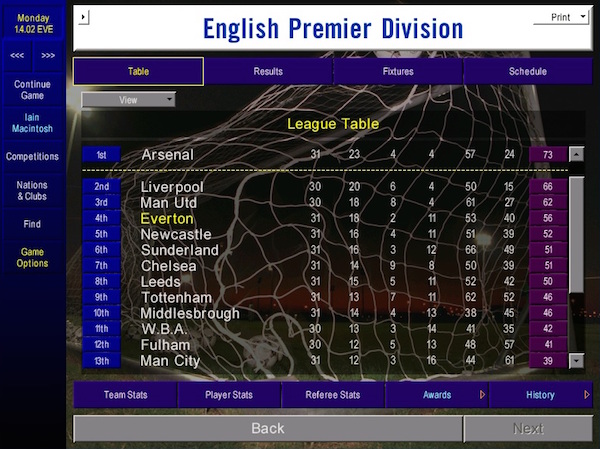 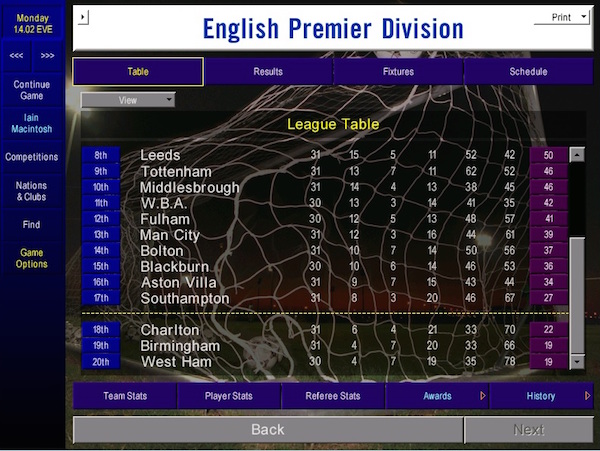 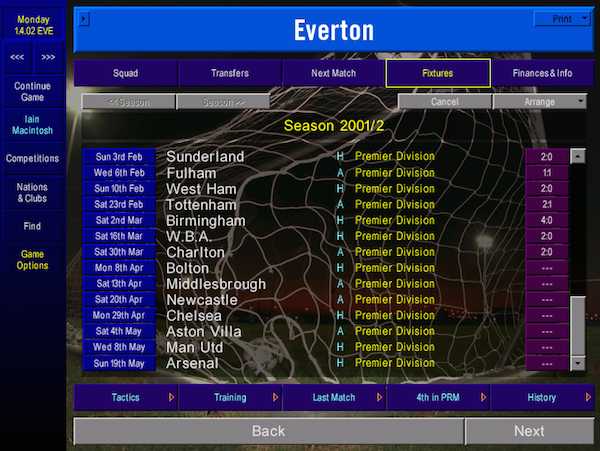 Find out what happened in April 2002 by clicking here.

Hello all, It was a blue day on Sunday but unlike Southampton…